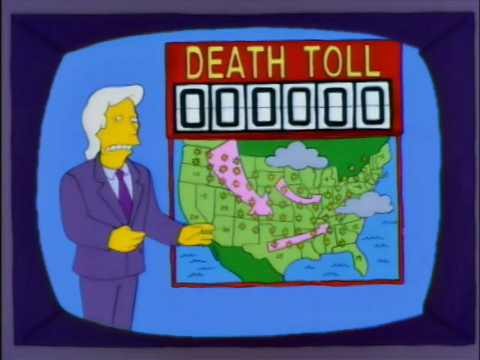 A good mix of bands this month alongside the usual avalanche of mediocrity and nonsensical shouting. Caravels, Off With Their Heads, Hey Vanity, Let’s Talk Daggers, Thy Art Is Murder and Hold The Fight are all worthy of your attention and I suggest you check them out immediately. THANKS!

–
Alkaline Trio – I Wanna Be A Warhol

Rubbish artwork and album title aside, this is the best Alkaline Trio material Iâ€™ve heard since ‘Good Mourning’. It has that fast-paced, punk-riffs of their 2000-ish material down, without sounding too polished in the process. Skiba’s vocals aren’t as rough, but the chorus is catchy enough and there are some nice moog-sounds filtering through their tight, gloomy punk rock. Note: get someone else to do your song titles guys, because they suck the big one.

The Story So Far – Empty Space

Remember the first New Found Glory album? Remember the back cover that has all of them jumping in the air? Thatâ€™s great isn’t it? The Story So Far want to emulate that feeling of elation, youthful exuberance, three-chords and nothing else, still getting away with wearing shorts and jumping around like a sugar-crazed maniac. They’re close… so very close to achieving this dream.

David Draiman states that Device are “like being given a second chance, being rebornâ€¦” is that reborn into making EXACTLY the same music as Disturbed, minus the monkey noises then? Honestly, I feel bad for saying this, but ‘Vilify’ is essentially a Disturbed track, with some annoying glitchy-noises chucked over the top. Actually, having listened through it twice, I can confirm its utter dog shit.

Thy Art Is Murder – Vile Creations

With a vocalist who sounds like heâ€™s vomiting up a billion bullfrogs and some insanely meaty pummelling, Australian mob Thy Art Is Murder are a chaotic amalgamation of death-meets-metalcore-meets-doom. Sickeningly heavy and brutal right to the very core.

*whisper* I never actually listened to Earthtone9 when they were first kicking about…this is okay though, I mean, it sounds like something from 2001 still, but the drumming is a storming barrage and some of the metallic riffs and bass dirge-rumbling is very Mastodon. Vocalist Karl Middleton gives it his all, but I kind of preferred him when he fronted The Blueprint and Blackstorm. Oh well.

Bleed From Within – Uprising

Another month, another slab of meathead metalcore. The duelling vocals add some variation in places, and it’s certainly heavy and contorted enough, in that it writhes and spits twisted, acerbic riffs and dense drum blast-beats.

This actually started off really, really well – it was stepping nicely into some direct, taunt hardcore that reminded me of the breathless, intensity of Touche Amore…unfortunately, Adept seem to fold in on themselves and opt for the predictable safety of Bring Me While She Sleeps The Horizon and the clean vocals are so fucking wet…a shame, as this had real promise, only to be dashed to pieces.

Suffice to say this is very different from the norm. One of the best ways to describe Caravels, is a post-rock track, with some sampled These Arms Are Snakes vocals (fed through a damaged microphone) layered over the top. It’s slightly uncomfortable listening if I’m honest – with no structure, or chorus, ‘Hanging Off’ is a bending, cluttered wail of warped sound.

Off With Their Heads – Nightlife

I wish all music was as joyful and raucous as Off With Their Heads. Their gruff, Dillinger Four punk rock is simply sublime – bursting with alcohol-soaked arrogance, massive hooks and a chorus youâ€™ll be bellowing from the heart. An absolute belter, get on it right now.

Rubbish name, but Hey Vanity have the chops and the right hooks to be noticed amongst the army of alt-rock darlings that seem to have sprung up over night. There’s an unusual tone to their guitars that sounds heavier on their breakdowns than it really should, yet still retain a pop-edge and some excellent hooks.

Not sure about the vocals on this – they seems so brittle, like they are about to shatter into pieces. H RV RD make expansive, and somewhat bloated rock, that is filled with stylistic changes (I mean, the beginning sounds like a folk song, rapidly getting faster, before exploding into a bombastic Radiohead-esque, sweeping passages of sound and ambient noises). Not sure, but worth investigating.

Great stuff from Let’s Talk Daggers, who sound like This Flood Covers The Earth (great band, check them out) but even more bonkers. Riffs are splattered everywhere on this, like some kind of math-rock carnival – there’s what sounds like a glockenspiel halfway through and some more cock-rock-tastic shredding. A wonderful, refreshing and hilarious slab of peculiar party punk.

Tear Out The Heart – Undead Anthem

Hold The Fight – Face It Kid, You Can’t Build A Bridge Out Of Algebra!

This is fantastic – stripped back, acoustic rock that feels like a punk band bursting at the seams, but has forgotten to plug their guitars in properly. The jangling, erratic nature, coupled with the gang and gruff vocals shouts add a nice dimension to something that never really approaches heaviness, but still packs a powerful punch of odd-ball energy, rhythm and uneven structure.

Yet another oddball one here. Nylon Sky are 90s style, big rock in the same vein as Feeder in places, but you know, better – with some brilliant slurred vocals, quirky rap-rock sections and a lush guitar sound that drenches their sound with a wailing cacophony of looping sounds and shapes.