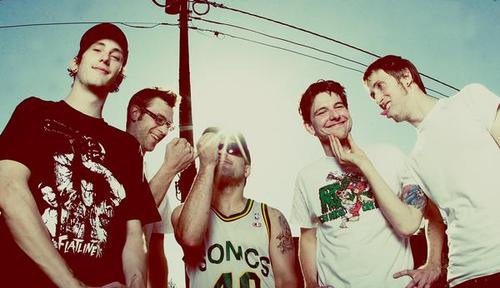 This month’s CD is jam-packed with good. The only duffer is the first track by I See Stars, which is a load of balls. You definitely need to check out Black Dogs, A Wilhelm Scream, Hildamay, A Lot Like Birds, Malevolence, Roam and Into It. Over It. All good eggs as far as I’m concerned. Playlist for your listening pleasure.

The squawking sounds that open this are reminiscent of someone attempting to play a kazoo underwater. Then the unremarkable metalcore assault hits and before you know it, there’s a sudden change to Dragonforce-guitar noodling and some shrill, high-pitched warbling which is utterly barking. This is like chucking pieces from 5 different puzzles up in the air and then trying to fit them all together. It doesn’t work – it’s frustrating, annoying, rage-inducing and more importantly – stupid. Nothing to see here, move along.

Heart Of A Coward – Nauseam

Heart Of A Coward sound a lot more intense and concentrated now. The vocals are dripping with spit and throaty, guttural urgency, whilst the riffs are down-tuned slabs of agitated, scratching hate. The technical intricacies bring to mind the snarl of early Deftones and I’m reminded somewhat of fellow Milton Keynes-metallers, Tesseract, which means two enthusiastic thumbs up!

Speed and breakneck splatter punk make up A Wilhelm Scream’s sound – they’re a band made to soundtrack kick-flipping over a dam. Born A Wise Man holds some tight-technical riffs you’d associate with Strung Out, yet has that bounce and drive of Lagwagon at their most anthemic. This is punk rock given a much-needed adrenalin shot of vibrant urgency; guitars overlap and collide in a mash-up of high-fives and warped excellence.

Clear-cut poppy-punk from the UK in the form of Polar Bear Club, who weave bouncing, summery choruses of New Found Glory with the joyous rock of Echo Park-era Feeder. There’s a lot to love about this; you can see the hooks threatening to impale you as they tear in; but as far as originality goes, it makes a fairly soft impact.

Big rock theatrics from Hildamay, who combine melodic hardcore with blisteringly powerful anthem-like choruses in this brief 2 minutes and 20 seconds of crunching aggro. The vocals range from a roaring impassioned bellow to a crooning, deadpan of bitterness.

Days Hell? Day Shell? Daysh Ell? Oh well. Ex-singing guy from metalcore mob Of Mice and Men. Don’t expect lots of screaming and de-tuned riffage though. Dayshell feel like they’re pushing through the wall that divides alt-metal and huge choruses and is mashing them together. There’s a lot of weird soaring passages of expansive sound, beneath the sharp, clattering drumbeats – it’s different and fairly striking and oddly beautiful in places.

Taken from a concept album about a house, A Lot Like Birds certainly have a lot going on. Packed into these 3 minutes and 21 seconds is a spiral into various conflicting genres, style shifts and wrought breakdowns. This is like a huge flock of our feathered friends taking flight and flapping around your head – there’s melodic punk rock, tappy-math rock, screamo and shouty hardcore all shoe-horned in to an incandescent template of feathers and choking cries – brilliant but bizarre.

The album is called Reign of Suffering – so THINK HAPPY TIMES YEAH? This is fucking great for so many reasons. It kind of reminds me of Killswitch (think lots of pinch-harmonic squeals), double-bass drum frenzy of determination and some arm-swinging, windmilling chaotic jock-hardcore, delivered by a barking mad-feral bear creature. Genuinely brilliant, groove-filled metal-mosh times, with all the right twisting, aggressively sleazy guitars you could EVER wish for.

Yet more metal, but in a slightly different vein to Malevolence’s “everyone in the pit right fucking now” stance. Death Remains still want you moshing, but this is more technical and crisper. The vocals are a straining, hoarse bellow of frustration and rage, yet the chorus reigns this in by following a fairly melodic path.

An instrumental offering that actually says a lot. Bleakness appears to be a theme – Black Dogs are billed as Northern hardcore, but this title track is something else entirely. Clocking in at 99 seconds, it builds on a wall of explosive, volatile post-metal riffage that absolutely crushes with Pelican-style head-nodding jerks and chilling spite.

Getting pretty fucking shouty around here it seems. Right, I know I’ve heard that guitar sound and riff before and it’s driving me mad, because it sounds like something I heard years ago and loved. Fitting into that chugging, aggressively barbaric template formulated by Johnny Truant, High Hopes sound like they’ve borrowed HEAVILY from that 2003-era…and I think it’s HONDO MACLEAN I CAN HEAR. Okay, props to this for stirring up memories of bands I listened to 10 years ago because for some reason I really like this. (Although, I’d think of a new moniker as this one is a) a bit shit and b) I found 2 other bands with the same name when trying to google High Hopes. Not good.)

The video to this is them essentially playing in someone’s front room. That front room is no bigger than a very small cupboard. Backwards baseball caps and crowd-surfing are mandatory and Roam are all about the fun – double-fast drumming, sugar-filled, head-nodding riffs, quite samey-dual vocals (which is a shame) but they’re having an absolute riot. Whilst it’s pretty much The Story So Far meets Basement meets This Time Next Year, you can’t go wrong with pop-punk and Roam have it down right to the three chords and vest tops.

Into It. Over It. – No Amount Of Sound

Goddammit, just got something in my eye guys. This is stunning; Evan Weiss makes wonderfully heart-felt emo-rock in all it’s scuzzy, Jade Tree records glory. Nods to The Promise Ring, proper feelings and drinking beers on a summer night spring immediately to mind and it’s absolutely glorious in every way possible. Also reminds me of Brand New, circa Soco Amaretto Lime albeit with more fuzz.