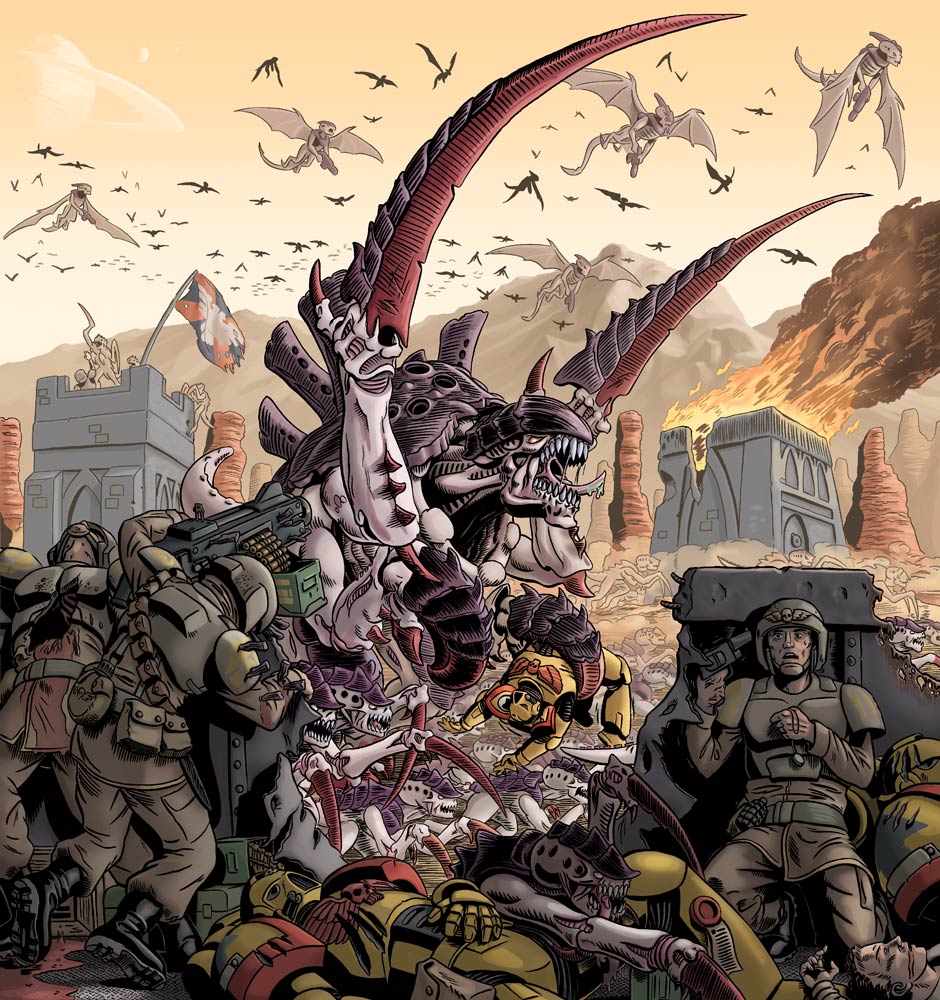 The Rock Sound CD reviews are baaaaack. What’s hot this month? Well, We Are The In Crowd and I Am The Avalanche bringing some punk rock delights, Architects and Buried In Verona getting all shouty, Wild Throne for being fucking spazzcore lunatics, Nothing sounds LOVELY, Weathered Hands and Broker getting gnarled and gritty and Sea Bastard chugging DEM RIFFS.

Somehow reaching new levels of predictability (or should that be old?) Issues are the kind of ‘checking your watch’ fodder that will make you say “shit son, this stuff is still being made?” Take metalcore, mix in the clean vocals, some dude mashing a synthesiser and guitars that sound like they’re from nu-metal back in 1995 and you have Issues. The gospel choir, clappy-hands bit in the last 50 seconds is a total “what the fuck?” moment and is the only redeeming feature on this. Frankly, over 5 minutes of that would have been preferable to the tedium beforehand. Issues? Got lots mate, especially with the relevance of this nonsense.

We Are The In Crowd – Long Live The Kids

HittingÂ them heartstrings, We Are The In Crowd are a difficult band to hate. They do pop-punk just right; skyscraper sized choruses clatter into their early Blink-182 bounce, whilst the delicate, soaring piano during the intro compliments Tay Jardine’s breathless, husky-vocal drawl. This is apparently the opening track to their new album Weird Kids and it’s an absolute banger – fist-pumping, if a little earnest, emotive rock that should break them out from under that Paramore shadow.

Well, they certainly like ‘building’ a lot of shouty noise? Eh? Eh? Nevermind. The shouts of Â the song title, “NAYSAAAAYYYYEEERRR!!!!” are brimming with utter, boiling contempt – raw, bloodied anger erupts forth from vocalist Sam Carter, whilst the contorted metallic attack behind it all is a scathing onslaught. Yeah, it’s somewhat derivative in places, but there’s somewhat of an atmosphere; an uncomfortable pendulum hanging in the air to Architects and their gnarled sound.

I Killed The Prom Queen – Thirty One & Sevens

This is tiresome. More rage-filled metalcore splattering everywhere, but it just becomes an indistinguishable hail of white noise and boredom. This also sounds incredibly badly produced. The guitars are muddy as hell and lost behind the rasping, relentless screams, which you’ll be sick of by the 2 minute mark. Horrible, ugly, stupid music for people who don’t like music.

Sticking to their sound, Comeback Kid to hardcore punk they way you want – fast, loud, fist in the air, diving on top of some poor sod’s head and doing the combine harvester down the front. Vocalist Andrew Neufeld knows how to charge a song full of relentless adrenalin and the backing vocals of “WWOOAAAAHH-OH-OH!” sound like an legion bellowing behind him. Anthemic, driving punk that knocks the shit out of anyone saying otherwise.

Going for the stadium rock anthems seems to be what Taking Back Sunday do now. Disappointing? Reluctant to say that, because this is the 3rd album with the original TBS line-up and any hope of having Tell All Your Friends 2 may still burn bright, but after their self-titled album in 2011, I can’t see them treading that path again. This needs more John Nolan as well. Okay, so it SOUNDS like TBS, playing a Biffy Clyro song and it does sound huge – it’s bursting with theatrics; Adam Lazzara’s voice is pure flamboyance and full of exuberant good times, it’s hard not to feel moved. I have to say I warmed to this so much after 3 listens – a slow-burner perhaps, but it’s good to hear from them again.

I Am The Avalanche – Two Runaways

Those still morning the loss of The Movielife (guys, it’s been ELEVEN YEARS) I hope you’ve been checking out I Am The Avalanche, because if not, shame on you. Two Runaways is a rampant blast of energetic, buoyant street-punk, in a similar vein to The Dropkick Murphys playing Four Year Strong songs. “HE’S GONNA MARRY HER! HE’S NEVER GOING TO LET IT FALL APART!” bellows Vinny Caruana, meaning every word in his rasping, New York accent. A chest-beating, bounce of catchy, vibrant punk rock.

Glitchy, technical metallers Buried In Verona don’t waste any time piling riff after riff into the back of their van of experimental noodling and crashing it into a big wall of fire. Scathing and scatter-brained, this is littered with subtle synths and echoing strings, whilst the wall of blast-beat drumming and sudden changes to trippy, ambience might put some people off, it’s the way it’s so seamlessly done, without any pretension that makes this actually a fairly decent listening experience.

Carnifex – Dragged Into The Grave

Sadly, not a band consisting of this, using a bio-plasma attack. Another reason why deathcore is total macho-dogshit awful nonsense that needs crushing beneath D6+1 attacks, no armour saves. Beyond unlistenable bilge.

Formerly known as Dog Shredder, Bellingham’s Wild Throne are disturbingly erratic and vibrant. Technicolour thrash metal collides with stoner, jazz-punk and odd elements of math-rock to create a howling descent into both madness and cleansing destruction. The vocals change from a haunting, large-ham wail, to hollow screams of fiery rage, all under this relentless Â fusion of prog-noise-metal bonkers. You might think this sounds like a trainwreck, but Wild Throne sound interesting – they’re brimming with substance and experimental fusion of metal genres into a listenable ball of excitable, dizzying noises.

If you’ve ever listened to Touche Amore and felt they were a bit to ragged and serrated in places, but still liked their raw, emotive outpourings, but wished they had a more punk rock edge and massive choruses, then Weathered Hands are the band for you. Melody + aggression + feelings create the warming, uplifting and expressive sound that Weathered Hands have obviously honed and crafted over several years and it sounds fantastic.

Nearly skipped this after the sickly auto-tuned introduction. BANDS STOP DOING THIS PLEASE. It immediately sounds hollow, fake and really grating. Natives do slick, well produced pop-rock and while it doesn’t lack in enthusiasm, the lyrics are somewhat formulaic and everything is perhaps too squeaky clean and shimmering. Conflict, strife and heartbreak seem to dominate Going In Alone, but is it convincing? I’m not buying it, but there’s room for growth here and the chorus is built on a massive pile of hooks.

Oh my. This is just magic. Philadelphia’s Nothing soar on wings made of feedback, ethereal, lost-vocal whispers and layers and layers of scrawled, chewing guitars. Giving hefty nods to psychedelic 90s rock and the gnarly, industrial punishment of A Place To Bury Strangers, this is a captivating and dreamy assault to the mind, body and ears. Absolutely bloody brilliant.

The sharp, jagged edges that make up Broker’s sound feel like they’ll break off, should you brush past them and become embedded in your skin. This is spiky, abrasive punk rock, fed through the Therapy? filter of snark, mixed with the disjointed riffs and time-signatures of Pulled Apart By Horses and the gritty, rumble of Hawk Eyes – excellent in every way possible. Job Song is a free download on their Piping Hot EP so no excuse not to get on this immediately.

Sea Bastard – Nightmares Of The Monolith

Just found out Sea Bastard released an EP last year called Great Barrier Riff. YES! No good times here, Sea Bastard bring waves, oceans and monsoons of crushing, reverberating desolation through a caterwaul of guttural vocal belches, screams and snarls, whilst the stoner-meets doom metal riffs plough onwards. Punishing, brutal and all-consuming sludge that’s uncomfortably filthy and despicable in every way possible. Why not get some bastarding done in the sea, and download their EPs yeah?