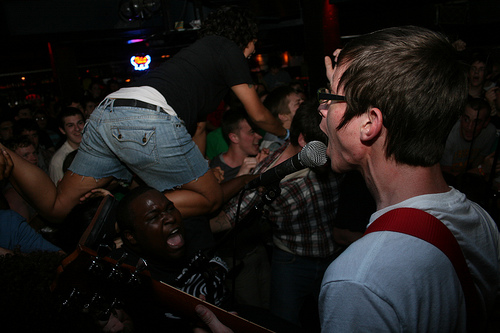 Twin Atlantic â€“ The Ghost of Eddie
This actually gets better with repeated listens â€“ at first, itâ€™s kind of flat and a bit â€˜rock by numbersâ€™; but itâ€™s a real grower. Thereâ€™s some storming moments, especially the crunching last minute and a half, which lurches with a Pulled Apart By Horses, grungy strut of sporadic power.

We Are The Ocean â€“ Overtime Is A Crime
This is about the 3rd time We Are The Ocean have appeared on one of these compilations and this is easily their best effort. Less grunge and more big Alexisonfire-soaring choruses, non-existent screams and instead opting for a twisting groove arranged around some good-overlapping dual vocal barks and succeed in delivering some excellent post-hardcore and a brilliantly infectious sing-a-long chorus.

Title Fight â€“ Shed
Great lipsy, rasping voice on the vocalist of Title Fight. He doesnâ€™t so much shout the words, as splutter them out with a confusing amalgamation of disgust and zest. Thereâ€™s moments of early 90s emo rock, spliced with an obvious disgruntled Hot Water Music-ish scrape. â€œSHED YOUR SKIN, FIND A BETTER BODY TO FIT IN!â€ â€“ Ticks the right boxes on feeling socially awkward at least.

Balance and Composure â€“ Quake
Not a re-imagining ofÂ a popular first-person shooterÂ soundtrack then â€“ *stops paging Trent Reznor*. Balance and Compsure match up two conflicting styles â€“ at times, they sound quite lethargic, yet â€˜Quakeâ€™ is an angry, bitter-sounding track and the vocalist, despite his drawling tones, matches a drunken, dreamy inflection with some harsh vocal yelps alongside crushing rock in the vein of Taking Back Sunday.

This Will Destroy You â€“ Communal Blood
3 minutes in and this just starts to get going â€“ milking it much guys? Distorted, completely incomprehensible post-rock meets noise chaos; would perhaps slot nicely in on the Gears of War 3 soundtrack. Then again, it sounds like theyâ€™re completely ripping off Martin Oâ€™Donnell, but have made everything that bit louder and drenched in more feedback.

The Cape Race â€“ Barcelona
Absolutely massive sounding this â€“ but that ever-so-sugary sweet that it just doesnâ€™t settle right. If it was any more polished, the light bouncing off this would burn straight through your retinas. Confident, booming vocals backed by some tight, meticulous indie-rock, but all feels a bit â€˜havenâ€™t we heard this before?â€™ At least theyâ€™ve got the gusto and they actually sound like they mean and believe it and not â€˜by the numbers.â€™

The Computers â€“ Cinco De Mayo
Something that actually sounds and feels like a punch in the face. The Computers play gritty, malicious punk rock that leans heavily on that Swami sound, mixed with a scuzzy, rockabilly tone. Vocally, it sounds like Tom Hudson of Pulled Apart By Horses after several bottles of scotch and an all day screaming contest fronting a Turbo A.C.â€™s covers band. An excellent, strutting racket of sneering, quiff-driven punk.

Young Legionnaire â€“ Chapter, Verse
Hey, itâ€™s Paul Mullen from yourcodenameis:milo! Ah, those vocals…he sings like someoneâ€™s whoâ€™s incredibly disappointed with his target, but loves them at the same time. Kind of a bitter kindness. â€˜Chapter, Verseâ€™ by this new Mullen project (featuring the bassist from Bloc Party) sounds….well, like milo really; somewhat heavier in places â€“ also has that same crunching guitar whine from â€˜All Roads Lead To Faultâ€™ for some reason and has moments of Amplifier space-rock pretensions.

Page 44 â€“ Answers
Struggled to get through the vocals on this â€“ they did get better, but it sounded like he was swallowing his tongue to begin with. Incredibly tired-sounding, plodding indie-landfill, with few redeeming features, although the breakdown near the end saves it from being completely tedious. Also, the EP that this comes from features THREE different versions of this song for some bizarre reason.

Skindred â€“ Game Over
â€œGAME OVER, MASTER CONTROLLER!â€ Props to Skindred; they surprised me with their excellent live show at Slam Dunk last year and this from their new album, â€˜Union Blackâ€™, is damn impressive. A cluster-blast of metallic punk rock, odd sampling and synth bleeps, coupled with Benjiâ€™s quick-fire rap attack. Nu-metal nu-reggae survivors are indeed victorious!

Revoker â€“ Thief
Speaking of nu-metal….why bands feel they need to breathe fresh life into this scene…god knows. Now, Iâ€™m a massive apologist of the genre, but it sounded good BACK THEN and is best as a nostalgia tool. Thereâ€™s some good riffs here mind and the kind of hilarious â€˜macho swearyâ€™ lyrics that The Union Underground would probably enjoy.

Social Suicide â€“ The Last Martyrs
Thereâ€™s about 4 bands called Social Suicide â€“ Jesus Christ guys, pick a unique name or something. Anyway, THIS Social Suicide are from Norway â€“ donâ€™t expect another KVELERTAK though (sadly) as they sing in English. This has an edge over most hardcore though; it sounds pretty damn scratchy â€“ distorted bass, clattering, tinny drum hits with some nice mathy-parts, gang-vocals aplenty and the feeling that it was recorded on a pirate ship, although I canâ€™t explain why.

DeafHeaven â€“ Violet (Edit)
A complete curbstomp of thrashed to death, black metal chaos chucked into a twister and then recorded near a thunderstorm. Epic destruction.

–
Links
See above (note, And So I Watch You From Afar were featured on this, but as Iâ€™ve reviewed the album already I didnâ€™t see the need to talk about â€˜Search.Party.Animalâ€™ again, even though it is AWESOME.
–
By Ross Macdonald