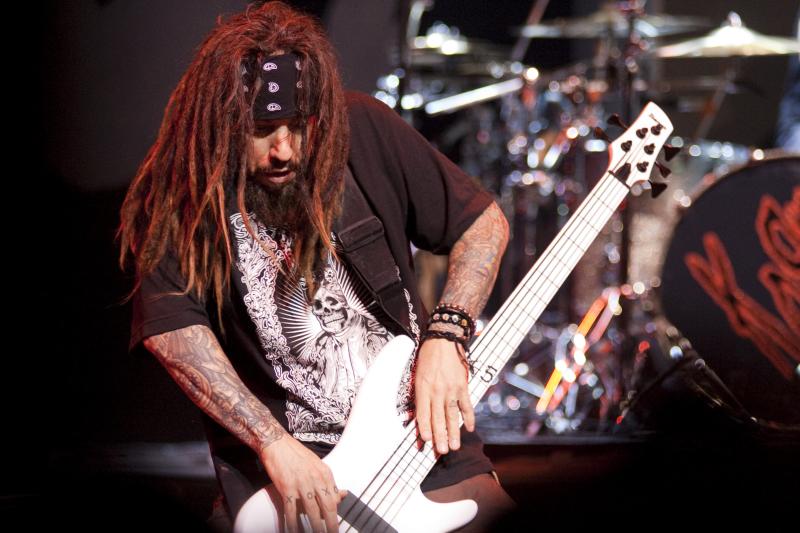 One of the best things about the new Rock Sound mag is the picture of Fieldy, who seems to have arms bigger than my body (this could be due to camera angles and not the fact he’s recently got two tickets to the gun show). He’s also going pretty grey (well, his beard is). Still rocking the dreadlocks like a badass. Far too much of Jono Davis though; I want to hear what Fieldy has to say about his jazz-fusion album, ‘Sobriety’.

On paper it should work â€“ that metallic, punk rock edge, shouty vocals, hardcore lean â€“ I should love Cancer Bats. Giving them another try â€“ guys, this still doesnâ€™t cut it for my ears. Somehow Iâ€™m missing out, but it seems so devoid of passion, originality and any sort of memorable hook.

The party-vomit train that is Municipal Waste heave back on to the scene then with yet more punk-thrash stupidity. This is ok, nothing special – it pretty much does what it says on the gore-splattered plate of chunder. I mean, the wheel remains unbroken so why upset it?

The choir backing vocal bit is the only part I like. As for the restâ€¦where to start Take the most watered-down, fist-clenching, power-stance, hair-flicking stadium rock imaginable and distil it to the point when it actually makes Nickelback seem like The Dillinger Escape Plan. Beyond thunderdome levels of awfulness.

Genuinely thought Taproot had split up ages ago. Itâ€™s alrightâ€¦doesnâ€™t sound like theyâ€™ve progressed at all â€“ I mean, why screw with a winning formula? Hmmâ€¦apparently Durst left them some angry voicemail message about wanting to fuck them or something. They do get Stephen Hawking on guest vocals though, so more of that please.

Great vocals â€“ a blaring, incredulous shout over some tortuous hardcore, that seems to bend and contort through wanting to break out of the metal pallet, but becomes entangled in this mathcore chain. Can feel a slight auto-tune on the backing vocals, but thereâ€™s enough crushing riffs on here to sort that out.

Thank holy batman. Yes, Iâ€™ve been listening to Touche Amore, Ampere and La Dispute as well â€“ GOOD FOR YOU XERXES! This is hot shit â€“ a minute of vocal-scrapping, dense, tinny howling hardcore. Get on it immediately â€“ vital.

This sounds like the devil rising up behind me ready to snap my neck. You Slut! throw several styles into the mix â€“ Adebisi Shank-style bass plucking, jagged, splintered guitar twangs that writhe in and out of each other, whilst this vibrant colour-splat of technical sound hammers away with such radiant and breathless energy. Rollicking instrumental, with an emphasis on the mental, rock and my new favourite band. Get on this immediately.

We Are Knuckle Dragger â€“ Mucker

Itâ€™s no surprise to read that Steve Albini produced We Are Knuckle Dragger. The production is like scraping your bare knees across a garage floor about 17 times. â€˜Muckerâ€™ lurches and heaves with all the pride and dignity of a drowning swimmer. Completely unhinged; the bass drones like early Mclusky, whilst vocally itâ€™s reminiscent of a maniacal preacher you see in shopping centres on weekends, bellowing how â€œweâ€™ll all burn in hell for holding hands.â€

If this is supposed to be rejuvenating a genre thatâ€™s lost, frankly, Iâ€™d rather the genre stayed on an island in some mystical time portal with a polar bear than exist again. Itâ€™s not terrible, justâ€¦frustratingly bland. Sure, Iâ€™m all for bringing ska back, but stop falling into the same patterns of 10 years ago. â€˜Canâ€™t Take No Moreâ€™? Only about 15 other bands have already used that song title for a song that probably said EXACTLY the same thing. Christ, just sing about travelling or smoking cigarettes.

Attention Thieves â€“ Youâ€™ll Be The First One

The name rings a bell. Oh yeah, I have heard these dudes before. Letâ€™s make the choruses as big as possible, skyscraper high. Itâ€™s like a punk version of the Foo Fighters; or at least falls somewhere around â€˜The Colour and the Shapeâ€™-era sound, with a Jimmy Eat World emotional ties. Heaps of passion piled into this, great work.

I can see the comparisons to The Clash â€“ very sparse mind, but they exist certainly. Itâ€™s catchy â€“ damn catchy to be fair to them. An obvious dig at those who donâ€™t really appreciate music, which kind of harks back to a time The Skints are trying for and failing at. This is better in all respects, as at least thereâ€™s this raucous, snotty attitude.

Everyone thinks theyâ€™re brutal with tinny production huh. Seriously though, Palm Reader sounds as if their singer recorded his vocals in a massive church. The rest of the band lurch and rubble through some taunt and twisted chaotic hardcore. This is how to do it â€“ not only does your vocalist sound like heâ€™s being sacrificed in some temple, whilst everything else sounds so bleak and punishing. Top marks this month for Palm Reader; this shits all over Cancer Bats.

Dear River Jumpers, this song has made me smile loads. Pop-punk done with such direct passion and face-splitting grins always feels good. Stealing heavily from the Copyrights (good work) â€“ this Brighton lot are fresh-faced, brimming with summer-drenched chords and bouncing fist-pumping hooks.