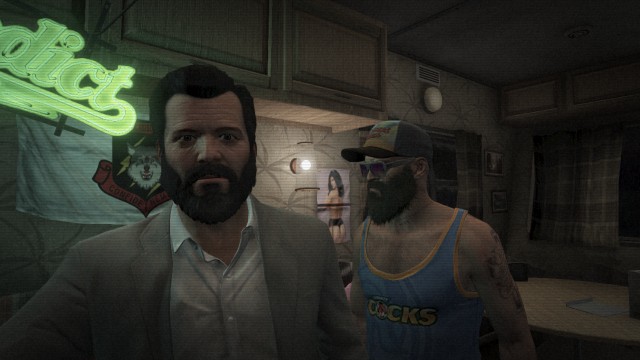 Infrequency of blog updates is down to two things – I’ve been on holiday for the last 4 days and a certain game has been released that involves relinquishing individuals from the burden of their mode of transportation so that I may launch it off a ramp into a police helicopter.

This is surprisingly a lot better than I thought it was going to be. Having ditched their screamy singer in 2010, Deaf Havana seem to have been going down the alternative-rock meets pop-punk route and sound all the better for it, quite frankly. Kings Road GhostsÂ taps into that Americana-sound, full of swagger, Â with a touch of Gaslight Anthem thrown in and its crisp, soaring chorus is captivating.

Jeremy Bolm’s vocals are savage cathartic. That dude knows how to scream and his raw, bleeding cry is a unique and powerful siren in hardcore. Just Exist is a lot heavier and denser than their previous work – a body of bludgeoning drum rolls and scrambled riffage dominate the mid-section and the sudden conclusion is typical of their abrupt, stabbing sound.

Massive europhoric style club drop on the chorus just waiting to happen. I predict this will be remixed in about a year or so and you’ll find it propping up playlists in any number of nightclubs. Seriously, you can see this from space. All credit to Kids In Glass Houses; Â this pop-rock-dance mash-up is soaked in the kind of melodies and summery good times that you will either love or hate with utter contempt.

Some weird, distorted church bells, several warped, contorted riffs that don’t go anywhere, generic screams and stop-start drumming and yet more confused guitar-work make for something that is so embarrassing, I’m struggling to work out how the person producing this wasn’t exploding into fits of laughter because there’s no way on this earth that anyone would consider this a finished. Fuck off.

Dumb-ass LAD-core bleating from TRC, who actually sound a lot better on than any of their previous material. Like 2 Danny Dyers fronting Raging Speedhorn, by way of THE HELL. This is meaty, wind-milling hardcore that is incredibly well-produced, taunt and fairly striking. The dual-vocal attack is abrasive and caustic and despite the somewhat generic beatdowns, this thunders along at an almost unrelenting speed. Proper tunes, proper haircuts and proper mosh-pits guaranteed.

No surprises that New Found Glory guitarist Steve Klein produced State Champs album, The Finer Things – this has that unmistakable, amp-jumping, pogo-friendly structure that made the NFG self-titled such an essential record for those who loved skateboarding and heartbreak. With the kind of gut-punch energy of The Wonder Years, State Champs hit the ball out of the park with their gutsy and joyful spirit. Like pop-punk? You will FUCKING love this; it’s not revolutionary in the slightest, but it’s an absolute blast.

Absolute shite album title aside (Tomorrow We Die Alive – you may nowÂ commence cringing), Born Of Osiris do the deathcore thing fairly well. The keyboard lines as so lavish and pompous they feel somewhat comical on a track that I’m assuming is full of rage and mechanical fury. I mean, this would make jock-hardcore bands want to give up and go home; it’s fairly tech, with a touch of eastern-metal breaking through and extravagant guitar work that wouldn’t look out of place on a Dragonforce record. Verdict? Surprisingly listenable.

Have no idea what 65Daysofstatic actually are any more. Like Adebisi Shank, this is future music. I sometimes wonder if we were even ready to hear this, but it exists. It’s not the tribal dance-party vortex of say Crash Tactics, but instead, Prisms is a hypnotic and submersing descent into a new world. Mind bending in the same way Three Trapped Tigers are such a musical oddity, this brings new depths and vibrant, technicolour explosions to 65’s delerious sound.

Like TouchÃ© AmorÃ©, Modern Life Is War are another hardcore band who stand out from the crowd. Jeffery Eaton’s barking vocals on Fever Hunting are reminiscent of a gruffer, Jeremy Bolm, whilst musically their taunt and abrasive hardcore is packed with fractured melody and is somewhat wistful with moments of terse, spitting rage shining through.

The overuse of paranthesises, not to mention the fact they’ve managed to find some scrapes left in the metalcore barrel aren’t doing Saint(The)Sinner any favours here. The shouty vocals are beyond appalling and should have been immediately shelved, whilst the clean parts are at least in tune and do a reasonable job. It’s crap basically, but not as crap as The Devil Wears Prada, so they can wear that as a rather shit-stained badge of pride I guess.

The Charm The Fury – Carte Blanche

What started as hardcore-punk gang vocals went down the rabbit-hole of Walls of Jericho meets Arch Enemy-style riff-hailstorm. Good! The Charm The Fury are a Dutch five-piece making catchy, volatile metal that you don’t realise is melodic to the very core, yet still packs a rasping, hollow, face-smash of grim punishment. Props to the jock-hardcore moments that really do elevate above other metal bands I’ve heard this year.

We Never Learned To Live – Kepler

Man, it’s getting wrought in here. We Never Learned To Live channel unremitting amounts of wounded, howling outpouring into this 9 minute wall of sharp, ugly guitars. Misery levels are ramped up, as from 6 minutes on, everything gets louder and more and more uncomfortable as this turbulent spiral of not-quite-noise-metal hits a new peak of distraught helplessness and fear, finishing on a sorrowful, hopeless piano outro.Â This is a pay what you want download as well – no excuses people, this rules hard and is utterly devastating.

Well pop-rock isn’t it? Through Colour see an over-saturated market and dive well in. This kind of reminds me of Sugar Ray, which you can take as both a compliment and a pointing and laughing loudly at you in the street kind of insult. You’re talking about a track that makes you want to feel good and I totally get it, unfortunately that whiff of something you’ve left in the back of the fridge is quite pungent.

The First actually surprised me with how accomplished this is. Despite their somewhat uninteresting moniker, their music is an intriguing prospect. A pop-punk opening rush, that suddenly turns into an overlapping barrage of garbled, cluster-fuck of vocal screams and when the actual lead vocals kick in it somehow stumbles back on track. Bridging that gap between what melodic punk rock and gruff, stamping hard rock, The First impress greatly.

No idea what The Red Paintings are on. Kind of fitting into a industrial rock template, this then twists another direction, feeling like something Junius would record if they discovered programmed beats, whilst the harsh vocals give a nod to Trent Reznor around the time when he wasn’t full on, angst-filled rage machine, but getting close. Definitely worth investigating.