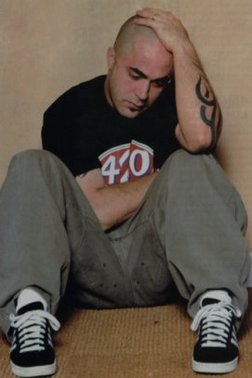 In the words of Staind, it’s been a while since I’ve done one of these, mostly because a) I haven’t bought Rock Sound for a few months and b) I’ve devoted my allotted magazine reading time to Xbox 360 Gamer and Razzle.

The Ghost of A Thousand – Running On Empty

This sounds a bit like The Bronx, instantly awarding The Ghost Of A Thousand two very enthusiastic thumbs up. You could be forgiven for thinking the scratchy vocals are that of Matt Caughthran, such is their raw hoarseness. The music itself is a persistent car-pile-up of punk rock and really itâ€™s quite excellent and a decent start. It also begs the question why I havenâ€™t listened to this band before. Needs more backing vocals as well.

Anti-Flag – Bring Down Their Wall Again

I see Anti-Flag havenâ€™t changed much since I last heard them. I still stand by the fact that they will never top ‘911 for Peaceâ€™ which is pretty much perfect, but this is by the numbers, fist in the air, shout-along, rabble-rousing punk, which is decent by their standards, but feels like something they recorded about 7 years ago. â€œItâ€™s time to chose what side youâ€™re on, the side of the people or the side of the gun!â€Â â€â€œ actually I can see this being a popular live track, so disregard any of the negative points above.

Hahahaha, I approve of the song title (which sounds like a phrase Steven Seagal would utter before he introduces you to Mr. Fist) and of The Blackoutâ€™s dual-vocal, hardcore onslaught. Splitting both melodic and harsh screaming between the two singers is nothing inherently new, but itâ€™s a technique that works, especially on a track so full of body and pumped up energy as this one â€â€œ a winner in my book.

Placebo – Battle For The Sun

Dear Mr Moloko, whilst listening to ‘Battle For The Sunâ€™ I couldnâ€™t help but notice how annoying you sound repeating the last word of each sentence over and over. This is also the first time Iâ€™ve listened to Placebo in ages and ‘Nancy Boyâ€™ was really good. Thisâ€ isnâ€™t bad and the chorus sounds decent, what with the slight string parts I can just about hear, and the â€œdream brotherâ€Â¦my killerâ€ my loverâ€Â bit. Anyway, lose the crappy repeated bit at the beginning and it could be great. Warmest wishes, Ross.

CKY are still together? Blimey. Thoughts on this: ehhhhhâ€..well, it would work about 8 years ago. I see theyâ€™ve opted for some big plodding riffs and the howling vocals, and if you were drunk then Iâ€™d probably sing-a-long to this. It is however, the kind of thing that would fit on Tony Hawkâ€™s Pro Skater 27, which is by no means a bad thing.

Really, really boring until the last 25 seconds when they all started screaming â€œdo you think it fucking matters who we say we are, who we think we are and who we try to be.â€Â

Cursive – From The Hips

This is really quite stunning. Thereâ€™s kind of a Hold Steady, ramshackle-pace, accompanied by some noisy, clattering punk, leaving quite a change of tune between the tracks sombre, jazz-band-on-the-slow opening. (Yeah this makes no sense, but I know what I mean.)

Twisting down the melodic hardcore path, backed by a heavy wash of reverberation, muted strings and smatterings of electronics, Moving Mountains create a solid wall of sound and the instrumental breakdown has a certain stirring complexity about it.

Needs to be louder, so, so much louder. Or perhaps heavier? Anyway, this isnâ€™t challenging enough â€â€œ itâ€™s too standard – it’sÃ‚Â like theyâ€™ve followed some post-rock for dummies yellow book; needs rawer, gutsier riffs and the drummer needs to beat those skins until he busts straight through and his left smashing the sides to pieces with his blood-smeared hands.

Coalesce – The Plot Against My Love

Sorry Coalesce fans, but this sounds well nu-metal. The stupid distorted rapping for one thing does this no favours, but at the least the guitarist has the decency to bend his sound so it see-saws between the standard knucklehead plod, to an almost â€œmy time signatures have gone to shitâ€Â flourish.

Iâ€™m sorry, but Youves really do sound like Liars, circa ‘They Threw Usâ€.â€™ But then they also sound like a pack of dogsÃ‚Â  jumping up and down on some instruments. Whatever the case, this is some fantastic dance-punk that makes my body twitch like Michael J. Fox.

Telepgraphs – Your First Love Is Dead

One particular riff in this track is bugging me, because Iâ€™ve heard it somewhere before and I canâ€™t think where. Whatever the case, I bloody love this. It has the same giant crushing choruses of Renee Heartfeltâ€™s emo-channelling hard rock, along with some suitably tormented, yet passionate and irate cries from vocalist Darcy. Would definitely listen to more Telegraphs given the chance.

White Light Parade – Burn It Down

â€œShe hates this townâ€sheâ€™s burning it down tonightâ€Â so you date an arsonist do you? Wowzers. I donâ€™t have any real opinion on this, just Iâ€™m glad it was over really. Not offensive, just not really anything there to ‘wowâ€™ me.

I really canâ€™t put into words how bad this is. Even if Hitler, Harold Shipman and Fred West formed a band, theyâ€™d still be better than My Passion.

Ah, the band name reminds me of this classic scene from Jay and Silent Bob Strike Back:

Jay: “Whoa! What the bleep, Serpico? What’d we do?”
Cop: “We got a report of two guys hanging around outside a store selling pot.”
Jay: “We don’t smoke pot, yo.”

Brilliant. Oh yeah, I donâ€™t like this, mainly because of the rather lacklustre vocals, but itâ€™s still streets ahead of My Passion.