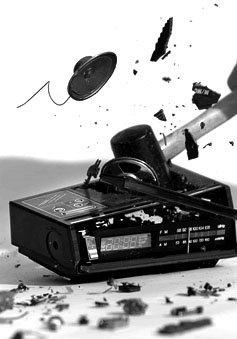 Happy New Year and what a way to start but break out the old Rock Sound CD and see what there is on the horizon for the coming 12 months in the music world. An interesting and varied selection;Ã‚Â  I only recognise about 2 bands and on the whole, most of them are worth investigating. Currently my mood is less than cheerful due to my stereo system deciding to censor my listening habits (i.e. skipping nearly all my cds or sometimes not recognising them at all.) Also, can you find a CD head cleaner anywhere? Can you bollocks – you’d have more luck going round toy shops asking for rocking-horse shit.

Don Fernando – What You Need

With a name that sounds like a wealthy kingpin who grants favours on the day of his daughterâ€™s wedding, Don Fernando plough a grubby furrow in rumbling, balls-out, meaty rock that gives nods towards Hermano and G.U. Medicine. There arenâ€™t any lyrics as such, more variations on repeating the tracks title about ‘needing somethingâ€™ – hey, not all rock has to be clever. Inevitably set to soundtrack the next Jason Statham film.

Singer sounds like a 13 year old pink and black haired slut-bomb â€œwell goffik innitâ€Â chinless stropper who has decided that spilling out all her anger and frustration in the world through the medium of slurred, Hole-esque, bass-heavy, stupid punk is a good idea. One for Jason I think.

Not sure what to say about this. Massive swinging ‘yooooooooooooooowwwwoowwwâ€™ verse-chorus transition through the guitar that they donâ€™t try and cover up in any way, which gives it that cheeky quality. Reminds me a bit of Weezer if they were heavier â€â€œ CATchy chorus (pun intended) and seems to be taking some ideas from Calories as well. Would definitely see live.

The Swellers – Fire Away

Rubbish name. Singerâ€™s obviously been listening to a lot of New Found Glory as his Jordan Pundik impression (singing through his nose) is rather tiresome. Standard emo-core stuff, absolutely nothing new; Iâ€™m also not surprised to find that Hayley Williams from Paramore champions them, because they sound EXACTLY like Paramore, only with more annoying vocals. No one wants this.

The Swellers take note: this is how you do punk you fucks. Blacklist Royals sound a bit like Rancid if they cleaned up the vocals, added more melody and a bit of organ. The Gaslight Anthem is also another obvious reference point (musically, not vocally) as ‘American Heartsâ€™ has a similar patriotic swagger. Very Epitaph records, plus, Iâ€™m already on my second listen and Iâ€™m singing along, therefore: excellent track.

Sick Puppies – So What I Lied

Had these guys down as twee indie nonsense from their name; Iâ€™m only a minute and 40 seconds in and Iâ€™m starting to wish that this sub-par, straw-grabbing, formulaic nu-metal was all about handclaps and xylophones. The only kudos this gets is when the angsty, hand-wringing lead singer starts yelling â€œLIFE! IS TOO! FUCKING! SHORT!â€Â like heâ€™s been scrambling up KoRn lyrics.

Skeletons and the Empty Pockets – Everyone Still Loves You

Now, I really like this – not just because Skeletons feature the four dudes out of thisGIRL + 1 more; but because itâ€™s a seriously brilliant tune. A jaunty, circus-style stomp, a huge jazz-hands in the air flamboyant burst of sound, Liam Creamerâ€™s tremendous vocal lead and some driving riffage – great stuff.

Sounds like Rainydayfuckparade. Oh sweet, Karl Middleton from Earthtone9 on vocals! Impressive riffs that slam down with textbook precision alongside the stocky drumbeats and this familiar, grinding drone of a particularly filthy bassline. Absolutely adore the rushed ending that should have been slightly longer.

Ah now this is something along the same lines as 65daysofstatic. Here we have the odd juxtaposition of trip-hop beats, bottoming-out, rumbling basslines that drip with malice, sporadic drum hits and some chunky, driving revs of guttural sludge. Nice spacey â€œwooohhhaaawwwooohhhaaaaâ€Â bits as well.

Maths – To Be Frozen

The Maths sound – â€œlike wiping your arse with vinegar-soaked sandpaper after 10 pints of Guiness and a curry.â€Â Itâ€™s raw, uncompromisingly vicious, with a vocalist who must spend about 8 hours everyday shouting into a storm. The feral future of noise/hardcore if Iâ€™m not much mistaken; ones definitely to watch, future Botch/*insert name of popular American hardcore band here* in the making.

Hardcore punk done in about 69 (dude!) seconds. No time for solos, chorus or any of that other bollocks. The vocalist spits lyrical sound bites at breakneck speed, spluttering and stammering over the wave of standard punk riffs, only slowing to chant the songs title like some drunken disobedient.

Some nice instrumentals now in the form of Talons, whoâ€™s heavy use of percussion and sweeping violin segments give a nod towards something you could expect sound-tracking the trailer for a BBC period drama. It then evolves into something that would be played during an eclipse or even at the event of an exploding space shuttle. Depressingly heavy, which gets Talons a big thumbs up.

Oh god, actually air-punching to this shit. Whitemare sound like Zeke, in fact, if I hadnâ€™t read their name Iâ€™d have thought â€œwow, Zeke are sounding a bit awesome nowadays!â€Â Thereâ€™s a bit of that Winnebago Deal fire present as well. I bet they all wear lumberjack shirts, drink whisky straight from the bottle and smash their instruments to bits at the end of every set. No frills crusty speed-rock, that everyone wishes they were part of. Easily the best track on the CD.

With a name like Wounds, they just had to be a hardcore band, or at least, in league with that whole noise-meets-hardcore racket thatâ€™s so popular nowadays. The singer seems to be channelling the dude from Snapcase, as do the rest of the band; as theyâ€™re jerking; dislocated sound is almost identical to the unsettling, caustic racket of the much missed New York quintet â€â€œ a harsh, scratching, ear-wrecker of the future.

Good name, (Grand Theft Auto reference?) shame about the music. When a singer has an interesting voice, this kind of plodding metalcore can sometimes be saved; but when heâ€™s just doing the same old â€œyeah, been gargling bullfrogs for about a year wwoorraaaggggggâ€Â-fest then naaa, not for me.