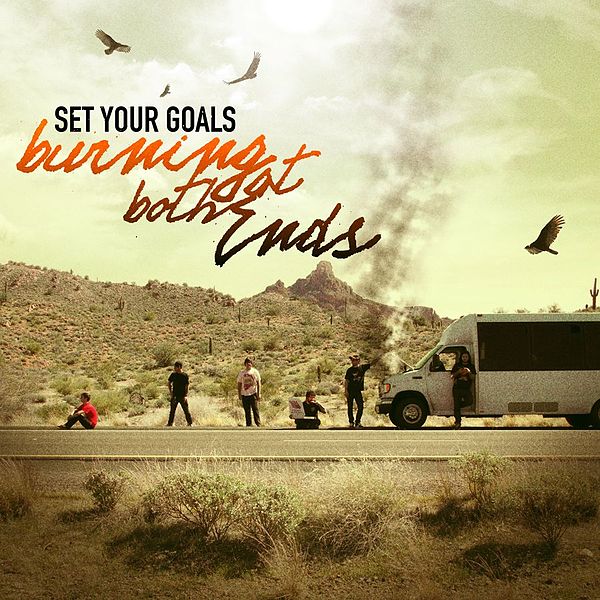 Band â€“ Set Your Goals
Album â€“ Burning At Both Ends
Label â€“ Epitaph
Release date â€“ Out now (June)
Sounds like â€“ 6 sugar-crazed maniacs jumping around after watching Back To The Future.

Iâ€™ve only heard a smattering of past Set Your Goals material â€“ what I have experienced has been decent (several tracks off of â€˜Mutinyâ€™, their second album -Â ‘This Will Be The Death OfÂ Us’Â and this excellent Jawbreaker cover) â€“ itâ€™s rapid-fire pop-punk, that doesnâ€™t stop bouncing; some nice dual vocals between the nasal-twins and it fits that template of fast hardcore with the sugary guitar chords of a radio-friendly hit.

I read somewhere that â€˜Burning At Both Endsâ€™ was a â€˜make or breakâ€™ record for Set Your Goals. Clearly, those sort of remarks are often banded about just to drum up publicity for the record, because I can imagine this is a release that they are going to want to tour the arse off of. â€˜Burning At Both Endsâ€™ is certainly a lot more poppier than past material I have experienced from the sextet. It sounds so incredibly clear and clean â€“ not a bum guitar note, no scrawling feedback; just this very crisp and polished sound. Something which can be both a gift and a curse.

Set Your Goals know how to write a killer chorus though and in pop-punk itâ€™s vital; itâ€™s the lifeblood of the song and they pretty much nail it on every track on â€˜Burning At Both Ends.â€™ Similar to Pulled Apart By Horses, Set Your Goals are heavily influenced by the 80â€™s, or at least gratuitously reference that decade to death. I mean, have you seen the video for â€˜Certainâ€™? Itâ€™s a complete glorious mess of film-montages, Michael J Fox worshipping and really dodgy looking CGI.

Opening tracks â€˜Cure For Apathyâ€™ and â€˜Start The Reactorâ€™ (an obvious nod to Total Recall) are boisterous, pogoing anthems â€“ the former, being a raucous explosion of rapid-fire pop-rock, packed with gang-vocals and bass-heavy rumbles, whilst the latter takes a more hardcore sound; crunching opening riffs that see-saw up and down, ricocheting against the dual-vocal attack.

â€˜Certainâ€™ however, is where the high mark is at â€“ and rivals The Wonder Years for pop-punk song of the year. Itâ€™s a cheeky, fresh-faced leap of barely restrained energy in around 3 minutes. The bizarre Back To The Future-inspired video, complete with the ridiculously badly animated tentacle monster, cheesy dancing and lasers blasting from the bandâ€™s instruments and eyes shows that Set Your Goals have a sense of humour and freely embrace their obvious referencing in a gloriously silly way. Also, by the time the 3rd chorus has swung round of the insanely catchy â€œand if you really want to fight with meâ€¦â€ and youâ€™re not singing it back in your best nasal tone, youâ€™ve officially no soul. It’s like the first time you heard ‘Hit Or Miss’ or anything off of the first New Found Glory album – it’s just poppy enough to hook you and reign you in, as well as being punk enough for you to bellow along to and work yourself into a frenzy over.

Thereâ€™s emotional depth on â€˜Happy New Yearâ€™, one of the heaviest and starker sounding songs present on this album. â€œIâ€™ll leave commitments pending; the worst year of my life is endingâ€¦â€ â€“ shows not only sadness, but relief in past events finally being out of sight and enthusiasm for the future being a lot brighter than the darkness that has been left behind. Itâ€™s probably one of the most mature sounding songs on the record, touching on moments of early 90’s emo, particularly in the guitars, whilst still rooted in pop sensibilities despite the dark lyrical content.

In contrast, â€˜London Heathrowâ€™ spring back to the cheery and cheeky popcore zeal, complete with superb vocal-trade offs between Matt and Jordan, almost finishing each others verses with their eagerness. â€˜The Last American Virginâ€™ shares lyrical similarities with the 1982 film it is named after â€“ boy warring for the affections of a girl who doesnâ€™t know what she really wants. The pop-hooks are once again, huge-snagging blasts of liveliness and vigorous punk melody. â€˜Exit Summerâ€™ is proper old-school hardcore-speed-pop fury â€“ fast-paced vocals that stumble over each other in their escape, air-punching choruses, brimming with passion and some nice crunching breakdowns.

Would you believe thereâ€™s actually a song called â€˜Product of the 80â€™s?â€™ Yeah. The chorus is fucking hilarious, sample:

â€œI grew up with David Lee and Tiffany, in love with Billie Jean and was terrified of Freddy. I grew up, no dvds or mp3s or plasma screen tvs because Iâ€™m a product of the 80â€™s.â€

It works though; for all itâ€™s face-palming horror, Set Your Goals nail it on a song that is the equivalent of a huge steaming lump of stilton. They even have time to throw in loads of stupid quotes from the Goonies, Saved By The Bell and other dross in the break before the last chorus. The instrumentation even sounds like itâ€™s from the 80â€™s â€“ packed withÂ weird synthesised shrieks and bleeps.

The thing is, â€˜Burning At Both Endsâ€™ is a fun album â€“ itâ€™s built to be played at parties â€“ itâ€™s the kind of record youâ€™d blast out at an American frat party â€“ hell, Set Your Goals would probably play atÂ some freshman’s collegeÂ dormÂ for a few kegs and a warm bed. Itâ€™s obvious that Set Your Goals have really enjoyed creating this album; enthusiasm and fervour sweats off of it in bucketloads â€“ essential summer listening, a cracking thirdÂ release from a band that deserve more recognition.