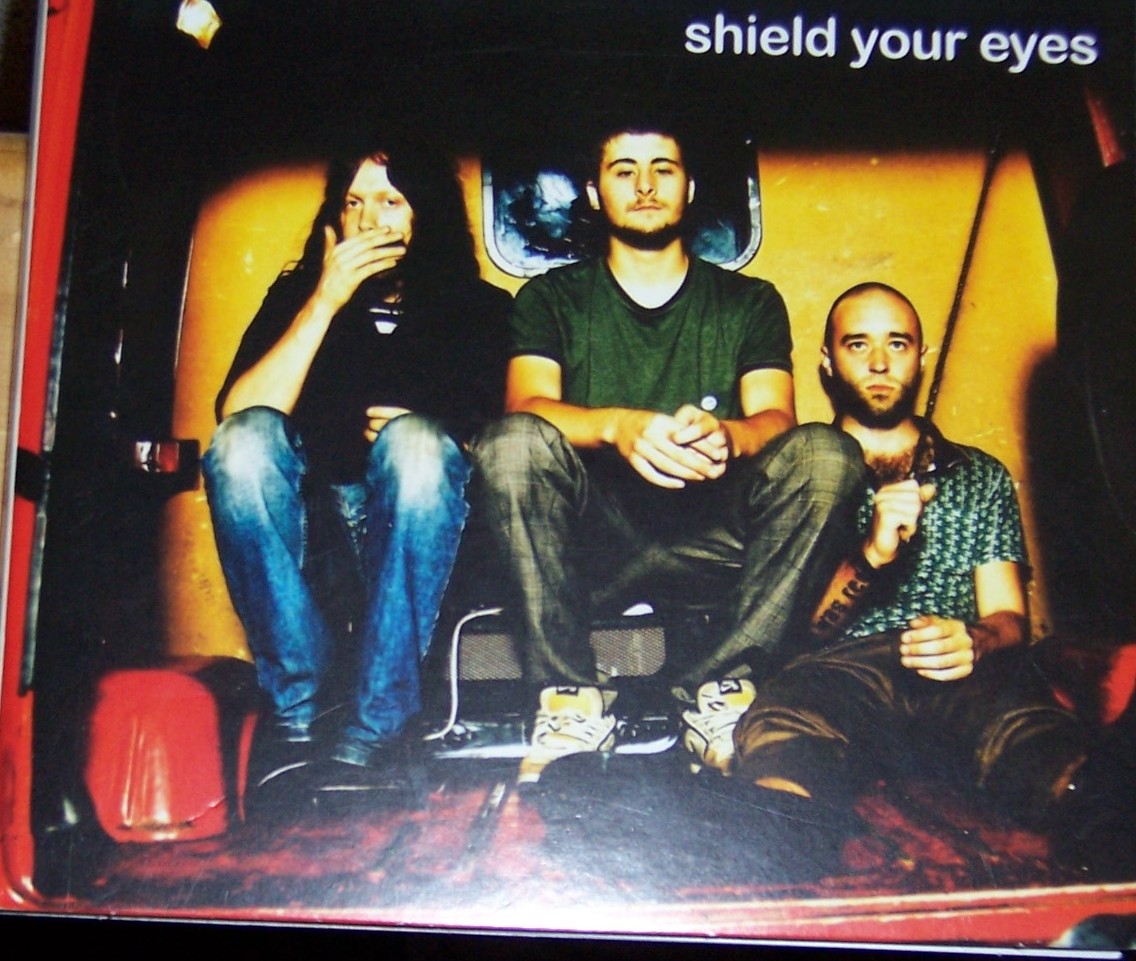 Don’t you just love it when you go along to a gig and discover a truly excellent band? This happened to me last month on a trip to The Old Blue Last, (a place that held more Nathan’s than I’ve ever seen, but had a good sound system) where I experienced the 20 minute set of Shield Your Eyes who I saw supporting Keep It Fast favourite and ‘best band ever‘ Adebisi Shank, as well as the ‘we’re not really hardcore, because we sing and have mellow bits that are really good‘ Blakfish. Whilst the latter were both excellent, it was the Shield Your Eyes boys that impressed me the most. Here’s an excerpt of their live performance from a review I was going to write, but never finished:

“The noise circulating from the small stage where three men are trashing their instruments with such furious enthusiasm is a delightful experience. Shield Your Eyes take no prisoners with their rush of tappy, stop-start jittering clatter. At times, itâ€™s as if theyâ€™re trying to deliberately sound out of tune, which only adds to the appeal of the squeals and yowls emanating from the guitarist, which are truly marvellous. Iâ€™m particularly drawn to the part where they all stopped playing and began screaming at each other, before continuing as if nothing happened. The progressive finale that died out all too soon was solid gold in terms of power and the ability to sound really screwed up yet together at the same time. Shield Your Eyes are touring in March; if you have working ears and the necessary transport to make it to the venues they are playing, for the love of god go see them. In fact, GO. NOW.”

Shield Your Eyes’s self-titled effort echoes many of the statements made in the above description; it’s a passionate, discordant uproar that captures their live sound perfectly and bleeds a distinct rawness that scratches and pulsates at the senses. Itâ€™s hard to pinpoint their sound; it seems to waver between sounding like the effects of an electric shock, crossed with a healthy dose of scattered, punk rock and some incredibly technical guitar and rhythm work.
‘Nicola Vella Burrowsâ€™ starts with an immediate, math-rock vibe, bringing to mind the now defunct Meet Me In St. Louis that bassist Tobias Hayes used to front; but kicking it into a higher and more frustrated sounding gear, allowing the machine-gun beat of the drums to puncture through the erratic, uncontrollable squeal provided by guitarist Stef. The vocals sound as if they were recorded in a different room to the microphone; images of Stef and Toby both screaming until their faces change colour springs to mind. It suits their style though and raises questions as to whether these 9 tracks were recorded in one take in a live environment due to the roughness they seem to radiate.Ã‚Â  ‘Come On Melissa Are You A Kisserâ€™ harks back to the time when emo/post-hardcore rock wasnâ€™t watered-down bullshit, but was instead a direct from the heart, sincere, yet jarring punch to the face of emotional rage. ‘Sound The Alarmâ€™ splices quick-fire passages of shrieking sound, with gentle passages of melody, whilst ‘Engines Play Chordsâ€™ and the caustic adrenalin rush of ‘Shame It Didnâ€™t Work Outâ€™ takes disjointed, mesmerizing guitar playing to new heights along side the volley of crashing percussion provided by drummer Henri, whilst the lyrics are barked back and forth in the style of a particularly bitter playground argument.
You can hear the strain and crack on their voices during ‘Reading Right Into Words You Took No Time To Sayâ€™; something which ages the band and their sound, but works in cutting a deep and emotional chord with the listener with its somewhat shrill resonance. As does the music, which follows along a sedate, but still irregular pathway of almost This Town Needs Guns-style tappy emo.
‘Serfs at Playâ€™ charges through a progressive pathway of angry, angular punk rock that ducks and weaves like a rustic version of Oxes with a touch of the grinding prowess of Don Caballero. What you have to admire about Shield Your Eyes is their ability to create a sound that is practically unrepeatable. ‘Nasty Businessâ€™ is an example of this; half the time it sounds as if a math rock band has started playing underwater and then began to feed a speeded-up looped sample of the entire track through a cheap microphone and layered it over the top, coupled with the trademark screams and unique vocal howl.

Itâ€™s nothing short of a relentless rampage and by the time closing track ‘I Wish I Could See You Moreâ€™ hits home; it feels as if the screeching attack of all three instruments has been with you forever. The build up to the noise-filled conclusion may have been done before, but not in such a way that acts as a caterwaul of spiky rock music that shifts and grooves through various patterns of angular rhythms and stabbing guitar lines before cutting off suddenly in mid chant.

This is truly remarkable stuff; DIY to the very core, (the band released the album off their own back through their own record label) with the kind of songs and playing ability that is up their with the rumbling, space-punk rock chaos of Adebisi Shank. Absolutely vital to those that like music that makes their whole body rattle – but in a good way. You need this record and this band in your life.

Shield Your Eyes Myspace
Run For Your Life