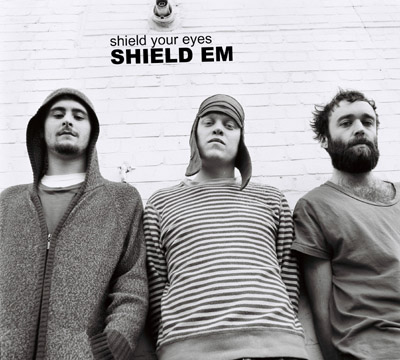 Shield Your Eyes have done the impossible – I think their sound has become even more of a ramshackle clatter. Iâ€™m intrigued to see where they go next, perhaps recording themselves playing whilst simultaneously lobbing the contents of a kitchen department down some stairs? The rattle has risen to a deafening crescendo that fans of their self-titled effort will welcome with flailing limbs and manic grins.

According to the press release, ‘Shield Emâ€™ was written whilst the band were touring their debut and took just 3 days to record. Itâ€™s described as a â€œbruised and ragged albumâ€Â -Â  a statement that would fit nicely alongside the aforementioned first bunch of recordings which made up their self-titled release. However, ‘Shield Emâ€™ feels like something thatâ€™s just won a particularly bloody fight. Itâ€™s all spitting blood, broken teeth, a shattered nose, cracked, raw knuckles but still with that unstoppable rage glinting in its 2 blacken eyes. It has a feral quality, no doubt encompassed by guitarist Stef, who seems to have elevated his playing ability to a higher plane of demented disenchanted howls of wailing vehemence. Henriâ€™s drumming meanwhile, sounds as if his kit has had ball bearings poured into it and his drumsticks replaced with a cat-o-nine-tails. Bassist Toby holds everything together with his brooding, low-end melodic strum in an effort to keep the other two in check.

‘Orangesâ€™ opens proceedings with that familiar howl of detuned exuberance. The track jangles and writhes like a slinky toppling down a very steep set of stairs, falling over itself in a desperate scramble to reach the finish line. Drum patterns roll in and out of each other, whilst the resonating hum of the shrill guitar tone cuts through the mix alongside Stefâ€™s cracked vocal lead.

Patterns are scattered like confetti on ‘Ultra Soulâ€™ which jerks and stutters with a see-sawing, mangled gait of drunken rage. The breakdown at the 1:32 mark is truly sublime, incorporating brutal, almost grind-drum beats and furiously distorted guitar rhythms. The vocals elevate to such a strained, throaty wail and are soon lost, buried beneath the roaring rush. To combat this, ‘Torn Apart At The Detailsâ€™ takes a more melodic pathway, focussing on the less ragged parts of Shield Your Eyesâ€™ sound, and taking into account the harmonic and gentle tone of Stefâ€™s voice, which whilst quite high-pitched in places, coos and purrs with elegance.

The inclusion of what I assume is a harmonica on ‘Limerickâ€™ gives the track that rustic charm of a bunch of back-porch, straw-hat and dungaree wearing yokels, decimating a variety of instruments, whilst quaffing large quantities of their own homemade scrumpy. ‘Bad Tooth Warehouse Boogieâ€™ on the other hand, is led predominantly by the bass, as the rampant guitar distortion takes a backseat (for a bit) in favour of the methodical, rhythmic bounce. The breakdown at the halfway mark keeps with the progressive build of the groove-filled 4-string and dog-like barks and yowls from Stef, who seems to have recorded his vocals inside a box thatâ€™s been thrown into a cave, whilst retuning his guitar using a sledgehammer. Quite possibly the best thing Shield Your Eyes have ever recorded (up there with ‘Nasty Businessâ€™ from their debut) â€â€œ brilliant stuff. Underneath the madness a tune does exist â€â€œ it just fathoming out how Shield Your Eyes managed to construct one.

Songs like ‘Claire Oh Claireâ€™ throttle technical boundaries to death with its barbed rattle of unnerving, almost math rock proficiency; whereas ‘Youâ€™ve Been Served By The Serfsâ€™ staggers between borderline unlistenable noise and defiant controlled feedback-drenched hard rock. ‘Your Racing Days Are Overâ€™ juxtaposes quick-fire tappy math-punk splatters with the vocals appearing on their own as a lone desolate chant, which seem incredibly isolated from the rest of the track, due to its subdued, raw nature.

‘Shielderâ€™ focuses more on a pop direction; being perhaps the lightest and bounciest track, complete with a spirited punk rock jaunt and rapid-fire drumbeats and the jerking vocal delivery and summery guitar lines.

‘Mort Aux Oursâ€™ turns away from the mangled distortion of caterwauling guitars; opting towards the delicate, layered acoustic strumming, fast-paced spoken word vocals (in the same vein as Superman Revenge Squad) and an abrupt finish that jolts the listener out of their tranquil haze.

Closing track ‘Sandyâ€™ builds on subtle instrumentisation and bitter-sweet vocal delivery, still with the odd flourishes of scrawling enthusiasm. It then bends into a twisting ride of improvised, noise-jam that touches on elements of Oxes progressive build of sound and the disconcerting drone of The Locust with crushing and exhilarating force.

‘Shield Emâ€™ by Shield Your Eyes is a warped hydra of conflicting emotions and snapping heads, content to twist one way before striking suddenly with powerful, bone shattering force, pummelling discord and some brilliant ideas and song structures.