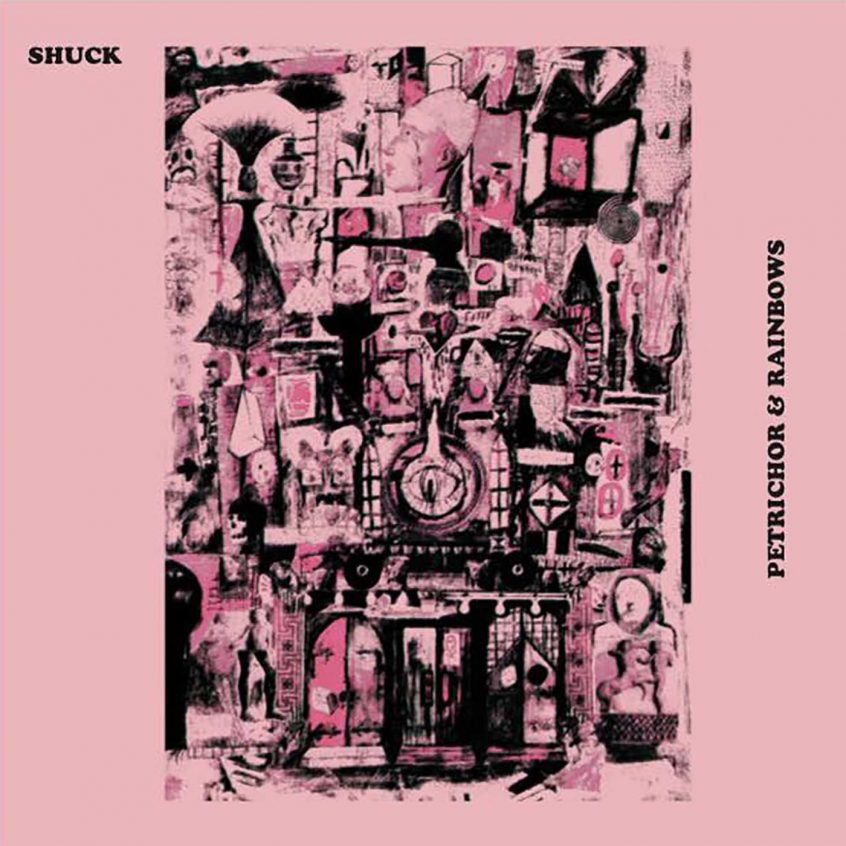 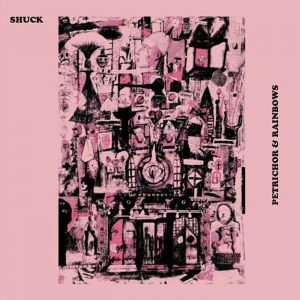 From the destructive minds of Al Wilson and Jon Perry along with Andi Jackson for the ride, Shuck, could well be the band to sit nicely in the middle of that Venn-diagram of heavy, melody and aggression. Scratch that, let’s not say nice – those familiar with the ranting, baiting noise-rock hellscape of Gnod (Perry) will find that sweating, stark and blood-shot-eyed frenzy in volumes, as those who favour the gloomy, bubbling, other-world dirge of Ghold, (Wilson) albeit given laced with this leering, Melvins-twist of vomitous punk rock bile.

Opening track, Millions, rattles past like an Indiana Jones-mine-cart; no regards for safety and very little in the way of stopping. The rumbling bass and drum clatter engulf the listener, whilst the chewing, Jehu-guitars hack and shred through the growling, almost anthemic fuzz. There are some wonderfully spiralling, noisy, disjointed riffs from Jackson, whilst the rhythmic duo of Wilson and Perry thunder onwards to oblivion. There’s a swagger to the euphoric Animals, whether it’s the almost bright-sounding guitar fuzz, the celebratory dual-vocals (“I feel just like an animal!“) or the off-kilter, gnawing bassline and just the way it will make you grin so fucking much, by being both heavy, yet laced with these huge-pop hooks, which becomes a recurring theme. The likes of Hooray, the longest track on Petrichor and Rainbows, clocking in at over 5 minutes, yet, never outstays its welcome – a meandering, slovenly track, that brings to mind the kebab-stained riffage of Chubby Thunderous Bad Kush Masters, with the joyful swagger of Red Fang at their most silly; it’s a celebratory stoner-fuzz anthem of triumph.

Get Out sounds like Torche if they were fucking stoned out of their minds for 2 minutes, whilst everyone will be air-drumming for the 30-second drum solo that opens the ridiculous Dissolve In Piss and enjoying the remaining 3 minutes, of angular, scathing, scuzz-punk immensely. After-Party honestly, sounds like the theme tune to some old 90s sitcom, it has this strange, cheerily melody and hooks embedded under all the fuzzing noise, and it’s simply delightfully infectious and really needs to be heard more – I cannot explain it, just listen to it.

There’s a really interesting moment on the penultimate track, Life After People, where the last two minutes, cut from the angular fuzz, into this trippy, tense piece of noise as though the tape has suddenly chewed itself up. Eerie, haunting whistles, laser-blasts and echoing percussion, not to mention, a swirling, hum of anticipation in the background. Dreaming/Lonely is the triumphant closer that sounds, (much like nearly all of the album) an absolute blast to perform (once it finds its stride). From the somewhat despondent refrain of “I must reject everything, always…” it builds and builds to this big, dumb rock-ending of Van Halen, arm-flailing wonder and majesty.

Criminally, not enough people will bother to investigate this, but they should, because it’s a cracking record, brimming with invention, heaviness, gnarled, angular riffs and excellent tracks that exemplify the raw power of the UK noise/sludge/hardcore underground. Rock the fuck out forever to Petrichor and Rainbows by Shuck below and chuck the good people at Hominid Sounds some cash while you’re at it.