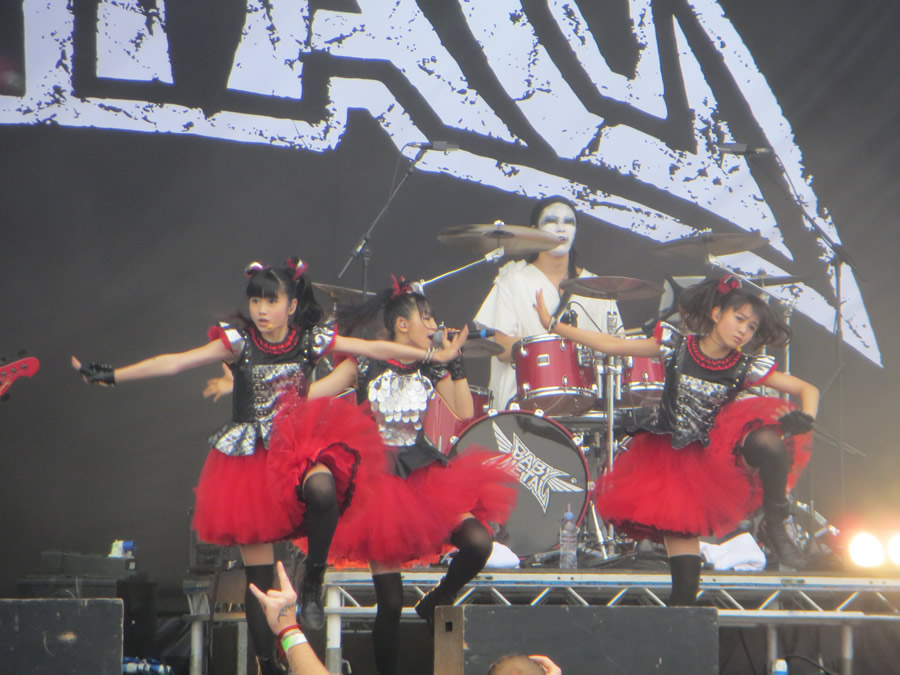 Event: Sonisphere 2014
When: Saturday
Bands: Iron Maiden, Deftones, Hundred Reasons, Black Spiders, Anthrax, THE HELL, Ghost, Chas & Dave, Babymetal
Beer: Seeing how many beers you can down in your tent listening to Will Smith’s Greatest Hits and being called Keith.
Weather:  Wet/dry/wet/dry again

Ah Saturday, what do you have in store besides loads of rain?

We’re late leaving the campsite and only briefly get a glimpse of Alestorm bringing pirate metal kicking and screaming – some dude is playing the keytar and it doesn’t sound too horrible. We’re only up early though to see one band: Babymetal. Judging by the crowd of people swarming to the Apollo stage, we aren’t the only ones. Everyone and their dog is here to witness something extraordinary. Opening with a Star Wars-aping video message about the ‘Metal Master’ and the choosing of three girls by the ‘fox god’, people are already champing at the bit. When the four guys in white robes and Wes Borland-face paint appear and start ripping into some of the most brutal and technical metal of the weekend – shit goes predictably wild. Three manga-school girls then bounce onto stage and begin a choreographed dance routine, dashing around the stage, pirouetting and throwing ridiculous shapes. It’s bedlam; looking around at the crowd and everyone is grinning, laughing in disbelief, banging their heads and throwing the ‘fox god’ horns to this bizarre spectacle. This goes on for another 30 minutes and the atmosphere is nothing short of euphoric – from the j-pop meets tech-metal ear-worm (seriously, you will never get this out of your head) bounce of Gimme Chocolate to the brutal wall of death that is summoned during Ijime, Dame, Zettai; Babymetal have won over this braying crowd of unwashed metalheads and it’s not even 1 pm. Gimmicky? Yes. Good fun? Good god, yes.

Turning attention to the Saturn stage, it’s time for Chas and Dave to run through the hits. By now, it’s belting it down with rain – perfect for a right old knees up to get the blood flowing. Sadly, the sound is lost in the wind and rain, but they bang out Gertcha, Snooker Loopy, Margate and the Sideboard Song – just as the sky begins to clear. After suffering somewhat through most of Ghost’s set (dude dressed as the Pope mumbling over what I can only describe as church-theatre-metal isn’t interesting, guys) I raced to the Jagermeister tent to witness scene-bating jokers, THE HELL shout abuse for half an hour.

They don’t disappoint – as one singer takes to the stage in an inflatable penis costume, diving immediately into the crowd. “LOWER! LOWER! LLOOOOOWWWWWEEEEEEEEEERRRRRRRRR!” roar co-frontmen NAILS and NICE GUY and we’re in flavour country. Chewing through a succession of tracks from their debut album You’re Listening to THE HELL; and a couple from their new album, Groovehammer,  this five-piece profanity train of lads thunder past in brutally chaotic and large-ham fashion. High-fives, stage dives, inflatable hammers, dicks and huge bro-core riffs tear through the Jager stage, rounded off by one of the co-frontmen being carried all the way to the back of the tent like he’s the new sweary messiah – great fun and a smashing set, you dick.

Anthrax have performed at every single Sonisphere (basically, house band now) and have already played to a packed-out tent on Friday, performing Among The Living in full. Vocalist Joey Belladonna resembles a muppet version of himself and is a maniacal, sweaty form of hair and wrinkles. Rumbling through a brief set, Indians is fucking anthemic to say the least and I Am The Law gets the crowd fist-pumping like bastards. Closing with Anti-Social is always a good way to finish, and whilst I was holding out for something John Bush-era (no Only?) Anthrax don’t disappoint. Solid.

The tent is apparently packed for Black Spiders (we’ve been in residence for the last 10 minutes, so we’re okay) and the rest of our group fail to make it inside. Credit to Black Spiders, who have built up a massive following over the last few years and it’s thoroughly well deserved. What follows is 40 minutes of loud (somewhat uncomfortably – that bass drum!) raucous, beer-can smashing, head-butting rock ‘n roll destruction. The strength of tracks from their two albums (Sons of the North and This Savage Land) is utterly pummelling – opening with St. Peter and flowing into the chord-change beauty of KISS Tried To Kill Me, this Sheffield quintet are on fire. Debauched, swaggering rock ”n roll fury rears it’s destructive and bludgeoning head. Closing with the drunken strut of Blood Of The Kings, you have to feel for those who are trapped outside – this was something special.

There’s not many frontmen like Bruce Dickinson – his unique and commanding stage presence, incredible vocal chords and flag waving skills are unmatched..

Catching only a snippet of Frank Turner, attention turns to the Saturn stage for Hundred Reasons playing Ideas Above Our Station in full. This might seem a weird prospect, but considering they were scheduled to play this in full 2 years ago, back when the festival was unfortunately cancelled, they still draw one hell of a crowd. There’s no Paul Townsend, but they attack the songs with such vicious, untamed energy, you forgot just how old this album is (12 years people, TWELVE) and it still sounds fucking incredible. You can tell that they’re having the time of their lives playing the songs that made them a household name all those years ago – from opener I’ll Find You, to the slow-burning mourn of Falter, to the punk rock of Shine, the chaotic hardcore scream of Gone Too Far and the gentle sooth of Avalanche (which holds the attention of everyone and their aching limbs) this is Hundred Reasons giving it their all. Yes, it ticks all the nostalgia boxes but at this point, several pints to the wind, all you want to hear is an album from your better years and their billing and time-slot is perfection to these ears. We’re then treated to Bruce Dickinson World War 1 dogfight before Deftones; providing some culture and history before the storm. Chino and co. are an electrifying and scraping experience live – smashing out Diamond  Eyes, Be Quiet (And Drive Far Away) and My Own Summer in quick succession; they are brutally savage, unpredictable and howling mad. Rocket Skates is a lung-splitting horror-show of death screams and raw, bleeding hate and Root and 7 Words from their debut Adrenalin are turbulent and chaotic. Uncomfortable and jarring, Deftones are an expressive, multi-headed hydra of pain, suffering, joy, warmth, cold and primal fury – outstanding.

Returning to the tent for a few beers, discussing the finer points of Will Smith’s career and being addressed as Keith by the campsite next to us, we head to Apollo for Iron Maiden. This is something I’ve waited for and wanted to experience for a while and they don’t disappoint – this is on par with the euphoria and love I had for AC/DC at Download 2010. There’s not many frontmen like Bruce Dickinson – his unique and commanding stage presence, incredible vocal chords and flag waving skills are unmatched. If he’s not scampering around the stage like a lunatic, roaring “SCREAM FOR ME KNEBWORTH!”, then he’s engaging in a plethora of costume changes (hi Danzig look!) or trolling Dave Murray (possibly) with a flag across the face. Credit to Nicko McBrain’s facial expressions; the man is an absolute joy to watch drumming and that joy is expressed with such wide-eyed delirium as he thunders his way through Maiden’s back catalogue. It’s a hits set – after all, it is the end of the three year Maiden England World Tour. It also wouldn’t be a Maiden show without the props and Eddie in various guises (Custer during Run To The Hills, recreating the Seventh Son of the Seventh Son album cover). After a fantastic encore (Carmageddon fans rejoice, they play Aces High!), The Evil That Men Do, followed by Sanctuary we troop off with Always Look On The Bright Side Of Life sound-tracking the quest for more beer, dancing and merriment. Incredible scenes, Iron Maiden are my band of the festival, hands down.