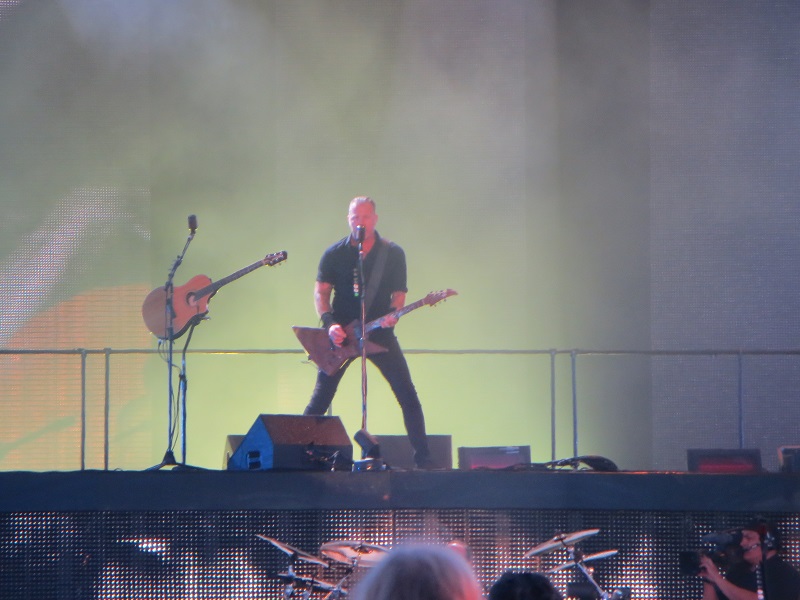 After a surprisingly wonderful night’s sleep (seven hours? Uninterrupted? I’ll take that.) thanks to a combination of being a) very drunk the night before and b) ear plugs, Sunday treated us to Cadillac Three, who are much more soothing on the eardrums; letting those far too hungover to ease into the day’s musical festivities. This Nashville three-piece sound like they’ve been soaked in whisky and their ramshackle, country-rock is crisp, drawling and infectious. Sweden’s Truckfighters are next and kick off with Mind Control from new album Universe – thrusting fuzz-rock down everyone’s throats. There’s madcap stage antics courtesy of shirtless guitarist Dango, who spends the entirety of their set running, flykicking and swinging his guitar like leatherface from the Texas Chainsaw Massacre – his feet barely touch the ground. The unrelenting wall of glorious, washed-out stoner-rock punches home, completed by tracks such as the Queens of the Stone Age-groove of The Prophet and finishing with the earworm that is the bongwater-hangover of Desert Cruiser. Main stage beckons next year lads, a cracking set, that should have drawn a bigger crowd.

We head to the Apollo stage next to watch Australia’s Airbourne, who fall somewhat flat. The enthusiasm is there, but vocalist/guitarist Joel O’Keefe won’t shut the fuck up. Whoever set up his microphone must have hit the overdrive switch, because he’s the loudest person on the planet. Unfortunately, his voice cuts right through you and it’s an irritating, grating, shrill scream that becomes unbearably nauseating. Still, they play Chewing The Fat and Running Wild and he does climb up the rigging (but only halfway) to do a guitar solo. Next time, less talk more rock please. Disappointment continues over on the Saturn stage, as Reel Big Fish are plagued by horrific sound and visual problems (screens fail to work through most of their set) as they suffer power failure during Where Have You Been? and play it through in silence, until normal service is restored with a resounding cheer. Their setlist is predictable (Beer, Sell Out, Everything Sucks) but it feels phoned-in and just dull, like really, really dull and it shouldn’t be like this at all. Spice it up guys, seriously. Also, they need to knock doing umpteen versions of S.R. on the head, because it’s a joke that’s not funny any more. Take On Me sounded good though, so stick to just covering A-ha at festivals and we’re groovy.

Back to the positives now and Mastodon make themselves heard back on Apollo and are monolithic in their awesome prowess. Opening with Oblivion, their set is a tight, 10-track blast of choice cuts from their last five albums (their first, Remission, is strangely left untouched). There’s no stage banter, hardly any acknowledgement to the crowd, they just PLAY and it’s terrific. Credit to Brann Dailor’s drumming and vocal chords on The Motherload, which is a set-highlight; how that man can sing so perfectly and hit the skins as hard and complex as he does I will never know. Black Tongue and Blastoid from 2o11’s The Hunter are absolutely thunderous and recent single High Road is welcomed by new and old Mastodon fans alike, especially the massive bearded guy in front of me, who was absolutely wrecked, but sang every single word of their set in his intoxicated delirium (whilst hugging everyone around him).

Deciding to give the Saturn stage a wide berth now (the sound is terrible for some reason); I head to Bohemia to see Ireland’s Kerbdog. A strong, amusing and loud set, this Irish mob rip into tracks from Jack Murray’s favourite album of all time, with zealous enthusiasm and the crowd is screaming back every word that emanates from Cormac Battle’s lips.  Severed being a particular highlight (“I’LL HIT YOU WITH MY CHANGE GUN!“), alongside the grunge-pop bounce of Mexican Wave and ending with rollicking versions of Sally and JJ’s Song; Kerbdog leave the stage to rapt applause, with old and new fans wishing for longer festival slots. Punk rock makes its presence with LA’s The Bronx, who swagger on to the stage and bludgeon their way through their set with their trademark speed and violence. I’m well into double figures now regarding the number of times I’ve seen them play and they still get me pumped up. Vocalist Matt Caughthran is a grinning, spinning blaze of energy, as is the rest of the band, punching through tracks from all four of their self-titled albums; Knifeman in particular, sounding like Rocket From The Crypt on the wrong drugs. Caughthran climbs into the pit during Shitty Future, proclaiming he wants to hang with the 1% crowd as much as the 99% and causes carnage in the pit, whilst being held aloft like some Norwegian sea-burial among the people. Heart Attack American closes their set in barbaric ferocity – for a track that’s just over 10 years old, it still makes the hairs on my neck stand on end. There is no revolution, just The Bronx – the beat that kills, yo.

Time to get seminal. Therapy? doing Infernal Love. Speculation about how they’re going to perform this album (The majority of the tracks are linked together with various samples) it’s soon made clear that every sound you heard on this 1995 album, you will hear in this live setting. Therapy? have previous form in the “let’s play an album in full…” as in April, they banged through all of Troublegum and associated b-sides and it was fantastic. Infernal Love is a departure from the raw, metallic punk rock of that 1994 classic and is instead a brooding, mood-swinging, vicious album of dark rock ‘n roll. Suffice to say, they don’t disappoint. From the savage, fist-punching opener that is Epilepsy to the howling, noise-rock turbulence of 30 Seconds, Therapy? are on incredible form. Personal favourites Misery (complete with machine gun and plane noises at the start) to the punk rock drum-a-thon of Loose and the ever-disturbing and sorrowful Diane all sound out of this world. With 8 minutes left, there’s time to squeeze in the ultra-sweary Potato Junkie (JAMES JOYCE IS FUCKING MY SISTER!) and the savage and ever-snarling Screamager. One of the my favourite sets of the weekend.  Follow that, Metallica.

Okay, so you can.

Metallica – a band I’ve often not seen eye-to-eye with, are on so much form it hurts. It’s a request setlist and has James Hetfield constantly reminds everyone, “they’re playing the songs, you want to FUCKING hear!” Like The Prodigy and Iron Maiden before them, all the time and effort has gone into making the Sunday headliners sound like a bomb going off – the weird strip-effects on the screens and stage backdrop are emblazoned with the four California horsemen and it’s an amazing spectacle. Battery is pummelling, leading nicely into a  roaring run-through of Master of Puppets and everyone is watching, transfixed by this mighty metallic crusade. Hetfield seems to get serious for a moment when, 6 songs in, he says “sadly I have to announce….GIMME FUEL GIMME FIRE, GIMME THAT WHICH I DESIRE, OOOOHHHHHH” as they burst into Fuel, followed by a run through of new track, Lords of Summer. A couple of well-choreographed song introductions by fans are included (one going well, the other not) – the amount of boos poor Greg gets before introducing Blackened is strange, until you realise he’s wearing sunglasses. Claiming he got burnt, he removes them (at Hetfield’s request) to show a rather shiny black eye. Everyone begins to cheer.

As the final notes of Enter Sandman ring out, I realise I am dead on my feet. The prospect of standing any more is painful. I leave the field during the encore (Whiskey In A Jar, …And Justice For All and Seek and Destroy) and head back to the tent for a much needed beer and leftover haribo. Thank you Sonisphere and all the bands that played; a most excellent and entertaining weekend!