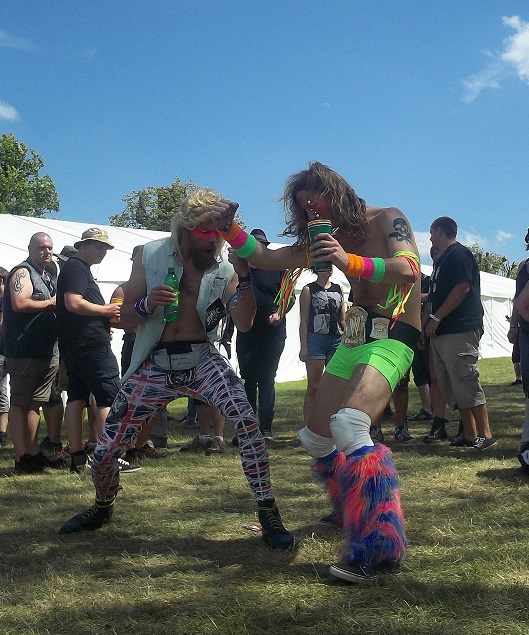 I am finally home from Sonisphere after spending what felt like an age in a car park queue topping up the tan on one of my arms. Things like hot running water and a cup of tea are taken for granted far too much when you’ve spent four days coating your body in dry shampoo, using baby wipes and eating bruised apples, washed down with warm Carlsberg.

After arriving fairly early on a Thursday morning (no queues!) we made our way in, sat down for several hours at the entrance before the gates to the campsite finally opened (sadly, not as dramatically as the can of John Smith’s that exploded on me when I stabbed my keys into the pack, accidentally piercing one of the tins). After trudging up a hill, we set up camp near three trees and a crypt and after a nightmare session of putting up the big tent, we were all set. Several drinks, some rock from the festival jukebox, followed by two hours of frantic dancing at the silent disco finished us all off.

Waking up uncomfortably early on a Friday, to the sound of Clutch’s The Regulator and the announcement from someone camped next to us that he’d “gone for a massive shit at 4 in the morning and it was great!” We visited Motley Brew for a cuppa, then began planning the rest of the day thanks to Captain Clashfinder.

First on the agenda were Hounds in the Bohemia tent, blasting out their Prodigy-inspired punk rock racket. Dressed like Andrew W.K. extras, they put on a solid performance of horror-rock, laden in squashing synthesisers and even slip in a Ministry cover (Stigmata) for good measure. It’s soon time to slog across the field (already a graveyard of Turborg cups and chip trays) to watch The Defiled.  Dressed like Edward Scissorhands meets Mad Max, they blast out a barrage of industrial metal that is over-the-top; flailing with macabre theatrics and is welcomed by an impressive, braying crowd.

Opening with Breathe and finishing an epic 20 song set with Their Law, this was the kind of monstrous apocalyptic rave to end all raves – The Prodigy After a tip off about a band, we headed to the Satellite stage to see Love Zombies in action. Their mix of pop-punk and Be Your Own Pet wild stage antics were a refreshing, boost of adrenalin- a top find on a Friday afternoon. We make our way back to the Apollo stage to experience the electro-god that is Gary Numan. Bristling with energy and a cheeky sneer, Numan is on fine form, strutting around the stage, whilst his unique, clipped vocals soaring over the huge synthesised slabs of raw power. Cars goes down an absolute storm, as does Are Friends Electric? An awesome, and exhilarating performance. Atari Teenage Riot are the next port of call and are absolutely swamped by juggernaut bass blasts, which make their set one huge pounding wall of unrecognisable mush and tinnitus-inducing chaos. It’s a terrifying, punishing and brutal set. Still, one little kid is in his element, sitting on the shoulders of a parent, wearing industrial headphones and air-punching throughout. Special mention must go to ATR for not dropping the beat during the massive circle pit that some meatheads started to form – amazing work, loudest band of the weekend fo’ sure.

With no DJ Lethal (he’s left again) how are Limp Bizkit supposed to ‘bring it on?’  Quite easily it seems. Whilst some might detest the Jacksonville mob and their crude, meat-head jock party rock,  as a festival band, I genuinely cannot think of another act that is guaranteed to get the crowd more pumped up before the headline act. Opening with an explosive rendition of Rollin’ and then smashing straight into Faith – the Bizkit boys already have everyone’s attention.

Fred Durst, sporting a rather fetching beard, throws his all into his frontman duties as he and the rest of the band play through a predictable but spirited set. Guitarist Wes Borland resembles a character from Pan’s Labyrinth meets Hellraiser, chucking out the meaty, nu-metal riffs and they even throw in a cheeky cover of Killing In The Name which sounds bloody brilliant. They run over time to squeeze Break Stuff in (Durst even apologises to The Prodigy for this – he’s a big fan) and everyone watching goes predictably apeshit. Special mention to their stand-in samples man (DJ Skeletor), who keeps playing his iTunes library in-between tracks, letting Durst pop some quality shapes in the process.

As darkness falls, it’s soon time for The Prodigy. The Fat Of The Land was one of the very first CDs I ever bought, all the way back in 1997 and they’re probably one of, if not, the first band I ever really properly got into. I played that to death and I’ve still got the original album, so seeing them in a live capacity was always going to be pretty special. They didn’t disappoint – opening with Breathe and finishing an epic 20 song set with Their Law, this was the kind of monstrous apocalyptic rave to end all raves. Insane light shows; co-vocalists/hypemen Keith and Maxim Reality stalking the stage like neon-wardancers, goading the crowd, ribcage-rattling beats and some killer cuts from their somewhat modest, but superb back catalogue.

The night isn’t over – with the sound of blast-beats still ringing in my ears, I make my way to Bohemia for a late-night 65daysofstatic set. This is truly something special, as the Sheffield instrumentalists swamp my senses with their post-rock-dance-noise-sonic inferno. Their liberal use of the smoke machine and strobe-lighting turns Bohemia into a spaceship preparing for take-off.

The stop-start mesmerising glitch-rock of Prisms sounds like it’s spewed from another dimension, the tribal drum-beats of Dance Dance Dance is a pulsating aura of shivering delight and everyone goes predictably nuts during a raucous rendition of Retreat! Retreat! and they finish in a haze of spiralling, destructive feedback and ghostly fuzz with the dream-like Safe Passage. Truly a magical end to the first night – roll on Saturday.