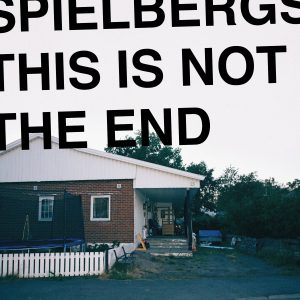 Band: Spielbergs
Album: This Is Not The End
Label: By The Time It Gets Dark
Release date: Out now
Sounds like: Joyous Beach Slang fuzz-pop with Japandroids watching very closely.

“We could be soulmates and we could stay together…”

Norway’s Spielbergs are an interesting prospect. Their debut album, This Is Not The End, is an odd beast – with its The Hotelier meets American Football album cover, it brings to mind that new-wave of alternative emo rock that doing an excellent job in being all things wonderful in the world, but also dabbles in the realms of mid-90s nostalgia and brooding shoegaze.

It’s no surprise that Distant Star, from the EP of the same name features on This Is Not The End – it’s one of those tracks that bristles with spiky, incandescent energy. It’s a warm embrace, part-love song, part wanting to embark on a journey, it touches upon leaving this planet, but being forever bonded to someone. “Now we could be perfect/you could have made me better” is the ear-worm line for the rest of the year, as is the keyboard-drenched, spirited pop-rock chorus of encompassing joy. Just as Drug Church’s “I should have started a chemical fire” was the antagonistic line of punk rock last year, “And we could be soulmates…” is the crushing hug of appreciation and fondness for 2019.

The turbulent rush of We Are All Going To Die, is a breathless, sweaty opus of carnage. The last half of the track is a weighty throwdown of crunching, pummeling guitars; it shreds with full force and is utterly cathartic and mind-blowingly brilliant. Just when you think it cannot get any louder or build anymore, Spielbergs add new layers of noise to this Japandroids-esque romp of delightful chaos. The keyboard-led fuzz of 4AM is yet another life-affirming anthem of joyful exuberance and harking back to the past, tinged with nostalgia and experience. Frontman Mads Baklien mixes those elements of hope and exhaustion, through tales of never being anxious and hitting the beach, to the wistful and melancholic chorus of needing to rest, powered on by this Beach Slang bounce.

There’s a teasing and layered attack to the sultry NFL; the drums get a full work out in the opening salvo, of Weezer-tinged hope, as it expands into this scrawling itch of post-punk theatrics. The ending is particularly satisfying as it swells into this scrappy and fizzing cacophony of crunching, agitated noise. The sunshine pop-rock of Bad Friend makes me think of Piebald at their most nerdy and earnest, with those big guitar crashes of Gameface and has this gritty, mid-90s emo-sheen, that both cuts and soothes in equal measures. It blends nicely into the 7 and a half minute ambient noise of the oddly titled McDonald’s (Please Don’t Fuck Up My Order)  is an eerie, rumbling shoegaze piece of rising noise that bubbles with trepidation. Earlier on in the album, Spielbergs touch upon a less frantic side with the brooding soothe of Familiar, complete with this twinkling keyboard sheen and a triumphant and emphatic ending of pounding drums and crashing chords.

Final track Forevermore is another slab of wistful yearning looped into this huge emo-rock chords and cascading keyboard chimes, creating this fantastic Something To Write Home About shred of fist-clenching raw power. It’s a massive closing anthem of heartfelt and multi-layered, crushing soundscapes that bridges the gaps between post-rock and emotive-alt-rock perfectly.

Spielbergs have created a debut album that burns bright – it’s full to bursting with energy and is a heartfelt ode to a scene (not sure which, but they’re striving to carve their own) and This Is Not The End is a a suitably wonderful and uplifting ride to experience.

Stream/Listen and buy This Is Not The End by Spielbergs below.

Spielbergs
Spielbergs Twitter
By The Time It Gets Dark