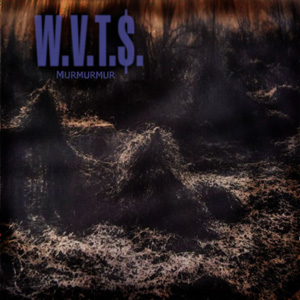 My internet isn’t working properly at the moment since the modem was moved, so my connection to the web is the same as an ADD kid playing with a light switch – sometimes he gets bored and leaves it be, other times he flicks it on and off so much I’m at the point where I headbutt my monitor.

There’s a band called We Versus The Shark, who over the course of last year, recorded and released 1 cover song each month. These tracks have been compiled together as an album called ‘Murmurmur‘ and are available as a free download from this site. As I’m kind of running out of stuff to review, I thought a track-by-track breakdown would be a good idea: plus, from what I’ve heard, it’s a damn good compilation.

1. Right Away (by Pattern is Movement)

Sitting at almost the opposite end of the scale, instead of the tremulous warbling of the original, We Versus The Shark laden heaps of scrawling feedback and unstable clatter into the mix under a solid post-punk ramble â€â€œ a cracking start.

2. The Greatest Gift (by Scratch Acid)

I like this, it sounds dirty and incredibly raw. The vocals have that scratchy, barbed quality as though the singer has just eaten a whole packet of crackers washed down with vinegar. Quite dark and sinister sounding guitar drones under a solid drumbeat and pretty faithful to the original.

I reckon Iâ€™ve only ever heard about 1 Tom Waits song. It was pretty good though. Anyway, this is the kind of track you would imagine being played over some heart-wrenching montage on an American cop show when someone important has died, or pumped through the speakers of some solitary, backwater booze-hole. A delightfully shambolic swagger of drunken exuberance.

4. See No Evil (by Television)

Christ, this has Dungeons and Dragons ‘4 stam 4 strength leather belt level 18â€™ written all over it. The word ‘NERDâ€™ sits nicely next to this is 100ft high letters of solid gold. Blatant early 90â€™s-American indie rock janglefest that I absolutely love with all my heart and the kind of track youâ€™d do that funny ‘swaying your head and shoulders back and forthâ€™ dance to if you heard it in a club. â€â€œ Ellen Page probably digs it.

5. Mow You Down Then Put You on a Pedestal (by The Matt Kurz One)

This is quite grungy. Has a nice crunching opening riff and kind of reminds me of a ‘There Is Nothing Left To Loseâ€™ Foo Fighters. Pretty straight forward rock song, with an unusual vocal slur that suits the music. I was also amazed to find out that The Matt Kurz One who originally did this song, is a one man band who plays the drums, guitar, bass and keyboard all at the same time!

6. Suddenly It’s A Folk Song (by Future of the Left)

So this is what Future of the Left would sound like minus the bile! Mad props to WVTS for this which is essentially a folk cover of a song about folk songs. Confusing? It’s hardly Back To The Future II. Shakers, handclaps, that familiar bass line, great multiple vocal spread and something that forms a picture of several people dressed as extras from the Dukes of Hazzard playing on a back porch.

This is quite bizarre. Very low-fi rock; lots of crazy wailing guitar slides and some brilliantly sloppy drumming, with a heavy use of gang-vocals all the way through, making ‘Dog Like Thisâ€™ sound like several drunk dudes shouting over a wave of badly recorded garage-punk. Excellent!

The jaunting swagger of this track is in opposition to the quite sorrowful sounding title, focusing on a slight sneering nature in the singerâ€™s quite flat, almost monotone voice over a heavy wave of slow burning rock nâ€™ roll. Nice bit of throaty wailing at the end.

9. Dummy Discards a Heart (by Deerhoof)

Trumpets! Hooray! Despite being aware of Deerhoof Iâ€™ve never heard any of their stuff. Iâ€™ll be though itâ€™s not as good as this interpretation of one of their songs though. Sounds like a ska band being pulled apart whilst they try and hold on to each other for dear life. The vocals are pretty incomprehensible, but that doesnâ€™t really matter, considering the zest and energy this track has. Itâ€™s the kind of thing youâ€™d play loudly from your car speakers as cruised around trying to pick up chicks.

After a mournful, doom-laden beginning; things donâ€™t get any more cheerful.Ã‚Â  However, despite this being a Radiohead song, it sounds pretty good. It bounces from morbid, languishing post-rock bleakness into an almost Gregorian chant in the closing minute, which is kind of spooky and a touch unsettling.

Absolutely fucking love the drumming on this â€â€œ even after the beats have subsided the sound still rings in the air. Oh yeah the rest of the song: pretty much flawless, loud, brash, post-hardcore rock with some superb grooves that rise and rise and crunch down with all the power and intensity of the original.

12. Head Over Heels (by Tears for Fears)

The original track featured in ‘Jesus Christ itâ€™s some fucko in a rabbit costumeâ€™ wacky cult film Donnie Darko in one of its many time-filling music montage scenes. Itâ€™s a decent 80â€™s tune and We Versus The Shark inject a scuzzy guitar-screeching vibe into the toned-down electronics theyâ€™ve sparsely, but cleverly used in conjunction. A decent end to a superb collection of covers that We Versus The Shark have truly made their own.