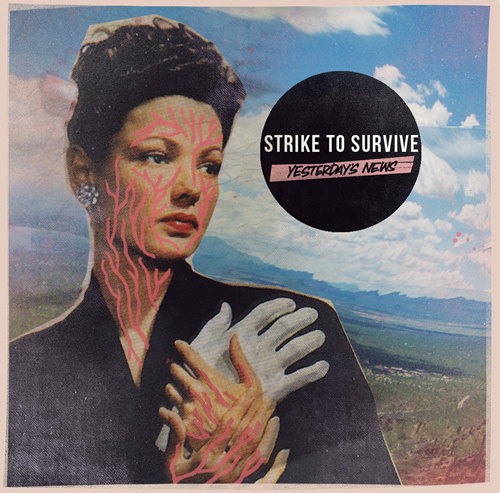 Hello I am Moz. The junior vice president – Lizardhips – has foolishly given me a login and permission to scrawl on this here site so here goes.

I play drums and like punk music but my knowledge is not nearing the temple vein throbbing, encyclopaedic proportions of your usual article author so to compensate here’s a gif explosion:

This album was given to me as my baptism of fire (not that a baptism with anything else was an option on Keep It Fast… Â cyanide?).

So I’m reviewing the debut LP fromÂ Strike to SurviveÂ who come from that California (Santa Rosa to be exact). Before I started listening the length of the songs on this album was a good sign. I like my punk songs (of any variety) like my throwing-up events: short and loud.

In some ways this band remind me ofÂ Raised Fist in the relentlessness of the vocals. But the guitar sounds are of a much more traditional punk nature, you can even hear some acoustic strings in Ringer, there isn’t the super-beefy down tuned metal distortion some bands resort to and I’m actually quite glad.Â Instead the energy of the music relies on loud bass and an effective duel guitarist attack with the classic split roles of chug and high end riffage.

A fair comparison has been made to the Bronx too, Â due to the relentless drumming and those oddly euphoric moments from guitar and vocals. Other influences cited by the guitarists are Refused, Fugazi,Â Shook OnceÂ andÂ Comeback Kid.

The drums are tight as… well a snare drum I suppose, but stay clear of sounding mechanical. Their announcement in Dead Reckoning had instant appeal and as each element entered the track, that apprehension I always feel when listening to a new album was shown the door, barred, then thrown through it arse first.

the energy of the music relies on loud bass and an effective duel guitarist attackÂ with the classic split roles of chug and high end riffage.

I normally like small bands (three piece is optimal) because they have to be more inventive to get a full sound, but in this case I think everyone focusing on their one role has made a really coherent noise, there’s no compromise on any instrument so that someone can sing for instance (although there is the occasional group shout).

Not really said much about the vocals. They are pitched nicely between a scream and a shout, very listenable and never lacking in energy. They allow the album to come over as aggressive without being overbearing. When I checked out the lyrics they were abstract and there wasn’t the clear political message you get from Refused but there seems to be a theme of looking at things and behaviours in the world and deciding they’re shit.

My recent purchases have been of a post-rock and weird pop ilk so thank you Strike to Survive for turning my attention back to the darkness (not the Darkness obviously that wouldnâ€™t make any sense).

Dead Reckoning â€“ good build-up, a proper introduction to each bit of the band and what they do.

Yesterdays news â€“ title track has got to deliver and it does with a head nodding tempo and infectious â€˜chorusâ€™ if thatâ€™s what you can call that part.

Obsidian – the longest song on the album at 3.11 has elements from other genres, with some nice changes of tempo and a cool slow bit that’s essentially an instrumental jam.