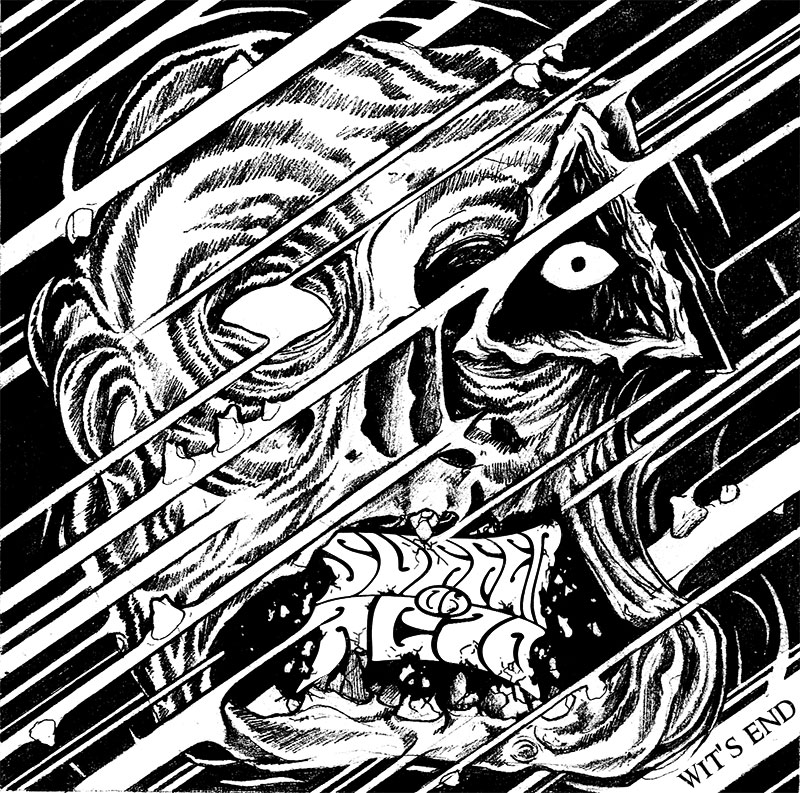 Band – Suffer On Acid
EP – Wit’s End
Label – none (looking for one though)
Release date – Summer 2013
Sounds like – powerviolence, with an emphasis on the power. Oh and especially the violence.

Being and sounding like the exact incarnation of your band name is something hardly any bands can live up to. Well not anymore! Boston three-piece Suffer On Acid sound exactly like their moniker, tripping major ball-sacks down a flight of stairs, out into the street and into the path of huge dumper-truck on fire. I mean, the artwork alone is a harrowing, vortex of twisted, White Zombie-style mind-rot of decay.

Brief and brash, Wit’s End is just under 10 minutes of demented powerviolence. Opening teeth-gnasher, Day In, Day Out sets a tone that bulldozes past with riff-after-distorted riff, barbaric drumming and Ed Gein-style vocal overlaps. A throaty “GO!” kicks off a torrent of crusty, pummelling shred that sounds like a drum kit being stamped to pieces, whilst the multi-vocal attack switches from hardcore shouts to throaty coughs of violent menace colliding at high speed. Sick World has a gruff, uncompromising swagger, complete with bellows of “IT MAKES ME FUCKING SICK!” and percussion that sounds like a storm is brewing.

Fall Together is just over 30 seconds of bass driven, rhythmic bedlam, whilst Blistered Existence is Spazz (heroes of powerviolence) in full turbo overdrive, complete with an interesting breakdown of leaden, stamping metal that shows a new dimension to Suffer On Acid’s fractured and frantic caterwaul. It never lets up though, as Knee Deep shows, which comes across as sounding like Das Oath covering Napalm Death, whilst dropping a load of cymbals on a stone floor from a great height.

Science of Justice is thrash-punk, in the same vein as Despise You, along with some impressive blast-beats and that low end fuzz of a guitar thatâ€™s well-passed tuning, but still punches a sizeable hole of rasping and crashing chords. Standoff/Endgame is a nearly unlistenable bombardment of hate-filled and repulsively heavy hardcore that lasts a brief and pulverising 44 seconds.

Disposable has that cocky, bro-core swagger and what sounds like some interesting gang-vocal guest spots and the closest Suffer On Acid get to sounding similar to a straight-up hardcore band. Behind The Eye takes notes from thrash-punk icons Some Girls, burying breakneck speed and uncomfortable reverb together in a grave of sinister, creeping noise.

Suitably antagonistic, barely listenable in places, Wit’s End is a short-sharp explosion of punishment disguised as music. Acerbic and spiteful, Suffer On Acid are having a blast – fans of Despise You, Some Girls, Spazz, Wormrot and Head Wound City should be wrapping their bleeding lug-holes around this with maximum air-punch.

Wit’s End will be out on wax this summer. You can stream the EP in full from their bandcamp below and smash stuff to pieces as you do so.