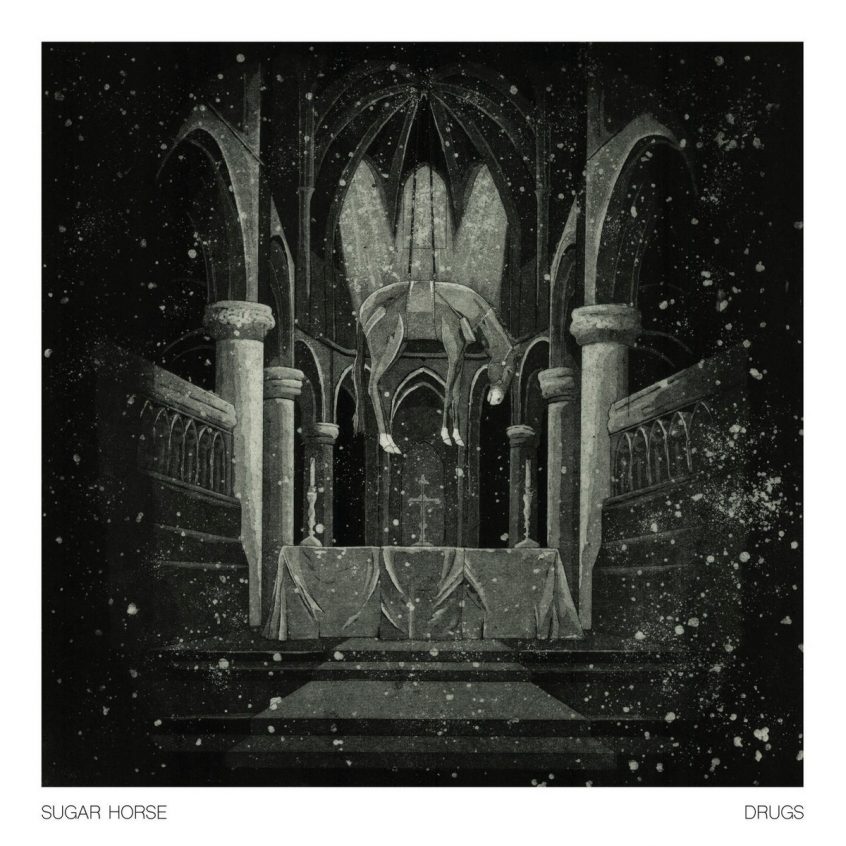 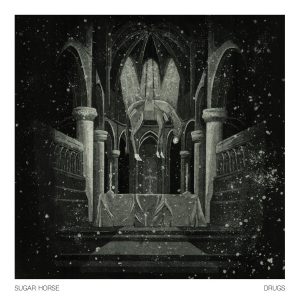 Bristol’s Sugar Horse keep cementing themselves as a best-kept secret with every new piece of music they create. Fleshed out to a four-piece, more disquiet has been siphoned into their sound since 2019’s Druj EP, meaning that Drugs is practically salivating with raw, ravenous intent. Songs on this are heavier, uglier, alienating, challenging and brutal in execution, whilst moments of genuine serenity and cradling warmth shine through the cutting gloom.

The opening track, aptly titled, Drugs, is perhaps what The Chariot would sound like if you covered them in molten tar. Credit to Sugar Horse for the sudden cut a minute and a half into this lurching, doom-laden funeral march to have some bloke called Dave read out a section from Paradise Lost, only for the band to launch, riffs first, right back into your fucking face, with brutal and bludgeoning force. The guitars crackle and spit with this, chewy, Jehu-shriek, bringing to mind the noisy, San Diego mob, whilst vocalist Ashley Tubb has a turbulent, neck-straining, hardcore roar of fiery, throat-shredding defiance. When they bring in the choir, it adds a whole different dynamic, one that is unexpected and the mood shift is so sudden, so stark it throws everything off balance and out the window. About a minute later, you can hear Tubb take a deep breath and let rip with a magnificent “YEEEEAAHHHH!!!!” which launches back into those dread-churning riffs, this unholy chant of “MAKE WAR, NOT PEACE, SWALLOW ME WHOLE…” Absolute evil, absolute power.

While the band state that Pity Party is a Minerva rip-off with “some British idiot warbling about booze over the top” (also, the same running time) it harnesses the fuzzing and empathetic warmth of Harmonicraft-era Torche, layering stoner-rock-drenched harmonies with huge, soaring pop hooks and the distorted screams of “we drank the rivers dry…” referring to booze-drenched nights out. In fact, I would go as far to say this is better than anything Torche have released in the last 8 years, it’s fucking great.

The absolute lawsuit waiting to happen in the form of the stupidly wonderfully titled Richard Branson in the Sky With Diamonds is the heady amalgamation of a glittering, sonic expanse of rich, almost shoegaze-noise that feels oddly soothing and dreamlike in execution. The waves of crystalised guitar tones hold together this warm-bath that suddenly gets scorching hot, as the raging screams, the humming, see-sawing barrage and mangled electronic hum of unease filters through. As it slowly winds down, as though the batteries of a worn-out toy start to falter, and melt into the floorboards, it kicks back in through this huge cascade of noise, bringing to mind Harvey Milk, with those bilious and blood-thirsty screams rounding everything off through a doom-soaked finish.

This leads to perhaps the most extraordinary track on Drugs in the form of When September Rain, which is simply gorgeous. Where Sugar Horse have used their bruising, twisted heaviness to make an impact (more on that on the next and final track) with When September Rain, the soothing, ethereal dynamics do that just as well, perhaps, even better, considering what they’ve followed on the previous 3 slabs of post-metal chaos. The use of the choir again turns this into a bombastic, flamboyant piece of euphoria and it’s crushingly beautiful.

The wail of caustic feedback that heralds the arrival of the final track, DogEgg, is accompanied by the harsh screams of Tubb, who bellows himself hoarse on this mangled piece of discordant noise….to begin with. There’s still time to quiet everything down and take stock, which the band do, only to launch their guitars into each other to continue this antagonistic, scraping barrage of unholy cacophonic noise that reminds me of And You Will Know Us By The Trail of Dead finishing their set back in the 2000s, instruments in bits, debris everywhere, blood on their hands, everyone and everything suddenly on fire.

The verdict? Drugs by Sugar Horse is a fantastic EP, it’s dynamic, inventive, chaotic and totally venting with rage and beauty in equal measure. What’s amazing is this is only their second EP and the aggression, depth and layers on display are sonically devastating, intimidating and vital in these troubled times.

“Where the sky meets the earth, trade it all for what it’s worth.”