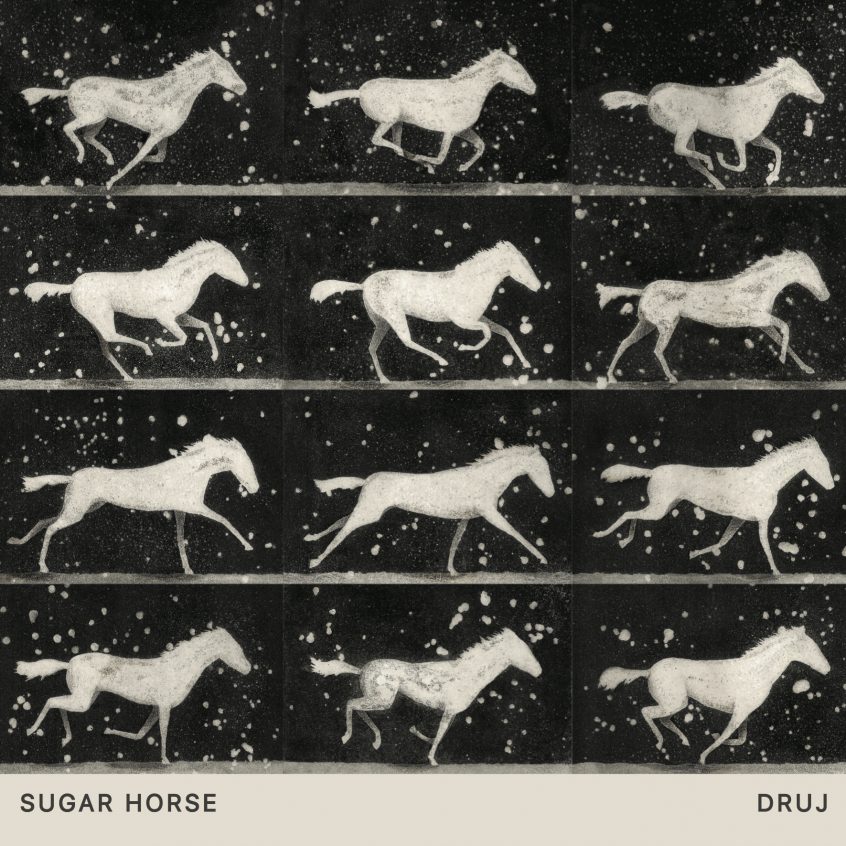 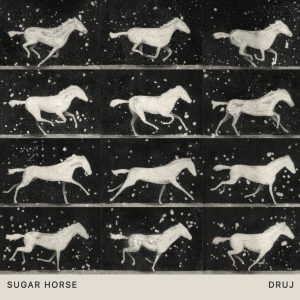 Describing themselves as a “decidedly average band” and everyone being the bassist from Iron Maiden, it’s fair to say obnoxious Birthday-ruiners, Sugar Horse, share a similar cynical sense of humour as best mates The St. Pierre Snake Invasion and Future of the Left. Ah, I’ve got your attention now.

I mean, we have a clear winner for song titles for the year with two of the tracks on this. Pack up and go home everyone else – you might as well follow the Austerity Program or Karma to Burn‘s method of naming songs, because you’re going to sweat blood to even come within sniffing distance of being as good as what’s on Druj.

Comedy song titles aside, it’s what Sugar Horse deliver sonically that sets them apart from a lot of other bands and really makes you have a Sam Niell/Laura Dern “holy-shit-I’ve-seen-some-dinosaurs” moment. Okay, not THAT extreme, but you get the idea. When opening track The Crime Song, drifts into view, the sound it makes is a Godzilla-sized footprint of smashing destruction after the shuddering drum intro. When that guitar hits, it’s not so much played as left to hang in the air like a bellowing roar of defiance. The calming vocals wash by and are quite a jarring experience, that are then buried beneath this swirling bout of snarling noise. The levels of menace on this crash straight into the red zone – the guitars jerk and squeal with spiky, jagged discomfort as it grumbles and bubbles towards this bone-crunching conclusion.

Your Degree Is Worthless And Your Parents Aren’t Proud Of You is a fucking confusing track and also the best thing I’ve heard all year. It feels like two songs in one, yet both parts fit seamlessly together in all their horror and beauty. The first part is instructions about reporting your own death, whilst the second half is an almost celebration of rebirth with the line “start over again” to counteract the “tell your friends/tell them your dead“. In fact, the whole thing makes me think of a Jam sketch more than anything else, like some kind of weird, Chris Morris skit with added images of Satan chucked in. I’ve definitely watched the video too much – it’s causing strange visions that I don’t want to see again.

The chilling fury of I Liked You Better Before You Went To Art School sets the bar ablaze with it’s scraping and caustic dynamics. Fully utilising this claustrophobic feeling, the wash of heavy and expansive noise keeps piling up, like dirt being shovelled into a grave at an ever increasing speed. It cries out with tortured emotion, which is smothered by this absolute force of swampy, monolithic, Harvey Milk-esque grudge-bearing fear.

There’s genuine hiding under the table terror when the 8 and a half minute title track swings its mighty tentacled face into view. Dear fucking god, this brings absolute carnage to proceedings; the riffs are brutal, a clawing scramble of low-end noise that never seems to end and tense, elongated passages of near silence, that suddenly jump-scare you back into the chaos realm. The howling discordant bass and guitar and the seething, bile-spitting lyrics, which are deliciously horrible and macabre (detailing how you should be loading dead bodies onto a cart, and finally, yourself) are delivered with boiling hatred. It’s all summed up in the closing rant below, which is spat over this barrage of squealing electronics and implacable, relentless riffs which utterly immerse, consume and distort everything around you.

“They said we’d always be grinding our teeth on the sticks and stones that you piss, but the only thing that’s less important to me is the rattle and hum of your hiss.”

If Sugar Horse turn out to not be your new favourite band on the strength of Druj, then you’re obviously a massively terrible person. Seriously, this is the best thing I’ve heard this year; a bleak, destructive, noisy maelstrom of warped buzzing turbulence.

You can purchase Druj by Sugar Horse on memory stick (nu-retro), wav. or with a t-shirt and a tote and that kind of shit from Invisible Lama.

Sugar Horse’s other EP, Drek, is available on their bandcamp.