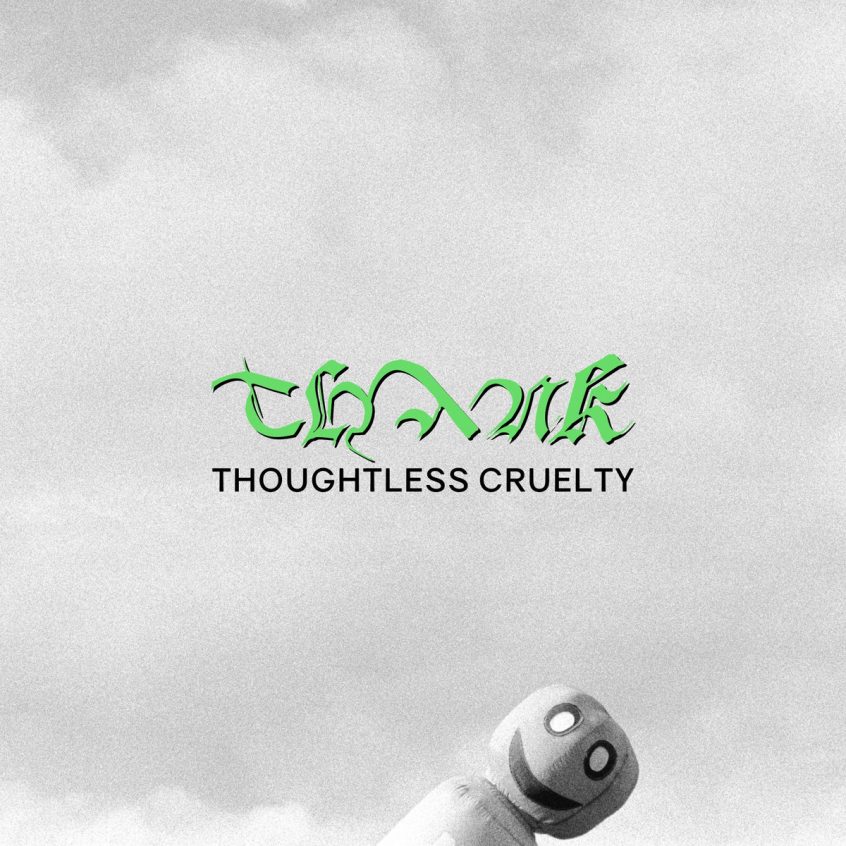 “You know there’s never been a good band from London.”

Prepare to step into the portal of weird, your hosts, a band from Leeds, called Thank, who make sounds that don’t fit but you will want to know more.

I first experienced the awesome power of Thank via Sexghost Hellscape in 2017, a delirious horror-show of an EP and one I embraced due to the noisy, antagonistic and erratic bedlam that was presented. After another EP and split with Blom, a compilation album of their work to date, we have their first, full-length debut in the form of Thoughtless Cruelty, which continues the theme of uncertainty, abstract horror and malevolent humour.

Opening track, From Heaven, feels like something breaking out of a shell, the see-saw guitars, distorted voices, punishing percussion, which sounds like 5 different drummers all playing at alternative speeds and time signatures, creating a confusing, powerful and uneasy start.

On Good Boy, vocalist Freddie Vinehill-Cliffe sounds anything like the title he proclaims as the track progresses through this bizarro-mire of pounding synthesisers and bass, culminating in the almost inhuman chant of “A GOOD BOY! A GOOD BOY!” which begins to distort, degrade and disintegrate apart from any notion of decency. Think Death Grips having some kind of breakdown.

Only one track from their past makes an appearance on Thoughtless Cruelty, a re-recorded and slim-downed version of Punching Bag, from the face-melting, Sexghost Hellscape EP. 2022’s re-work of Punching Bag removes the 2-minute howling, sci-fi bending keyboard intro of the original, and instead, goes straight for the jugular, with a burst of scrawling, ugly, guitar, amping up the sinister synth lines and Vinehill-Cliffe sounding even more unhinged, raucous, showcasing his frustration with barely contained rage.

Paris Syndrome seems to be the short tale of a failed penpal exchange fed through a mincer, all dislocated synths, tortured bass thumps and shedloads of fist-clenching frustration and malice. The best and comfortably my favourite track is the hilarious, Dread, which tells the tale of dubious renting practices, coming across like an episode of Stath Lets Flats if written by Chris Morris and the brilliant chant of “there’s never been a good band from London” which will set up shop in your brain and never leave. The discordant squealing saxophone only adds to the chaos, making this portal into houses that definitely don’t contain ghosts and shit bands from any city beginning with ‘L’ a bizarre and wonderful slab of anarchic noise rock excellence.

“All the worst people you know are now friends with each other” is a wonderfully macabre and anti-positive poster slogan (it’s barely audible, but worth straining your ears for) that it should be flown past on one of those banners in the sky to remind people how awful they are. The repeated scream of “I’ll be your doormat” over the continued discordant saxophone, detuned guitar wails and fuzzed-out agitated noise rock, only makes A Social Contract another standout track on Thoughtless Cruelty.

Religion is a concurrent theme on offer, notably on the squishy sounding Plausible Deniability, thanks to the line “And I will face God as I walk backwards into hell” which is absolutely glorious. The closing track, the marching and inevitable stagger that is No Funeral is laced with trepidation, a weird gurgling sound and twinkling keys (possibly a xylophone) that really shouldn’t work, but add so much depth to the creeping unease presented by the sludgy, growling bass. There’s nothing depressing or dour here though, it’s all laced in biting good humour (“who put the ‘jerk’ in tearjerker?“) and the refrain:
“On the day that I die, when they bury me/I want the worms all to know I wasn’t lazy” which is quite frankly, brilliant.

It is safe to say, Thoughtless Cruelty by Thank will scratch that itch for those eagerly awaiting the next Gilla Band album, but also, there’s enough genuine oddball theatrics, humour, anxiety and fucking venting on this to make it stand out from the pack as something truly unique, something truly disturbing and something truly wonderful to experience.