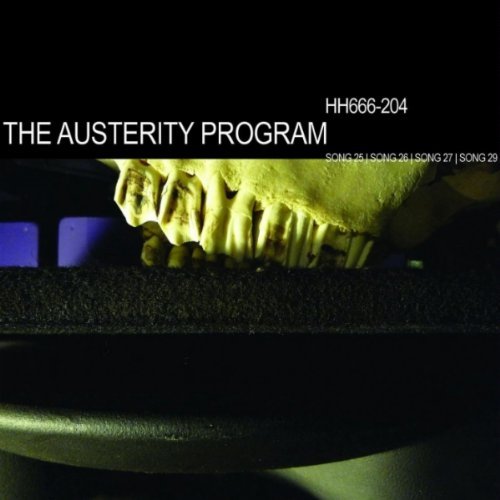 The Austerity Program is a two piece from New York, comprised of guitarist and Steve Albini-impersonator; Justin Foley, bassist Thad Calabrese and a drum machine. Sinister doesn t even begin to describe it. Desolate probably fits though, and boy is this desolate. I suppose it’s more the grim acceptance of crushing inevitability. It’s like if a bitterer, less twattish version of Rob Gordon formed a band and channelled his negative rage through a guitar and a Roland TR-808. The EP title alone gives you an accurate vision of how this is going to sound; the very fact the words Will Burn feature at the end give it a kind of righteous, almost heretical crusader vibe. Backsliders and Apostates are damned for all eternity; they will be scorched from this land and The Austerity Program are the entity to carry out this procedure.

Sorry, that got a bit preachy.

It’s incredible how you can make just one note sound so completely enraged at the world. The opening bass drone on Song 25 is that note. It’s the kind of whine that makes you constantly check to see if anyone is following you; if you did lock the door properly. Yeah, so menacing is one way of putting it. Justin Foley s trembling breathing at the start gives the impression that he’s the one escaping something. You can almost imagine him arriving at the studio, out of breath, checking to see if what was following him is still there, before opening his mouth to recite a succession of words, in an almost monotone, hypnotic trance. It’s a bit like the Minutemen collaborating with the Hypnotoad from Futurama. Wake up in the morning with the droning in your head recites Foley; yesterday, today and tomorrow and in the morning there is only sorrow. There’s no joy here. When that bass note gets uncomfortably loud, the agonising wait for more substance is finally fulfilled as the drums kick into life. The shuddering, ungainly gait of the track marches on; with Foley chanting words like a fanatical preacher, begging for rain. His howling words aren’t assuring of life affirming in any way. He doesn’t care for you or me there is, as he says only sorrow and when he finally decides to play his guitar, it meshes so comfortably on a track which isn’t comfortable in the slightest; creating this wail of feedback scorched terror and unwholesome dread. It’s like realising you re the red shirt as Scotty beams you, Kirk, Spock and the attractive blonde down to the planet. Only 3 of you are coming back and guess what, there’s a 100% chance it’s not going to be you.

Much like Columbo, The Austerity Program just has the one technique of course, but it shits on Quincy so what does that matter? The technique of course, is that merciless guitar tone. It sounds so bereft of life, hooked to only one feeling the feeling of crushing despair. It’s a snide sound as well. It turns its nose up at you, like you’re a piece of shit on the shoes of a deranged homeless man. Song 26 stamps forward with the familiar grinding bass build. It’s all about intimidation and this has barrels of it. You’ll know the end is upon us, backsliders and apostates, you’ll burn. You’ll burn burn! Foley shouts, his voice once again, sliding into parson mode as he judges us, all of us with his caustic tone. We are to burn, he’s not going to save us the stark twang of the bass, which is so guttural, it’s cruising for hookers, whilst the drums stab and judder like a series of ticks on the face of a Parkinson s sufferer. About halfway through, Foley begins ranting, but due to the noise; the crushing barrage of sound, his voice is lost, only coming back moments later, shouting at us to consider what is right? What is real? What is true? What is pure? What is god? I’m left with the realisation that I haven t a clue I don t have an answer and my ignorance will cost me. It’s disturbing it’s disturbing how The Austerity Program make the listener feel so utterly worthless.

Song 27 begins with a rusty, shuddering tone, complete with shifting soundscapes and distorted crackles. When the drums finally enter the play, they’re that sudden shock of crashing, mechanical fear. The vocals retain that sneer, Foley is even more disappointed in the listener, and his disdain is paramount. With anvils, raining down, my life’s a wreck he dismisses, as words are buried beneath the drumming, which is now, outstandingly loud. I’m Buzz the bunny, and I’m on TV, and I wish I could die! He yells, resentment and acrimony laced in every word. Electrocution in the dark, and I’ll be eaten by a shark, but I ain’t finished yet, no this shit ain’t over! He screams, the animosity now at a critical level. The cutting last remark of Not by a long shot is the perfect ending, as is the spite-filled post-punk racket that concludes the best song on this EP.

The beginning of Song 29 is essentially a wave of jangling chords clustered together, sounding eerily post-rock in places; something that is dispelled by the plodding drum beats, that crash through the track with militant determination. There’s a distinct noise-rock feel to Song 29; not that there was much melody to the three proceeding tracks, but this one is completely devoid of it altogether. A relentless pounding is the best way to describe it. There’s no way it will let go, until whatever it is hitting is driven into the ground or stops moving possibly both. The grinding quake of the last 2 minutes moves into a progressive territory, building on waves of intimidating guitar drone and clattering percussion, with the now desperate vocals wailing for some kind of validation in the sea of noise. The cut off is suitably apt, cancelling out the track on the cry of NOW THE SONG IS DONE and so is the EP.

Backsliders and Apostates Will Burn by The Austerity Program is a menacing, almost unapproachable torrent of sound; the focused raw anger wavers between genuine hate and dismissive nonchalance and the Shellac guitar tones and doom-filled bass rumbles are genuinely unsettling. A brilliant, if bleak EP of daunting sound.