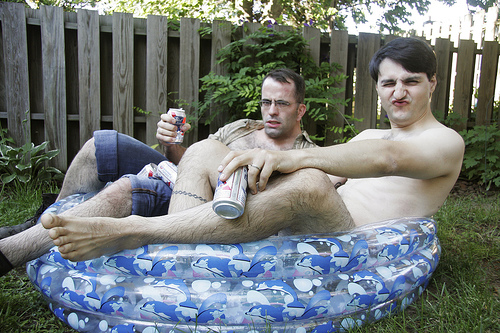 “My name is Jacob…I guess you’ve heard of me…”

This is the kind of sound that can sour milk just by being in the same room. Hell, it would probably cause the milk to turn into a fountain of tainted blood that would burst the bottle apart, spraying the poisonous liquid in every direction.

New York’s The Austerity Program are the audio equivalent of Mr Wrench and Mr Numbers sent to ‘take care of things’. Absolute evil if there ever was? Quite possibly. Beyond Calculation, the newest album from guitarist Justin Foley, bassist Thad Callabrese and a drum machine is so razor sharp, it could cut through the atmosphere leaving  a gaping, sucking, bristling tear of stinging spite. Of particular note is the barbed, hostility channelled through the sentient stickman, which is uncomfortably complex, furious and twisted in its cold, calculating attack.

This is a callous listening experience.  Like the 2010 EP, Backsliders and Apostates Will Burn, Beyond Calculation is malevolent and glowering, with a deeply disturbing grin that only gets wider and more sinister with each track. Shifting from a dark, riff-laden spiral, to a shredding punk rock snarl, to a crunching metallic scrape, The Austerity Program  show just how far they’ve progressed in the four years since Backsliders…

Opening track, Song 31 sets an eerie and desolate benchmark. A strained, elongated guitar drone is laid down beneath the pounding cymbal crashes that slowly build and build in their robotic urgency, until suddenly, they cut short. The wailing feedback subsides grudgingly as this uncomfortable and barbed instrumental piece reaches its abrupt conclusion.

The caustic, bitter bass-rumble that is Song 30 follows, teaching the listener about the life of a man named Jacob. Vocalist Justin Foley switches back and forth from himself to the fearful distorted evil that is Jacob Sinclair with schizophrenic despair, channelling boiling, hate with neck-vein-popping aggression. The clattering scythe of the drum machine only increases the caterwaul of repulsive rage, as Foley strains and bellows his lungs hoarse over this contorted, twisted punk rock racket. “YOU BEG HIM, PLEAD HIM, SCREAM UNTIL YOU BLEED” roars Foley, utterly lost in his passionate and spitting contempt and hollow, lung-gasping breaths.

Song 39 almost takes a joyful turn by being positively upbeat – a frantic pound of rapid-fire drums, minimal guitar lines and thumping bass, coupled with Foley’s quick vocal delivery. The lurching, see-sawing riffs and clattering, off-kilter drums in the last minute, alongside the cry of “there’s no time for talk and bullshit…there’s only time for goodbye”  which, are spat with such resignation and finality, you’ll start sweating, wondering where it all suddenly began to derail.

Beyond Calculation is malevolent and glowering, with a deeply disturbing grin that only gets wider and more sinister with each track..

The rising tide and sense of foreboding echoes on Song 33 – a nameless protagonist witnesses a mighty flood consume and destroy everything it touches. – “beyond all calculation…the flood is waiting” states Foley, his voice, empty and emotionless – swallowed by the waves on this near seven minute, relentless pound of desolation. This is utterly cathartic and powerful in equal measure – think End Of Radio spiralling out of control, fighting against the current and the current is made of a cymbals crashing into you every time you take a breath.

The industrial pummel of Song 32 is utterly barbaric – channelling thunderous multi-layered drum patterns, with that churning bass rumble, that almost deviates into a dance-able disco beat, before convulsing back into a militant stampede. The guitars are used sparingly, but when they bust through this rhythmic tour-de-force, they are lavish and crunching.  The pulsating synth midway through is a beckoning siren’s call, breaking up this robot-rock rampage until it reaches a super-nova climax of shuddering noise-rock, Foley howling his head off in frustration at losing his house to then fade out into the shimmering synthesized beats.

Knowing there’s no-one human tapping the sticks at the beginning of Song 35 is too fucking creepy. “Fire coming down from a hill. blood pouring down the mountain” crows Foley, his throaty shouts of pillaging and destruction soaring over this shuddering, stop-start metallic punk aggravation. Speaking of fire, the cleansing flame seems the only answer during the narrative of Song 36, as our protagonist, Carolyn, soaks everything in gasoline in an effort to erase her past. The complex and guttural blast-beat drumming and spasmodic guitar thrash, which squeals and writhes with choking pain are seething with unholy venom in the song’s burning climax.

Closer, Song 37, stretches it’s sparse-heaviness far and wide, layers of crushing crescendo raining down from the heavens. Coupled with cries of “I’m not ready to go“, the squealing, chopped-up guitar chords and mangled drum bits that are pulverising in their relentless, systematic beatdown help to create a terrifying and savage finish.

Beyond Calculation is an abrasive, turbulent record – Foley’s lyrics dredge up nightmarish visions of chaos and disruption. He spits his words with ragged malice and you know he means every damn one of them. This is a truly devastating and spectacular ride on a burning ship of complexion and cruelness and basically, perfect music for sitting in a paddling pool topless, knocking back the beers.

You can experience Beyond Calculation in a variety of formats. Visit The Austerity Program Bandcamp page, or Controlled Burn Records for more information.

“They’ll say through their poison teeth that they won’t quit..”