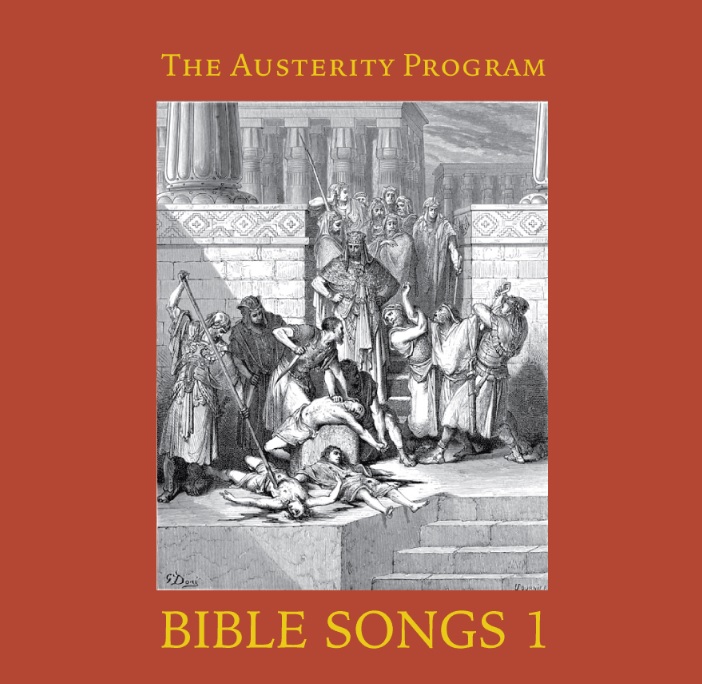 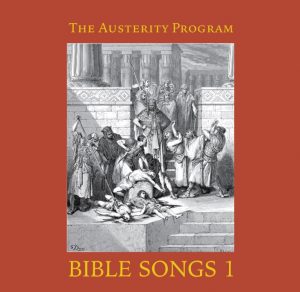 “When I put on my codpiece, mascara and assless chaps, baby you gotta know it’s pretty.”

The genuinely excellent pair of lads that make up New York’s The Austerity Program are Thad Calabrese on the sledgehammer bass and Justin Foley on a ridiculously distorted guitar, backed by the cold calculating dread of their drum machine providing all your percussive pleasure. It’s been nearly five years since the release of Beyond Calculation, an album that will leave you sobbing in a corner and at least three years since their pre-Austerity Program band, Polonium, re-released Seraphim, a dark portal of poisonous noise rock that sounds like Bolt Thrower.

Bible Songs 1 is  six tracks about the very worst bits of the Old Testament and that the “stories and voices present on this are all abhorrent.” Scanning through the lyrics and listening to the opening track of this aural onslaught, this would appear to be incredibly accurate. Are you sitting comfortably? Let’s begin.

Justin Foley’s vocals are almost consumed by the amount of sounds that are slamming into each other on this opening track. In fact, the clearest lyric is his bloody cry of “You, motherfuckers, your blood will soak the ground” whilst the rest is buried under the rapid-fire beats of the drum machine and the grinding, pummeling bass thumps of Thad Calabrese and Foley’s mangled guitar shrieks. There’s a brief moment where perhaps the automated stickman censors part of Foley’s vocals, letting out a strangled drone of machine code, showing that even the sentient being feels the trickle of dread in what’s being said. This is the soundtrack to lifting a body out of the boot of your car and dragging it to the lake for the final resting place.

Reading like a menu more than anything – talks of intestines and fats, this 2 minute blast of squealing, frantic energy rattles past with unobstructed urgency and chaotic famish, as though Calabrese and Foley cannot wait to get to the feeding frenzy. The double-bass pound of the cyberpunk machine hacks this bloody path to the table, whilst the bass guitar dredges the dark pits of your soul with this ribcage-rattling power.

There’s nothing “merry” about this. King Zedekiah has a completely shit time, losing his kingdom, his sons and finally, his eyes. Possibly the heaviest track The Austerity Program have put to tape, the inhuman savagery of those drums lays waste to everything, dredging up feelings of a destroyed and deserted city and a scattered army. Foley is apocalyptic with rage in his denouncement of the actions orchestrated in these chapters and the grinding, thrashing noise rock wave of disgust that flows forth only serves to cement this.

Interesting to note that Calabrese’s bass on this sounds as if he’s deliberately trying to re-tune mid-song, creating this trickling crackle of unwanted but tantilising noise. When the fucking drums come back in on 3:08 it’s like the end has come. The punishing, repetitive barrage is offset by the jarring, squealing guitar, not to mention the screams of the damned, Foley’s cry of “SHIT!” and roars of “MOSES? WHAT THE FUCK? WHAT THE FUCK!” which punches the needles directly into the red zone; it’s industrial-levels of heaviness, akin to that of A Place To Bury Strangers, but darker, so much darker and wicked sounding.

I swear around the mid-point in this song, The Austerity Program actually ‘break’ the track. Some clear audible sounds of switches being flicked back on and the sound of amps powering back up is heard. Vying for the top position for “nastiest track” out of the 6 on here (although it soon becomes clear they all draw in first place for that trophy), the tale of Roxanne the party girl and the consequences that unfold. The nihilistic, throbbing sounds that emanate from this boil and churn with trepidation and fearful unease.

The guitars sound like a cement mixer is driving over them, whilst a truckload of gravel rains down from the heavens. Full levels of dread are settling in now, there’s trepidation as the squealing shred reaches this almost laughing crescendo of mocking glee, but all you will feel is total despair. This is the sound of realising you’ve lost, completely and utterly. When the last line “SO IT IS DONE” is breathlessly screamed it’s time to pick up the pieces and reassess what the hell has happened.

It’s somewhat of a relief that this entire experience clocks in at around 23 minutes. Through the 6 tracks on offer, it’s a relentless, bloody and harrowing assault to the senses. The Austerity Program continue their trend of uneasy listening with this caustic and bone-crushingly heavy barrage of uncomfortable and scorched noise rock. There also seems to be only one volume to play this at, which is louder than anything else, so props to the production for being suitably meaty and ear-destroyingly dense in places. Truly masterful, disturbing and great fun in equal measures – a monument to anger and disgust.

You can experience the majestic horror of Bible Songs 1 by The Austerity Program below and pre-order the vinyl and t-shirt bundle from Controlled Burn Records. Yes.