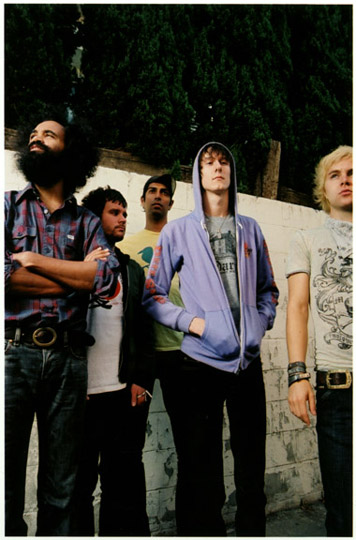 Carve out this hymn in skin!

So…good news it would seem. The Blood Brothers have decided that staying split up isn’t for them and have got back together. Yes, Seattle’s art-punk-hardcore-splatter merchants are to return; playing FYF Fest in Los Angeles, in August.

The band broke news on the 16 May with this twitter post, screaming for people to “RING OUT THE GONG AGAIN! #thebloodbrothers2014“.

This is excellent news – after having split in 2007, vocalist Johnny Whitney and guitarist Cody Votolato went on to form Jaguar Love, with J Clark of Pretty Girls Makes Graves (who then left after their first album, Take Me To The Sea). Bassist Morgan Henderson, drummer Mark Gajadhar, vocalist Jordan Blilie and guitarist Devin Welch went on to form Past Lives, releasing an EP called Strange Symmetry and an album; Tapestry of Webs in 2010.

Why should we care about The Blood Brothers returning? Well, they pretty much destroyed and reinvented punk rock in their 10 years of making music between 1997-2007  and over the course of 5 diverse, warped albums and an EP. Here’s 10 songs that you should consider essentials when exploring/discovering/re-igniting your love for this band. God Bless You, Bloodthirsty, Brothers!

This 37 second blast of blood-curdling screams, clattering percussion and lurching riffs is a scathing call to arms. “DO YOU REMEMBER US? DO YOU REMEMBER US?” roars the dual-heads of Johnny and Jordan – never, ever forget.

Set Fire To The Face On Fire (Young Machetes)

“FIYAR! FIYAR! FIYAR!” Oh come on, what else was it going to be? The opener to their last album is incandescent in burning sporadic energy and vibrancy. With a return to the more serrated, noisy guitar lines, coupled with the heavy-keyboard battering, Set Fire To The Face On Fire is one of their finest tracks ever put to tape.

Scrappy, snotty and indignant – this is early Blood Brothers before the glockenspiels, keyboards and lawnmowers. Pure, adrenalin-fuelled hardcore punk delivered with venom and spite in under 2 minutes. Older fans might find their early work a struggle, but you can hear this early snarl and foaming-at-the-mouth fury in their most recent releases.

Decidedly jaunty, Celebrator is the closest The Blood Brothers ever got to almost recording a sea-shanty. It’s basically about a party in hell – razorsharp confetti, cakes full of skulls, strippers with no legs, pinata’s stuffed with oil and sand….you get the picture. I blame what I assume is a wurlitzer piano and the swash-buckling guitar lines. I just want to join the party.

This is the reason we can’t have nice things. If a nightmare was a song,this would be it. The shifts, structure, noises and vocal effects are haunting and full-on disturbing. From the eerie-synth opening, to the scratching, scrawling guitars that sound like their chopping apart the fingers that are mangling the strings, to the cry of “MURDER=WHITE OUT!” this is true terror and it’s fucking brilliant.

Time For Tenderness (This Adultery Is Ripe)

The beginning of the transition – Time For Tenderness is the weirdness track on their debut album – the first minute and a half is howling mad hardcore, screaming of wall-fucking and skin grafts. It then takes a turn….the keyboard chimes, the descending, spiralling notes of dread, a continuous, militant drumbeat, Jordan’s harrowing, sorrowful vocal howls, that become lost in a hazing wave of distortion and static…

A stripped-back, minimal piece featuring just Jordan and Johnny at a piano, playing something that sounds like it fell off the Bugsy Malone soundtrack. It’s jaunty, immensely likeable and scattered with screams and flamboyant, large-ham theatrics. The dual gut-wrenching screams of “ONE! TWO! THREE! FOUR!” are jarring to say the least. A deranged and superb closer.

Built on an acoustic guitar, the stylistic shifts on this are just as harrowing as they are on Cecilia and the Silhouette Saloon. Whispered vocal trade-offs between Johnny and Jordan and the mulit-layered, sledgehammer of drumbeats and crunching, almost-stoner rock chords will shake you from your trance.

Sassy and strutting, this is the sound of a thrash punk band recreating a Queen song. Overdosed in camp bravado and a rainbow of colour, alongside a jarring cacophony of stuttering, spluttered chords and furious flamboyance.

Haunting and minimalistic, the title track from their 2004 album is sombre and mesmerising. Dominated mainly by the dynamic duo – they alternate between their passages of cryptic weirdness, with both singers showing off the extraordinary range to their ever-differing vocal techniques.