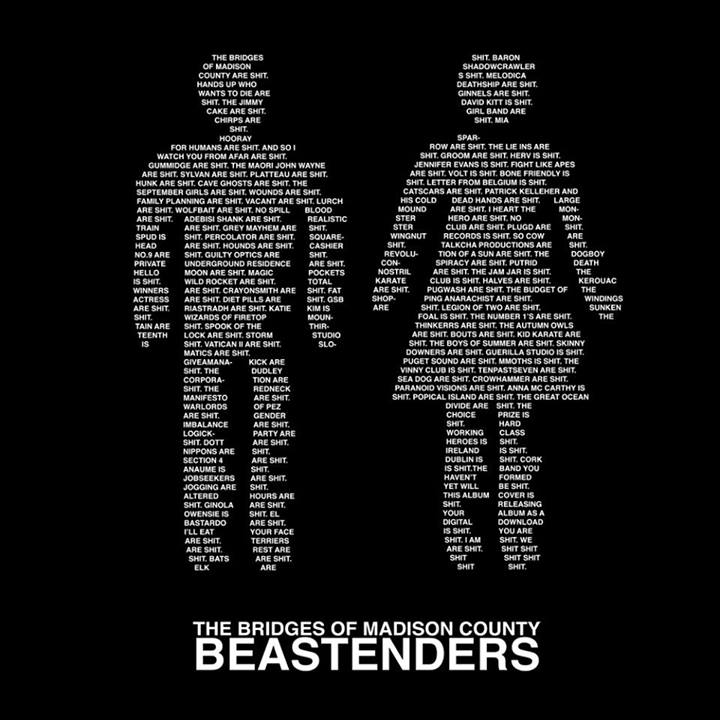 ‘Menacing’ and ‘wrong’ are just two words that spring to mind when thinking about the musical ‘works’ of The Bridges of Madison County. Featuring members from former Richter Collective (RIP) nutjobs, Hands Up Who Wants To Die, Hooray for Humans and The Jimmy Cake, this four-piece have been causing chaos around Ireland, drinking heavily, fouling sitting room floors and occasionally playing a show or two.

Formed as a possible outlet for collective weirdness, The Bridges of Madison County clearly don’t take themselves or their music seriously, which makes them even more intriguing. Beastenders is an unsettling listening experience – a mixture of maddening experimentation, taunt, yet sporadic songwriting and the grinning, cackling laughter of The Joker. Also, by weird I don’t mean ‘oh they’ve stuck some brass on it and samples, those wacky guys!’ I mean in the sense of ‘back out of the room slowly, keeping eye contact, with a false smile plastered on your face, why hasn’t someone started the car yet-OHSHITOHSHITOHSHIT-‘ THAT kind of weird.

Opening track Cthulhu Vs. Bride of Octobear, kicks things off in a deliriously uncomfortable fashion. The opening bass drone is a thick, reverberating hum of menacing energy, backed by a steady shuddering drumbeat. It gets progressively darker and more warped, reminding me of the song Stag Party from ‘out-of-print-good-luck-finding-it’ noise-rockers, Cherubs, drenched in sludge.

The trumpet is an unusual concept to shoe-horn into proceedings, but it works superbly – think a spaghetti-western if it was soundtracked by Mr Bungle. This all morphs into a tribal dance party of scrambled, overlapping vocal-chants, trumpets, clattering drums and that grinding, guttural bass surge. What time is the ritual sacrifice? Oh it’sÂ  already happening – fantastic.

Things progress down the rabbit-hole, with Mary Sweeney 2; vocal-distortions are a plenty, as is the staggering, drunken beat that struts with a scrappy, post-punk gait, with the blaring brass section engulfing everything in a wall of parping glory. Imagine listening to a Mclusky b-side underwater, with an Oompah-band trying to muscle its way in.

Things go at a more sedate pace on fourth track, Kate Bush Under 16’s Trophy For Girls – echoing female vocals, spliced with monotone male-lead over a hazing, methodical build of post-rock textures that conclude with the rambled anguished cries of a madman. Mary Sweeney 2 continues on this pathway; more spoken word vocals and the experimental grind of a hailstorm of instruments mangled together over the barely human screams and feral roars.

Eggs of the Contemptasaurus Rex – is part Dillinger Escape Plan jamming with Metz – dredging bass builds, that ache with the weight of the punishingly heavy distortion, whilst the trumpet is a harrowing last-post-style curtain call.

When the building monolith of scrawling guitars and tense, cacophonous feedback of closer, 7A, burns out, you’ll want to skip Beastenders back to the start for repeated listens just in case you imagined the whole thing. The Bridges of Madison County have created a unique and perplexing album of brilliantly dark, ominous sounds that I bet are an absolute blast on the live circuit.

Make sure to check out their EP, The Divil Wears Prada as well.

Also, props to the album cover, which features two figures made out of a list of things that are ‘shit’ with Bridges at the very top – YES!