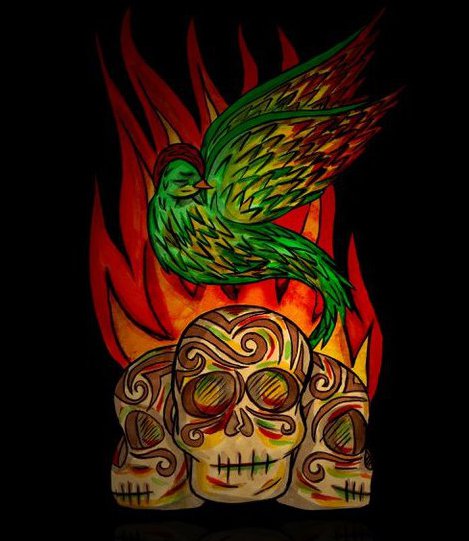 Itâ€™s somewhat of an anomaly to find a band still playing punk rock with ska upstrokes. Back in 2001 to 2005 you couldnâ€™t move for the amount of bands straining for a place on an already too-full line-up at your local music venue. Now, itâ€™s like thereâ€™s been some toxic plague that has eradicated any band that thinks the phrase â€œpick it up, yo.â€ Props though to The Casket Hecklers, who appear to be resurrecting a fallen genre, or at least, breathing some fresh life into it. Formed from the ashes of about a million of other punk and hard rock bands (Punktuation, Press to Continue, Pretty Little Mutiny, skycolouredperfect, chaos baby, The Ghost House and probably Iced Earth); guitarist and frontman Joey Mutiny teamed up with bassist Roo Hyuga and drummer Ryan Cowie to create The Casket Hecklers. The aptly named â€˜Phoenix Risingâ€™; their debut mini-album, is the kind of release that harks back to the dingy, underground basement shows, gaffer-taped guitars, mohawks that touch the ceiling and an attitude that comprises of a middle finger. Limited to 300 (all hand-numbered by Joey), this CD-R release, complete with brightly coloured inlay sleeve (as well as superb cover art, designed by Holly Knowles) feels incredibly personal and at the same time, incredibly punk.

Opening track â€˜Home Truthsâ€™ has a Capdown-vibe, circa their debut â€˜Civil Disobedientsâ€™ â€“ whether itâ€™s the bouncing ska beat, or frontman Joey Mutiny, dipping into that same rapid-fire vocal technique, Iâ€™m not sure. â€œIt really beggars belief, youâ€™re an oxygen thief!â€ slurs Mutiny, emphasising deep seated resentment and disparagement in a song thatâ€™s obviously the musical equivalent of a man, pointing and laughing, possibly at you.

â€˜Man Downâ€™ kind of staggers between Leftover Crack-skacore pick ups, with a quite melodic punk rock chorus, and a distorted, aggressive break of static and warped shouts, whilst ‘Severence‘ is pure street-punk aggression, complete with rousing “Oi Oi’s!” and some rather caustic banter. Perhaps the lightest track on the album is â€˜Fires Withinâ€™, which bounces with such gleeful exuberance, itâ€™s hard not to be warmed. The dual vocals and choppy beats, not to mention when it kicks up a gear means it has all the elements of something that mixes The Filaments with Captain Everything, but with an even snottier attitude â€“ one that is more likely to give you a hug than punch you in the face.

â€˜Skank The Plankâ€™ is part espionage, film noir in execution, part choppy ska upstrokes and almost dips into The Offspringâ€™s â€˜Come Out And Playâ€™ before the gruff pirate interlude muscles its way in. The rest of the song then rattles along like something cribbed from a Turbo A.C.â€™s record â€“ quiff-rock nâ€™ roll lip sneers and a mountain of bad attitude. This is perhaps where The Casket Hecklers are at their strongest; punchy, raucous rockabilly that you want to bang your head to.

â€˜Comeuppanceâ€™ is a juvenile, scrappy piece that doesnâ€™t so much shout revenge song, but screams it in your face with burning rage â€“ itâ€™s hardly subtle, hey, nor was â€˜Prayer To Godâ€™ by Shellac, but both get the job done I guess. â€˜Tethers Endâ€™ follows a similar pattern, but seems a lot more tongue-in-cheek, kind of following in the style of Aaron Barrett, by being both uplifting and silly musically, but being fairly downbeat lyrically. â€œYouâ€™re like an anchor around my neck to keep me drowning….youâ€™re no good for meâ€ barks Mutiny, his bitterness apparent, yet with that cheeky sneer of someone who sees the glass half full as opposed to half empty.

The slow burn of the title track, is reminiscent of closing time at your local; in fact, it reminds me so much of Sublime (especially the intro, which makes me think of ‘Santeria‘) and to another extent, the Mad Caddies, as it could quite easily slot on to their ‘Just One More’ album. As a drinking song, it checks all the right boxes – big soaring chorus you can bellow along to, a slightly melancholy, yet hopeful outlook conveyed with guts and sincerity by vocalist Mutiny, as well as mashing that Long Beach ska-sound with the scuzzy punk rock warmth of Hertfordshire.

If you are interested in getting a copy of ‘Phoenix Rising’; contact The Casket Hecklers on their Facebook page to get it at the knock down price of 2 quid. You can also download for free their cover of the Old Crow Medicine Show song, ‘Wagon Wheel’ from their Facebook or Reverbnation!