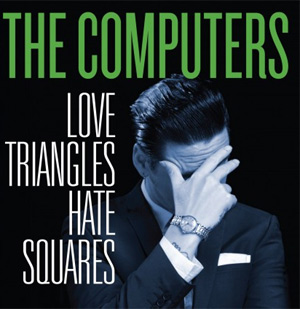 Band – The Computers
Album – Love Triangles, Hate Squares
Label – One Little Indian
Release date – Out now
Sounds like – “I guess you guys aren’t ready for that yet. But your kids are gonna love it.”

Almost every review of Love Triangles, Hate SquaresÂ  by The Computers has probably started off pointing out the differences between this and their debut, This Is The Computers. It’s glaringly obvious mind you, so there does seem reason to mention it. Gone are the screams, almostÂ whittledÂ away to nothing. Gone is the frantic shredding, with the hardcore-punk tendencies thrown from the train. Instead, hello soul – hello 60s organ-sounds – hello rock ‘n roll – hello Chuck Berry!

Far from a criticism; Love Triangles, Hate Squares is the kind of old switcheroo record The Computers needed to make. Rather than being stuck in the quagmire of shouty hardcore, they’ve developed the sound that was present on their debut (I’ve Got What It Takes and Rhythm Revue for example, are both a close example of a more refined sound) into something that’s a more soul-garage punk version of Rocket From The Crypt, sans horns, playing Buddy Holly songs. It’s not so much growing up, as jumping in a Delorean, returning to Hill Valley, playing a fucking awesome guitar solo at the under the sea dance and trying to avoid getting hit on by your mum. There’s a retro-cool factor that bleeds from Love Triangles, Hate Squares – you’ll feel like wanting to dress in a suit every day; skinny ties, slicked-back hair, finger-gunning everything – looking like an indestructible badass.

The stuttering guitar of opening track Bring Me The Head of The Hipster, spills forth with a Speedo-esque “OW!” and follows a path of hip-swinging, slutty garage rock, completed by a suitably dirty-blues harmonica and scuzzy, disheveled riffs. The backing “oh-ah-oh-oh-ohs“, lend it a certain 60s-vibe, whilst the keys build in crescendo and the guitars spit a fierce, snapping fire of Little Richard-infused attitude. The title track is a stone-cold rock ‘n roll banger that is so damn infectious it should come with a health warning. Despite vocalist Alex Kershaw expressing boredom and thinking he lacks soul, Love Triangles, Hate Squares is anything but dull or lacking in life – it shakes and grooves with the slick garage strut of The Hives and a chorus that god knows how many punk rock bands would kill for. It’s also got this effortlessly cool vibe and radiates such positive energy – like what I imagine being high-fived by Henry Winkler feels like.

Recent single, Mr Saturday Night is a handclap-heavy stomp of soulful pop-rock that will have you grinning in delight, whilst Nothing To Say, is a more moody, crooner, with another absolutely killer chorus, drenched in twinkling keyboards. It’s the kind of track that melts and woos even the coldest heart; emotional in the sense of being romantic, yet never mushy or crass – it’s a real curve-ball and easily one of the best songs on this album and possibly their most accomplished song to date.

Love Triangles, Hate Squares shakes and grooves with the slick garage strut of The Hives and a chorus that god knows how many punk rock bands would kill for..

Selina Chinese is a rollicking tribute to Great Balls Of Fire. It practically vomits cousin-marrying eccentric Jerry Lee Lewis all over you – from the frantic piano-stabbing drive, to the blistering drum rolls, vocalist Alex Kershaw’s howling rapid-fire delivery and the grooves – man the grooves are so damn catchy; it absolutely thunders with garage rock precision and ardent, zealous determination, but with a great sense of demented fun and hip-shaking debonair.

The garage rock shout-a-long of Disco Sucks is the only real nod back to The Computers of old. Shrill keyboard squeals sit nicely alongside the cowbell bashing drumbeats and feedback-laced guitar screeches. It taps into the harsh-garage punk sound that punctuated their debut releases as well as the John Reis-side to their eclectic and shifting rockabilly sound. Call On You! might seem somewhat cheesy, but is so damn enjoyable – a bouncing, jaunty ditty – carried by zealous piano flourishes and Alex Kershaw’s wonderfully dapper-vocals. The rampant swagger of Sex Texts sounds like something Vince Vega and Mia Wallace would be getting down to – whilst C.R.U.E.L is a tale of broken love and a broken heart tuned to a soulful rock ballad.

After one listen, Love Triangles, Hate Squares becomes intriguing – after two, it’s delightfully infectious. At three you’ll be applying brylcreem to your hair before you understand what the hell is going on. If this is the future of UK rock ‘n roll – count me in; a fantastic and needless to say, essential record from a group who should rightfully take the crown of Your New Favourite Band.