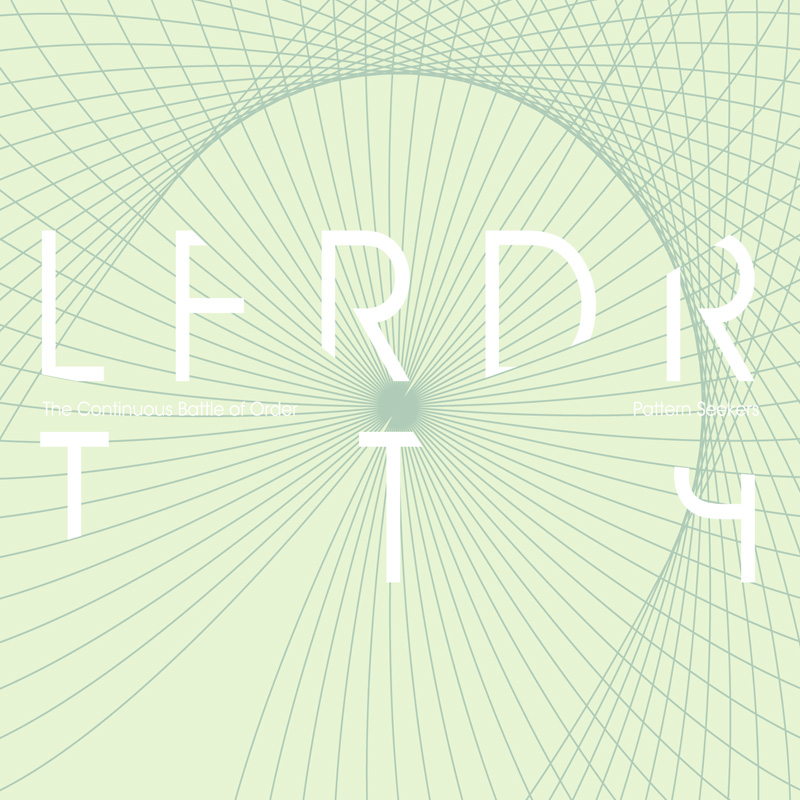 The Continuous Battle Of Order win the award for having a name that makes me think it should be the tagline to a Command & Conquer or Call Of Duty game. Heck, it would work attached to a Viva PiÃƒÂ±ata title. Comprised of just two guys; a drummer who goes by the name Craig and a guitarist by the name of Hornby, The Continuous Battle Of Order formed out of the ashes of math rock-types, We Are Knives. In some respects, they share similarities with Rhode Islandâ€™s Lightning Bolt â€â€œ the minimalist set up, songs mostly devoid of vocals and instead utilising a barrage of sound as the mouthpiece. Yet, they sound nothing like the bass-noise duo, as their sound is more in common with the buzzsaw drone and exuberant flourish of Shield Your Eyes and in small doses, label mates Adebisi Shank.

The opening track on ‘Pttrn Skrsâ€™Ã‚Â  is filled with the following: a Morse code-type distress call, glitched bleeping, the rushing of waves that bleed into lumbering drum beats and jarring, swirling out-of-tune guitar crashes that donâ€™t seem to follow any pattern, rhyme or reason. Itâ€™s captivating in a strange way; as with The Continuous Battle Of Order, itâ€™s unclear of their goal or even what the next few seconds are going to bring. Itâ€™s a bit like staring into the mind of a manical schizophrenic. These are his thoughts â€â€œ fluxing between hoarse vocal cries, tribal percussion; the de-tuned haze of a sea-fishermanâ€™s radio relaying co-ordinates, trippy passages of drugged guitar chords and mangled rhythms. It then bleeds into some impossibly fast tappy/math rock guitar scrawl that the drums battle valiantly for domination. Itâ€™s like listening to OXES played at a faster/wrong speed whilst the shipping forecast is being recited in the background. ‘Pttrn Skrsâ€™ feels incredibly raw; fresh studio jams that lack polish but instead feature that guttural nuance of scrappy discord. The guitars and irregular drum patterns stumble over each other like two ADD-sufferers trying to complete a three-legged race; particularly on ‘002â€™, which dips into Don Caballero territory for pretentious sustainable notes and ramshackle percussion. Itâ€™s held together with this grunge-edge that grooves and shifts with arrogant assurance and a rumbling bounce. ‘003-1â€™ starts with a persistent guitar twang, with a womanâ€™s voice reading various numbers like someone feedbacking the lottery result from the 1930s through a cheap transistor. ‘003-2â€™ is predominantly a stop-gap percussion piece, focusing on tribal drumming, clattering and banging with the only thing missing being a sweet glockenspiel passage.

The soothing wash of the rich guitar plucking on ‘004â€™ is a stark contrast to the somewhat unpredictable rush of sound that the previous tracks have offered; yet its mesmeric tone is captivating. The subtle fade-in and out offered by this track, not to mention the quiet strings help create a luscious piece of absorbing sound. ‘005â€™ stutters and staggers with very little control as the duo that make up TCBOO fire out quick bursts of rattled tappy-instrumental melodic rock. They pause periodically to regroup; refocus and twist the track in another direction â€â€œ by either following the same repetitious chord pattern or completely changing progression all together, diving down another pathway of busy clamour.

The last track begins with a shrill wail from a Theremin, coupled with the fuzzed vocal sample chanting the line ‘WE ARE ALL JUST PATTERN SEEKERS.â€™ ‘006â€™ is clearly the heaviest and progressively noisiest track by TCBOO; the rasping burst of the grunge-rock guitar scrawl and irregular drum strikes eventually slips nicely into some spiky, math-rock waves, whilst the unremitting drum roll is furious and encompassing. It ends abruptly with the tapping Morse code as heard at the start of the album.
Some might say that this whole experience cements the feeling that ‘Pttrn Skrsâ€™ is not an album, but merely half-an-hour of varied sounds made by a radio transmitter and an erratic disc jockey. Others, would state itâ€™s the work of two individuals who have gone beyond the realms of structure and focused on making music that excites, confuses and inspires.

The band are also playing Brixton Windmill on the 23rd May with Tweak Bird.

The Continuous Battle Of Order
The Richter Collective