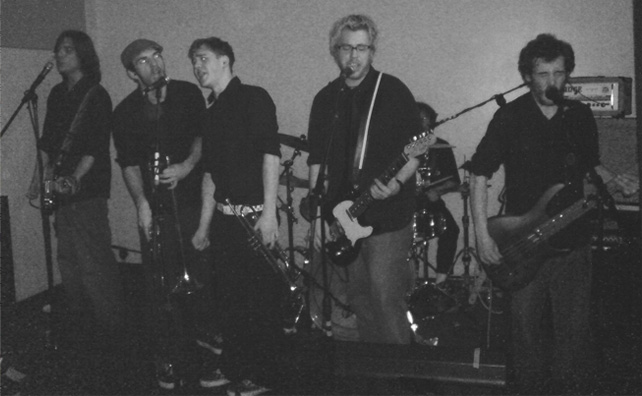 Life is full of mysteries. The Bermuda Triangle, the popularity of the TV show Friends, advocaat and why The Display Team are still unsigned. It makes my teeth ache thinking that this sextet of unpredictable chaos in musical form is being overlooked for acts that areâ€Â¦wellâ€Â¦beneath them. It may sound like a tired clichÃƒÂ©, but seriously, youâ€™ve not heard a racket like this before nor will you have seen a more entertaining and exciting performance, except perhaps another The Display Team show.

Due to train complications, i.e. nearly jumping on the wrong tube and riding around on the circle line, Keep It Fast arrives at The Good Ship as Mr Duke and the Hoodlum Circus finish.

Bugger, not a great start, which leads to a heated debate about how many bands weâ€™ve missed already and the downing of several pints. Recently someone said to me that theyâ€™d never go back to the Good Ship until they fixed the sound. They must have been on a day where a monkey was on the mixing desk then, because the levels for Jonny Cola and the A-Grades were spot on. For one thing, I could hear the bass guitar, which is something I havenâ€™t heard at a live gig in fucking ages. The A-Grades and their swaggering vocalist, Jonny Cola, are obvious naturals, hammering home track after track with precision, grace and a somewhat arrogant but cheeky swagger. Three highlights of the set include the drummers amazing headbanging; sampling part of Bonnie Tylerâ€™s ‘Holding Out For A Heroâ€™ and Jonny Colaâ€™s abrupt and extravagant need to roll around on the floor during the bandâ€™s final song. Would definitely see again.

Nothing prepared me for the rickety rollercoaster of folk-punk nonsense and hilariously cheesy 80s casio keyboard demos of Los Salvadores, who batter their ramshackle sound through The Good Ship like Babe Ruth. Their performance succeeds in etching a permanent grin on my unshaven visage, especially the antics of their hyperactive frontman, the gang-vocals during one track that make me want to punch the air and the axe-shredding skills of their mandolin player. At times it sounds like the result of The Specials and Creedence Clearwater Revival joining forces to cover NOFX songs. Anyway, terribly predictable analogies aside, Los Salvadores are a spirited and passionate bunch, who display the type of ferocity for playing live that many bands sadly lack. Excellent work. One thing you notice about The Display Team is the shear amount of joy this sextet have when playing live. You will also notice how incredibly tight all their arrangements are and yet they still have this unpredictable element of energy that threatens to break loose and whirlwind around the venue, tearing it apart, note by note. On record, the band are an entertaining and vicious bunch, crunching out their brass-fuelled, heavy rock with ease, but in a live environment, they take that sound and transform it into a flurry of twisted stop-start, brackish chaos. The immediate pounding rush of ‘Worry Spongeâ€™ starts off their exceptional set; vocal harmonies all in check, trumpet and trombone both parping like a baked bean eating champion and the kind of slick, punk rock riffs that thud home like drop pods smashing into the earth.

This relentless nature doesnâ€™t let up for the next 35 minutes or so, as they charge headlong through tracks from ‘Dronesâ€™, their debut album with such gusto and endless adrenalin. By the time youâ€™ve worked out whoâ€™s singing, someone else has jumped in to add their own shout/scream/line with such enthusiasm, you canâ€™t help but smile. The music also contains an unpredictable erratic element, switching style, tone and speed in the blink of an eye. Itâ€™s the great back and forth between the drummer and lead guitarist, who share the duty of frontman, yet no one is really pushed aside in favour of someone else. There is no leader; every member plays an integral part, whether it is the manic playing of their frenzied bassist or the vigorous pogo-jumps of the brass section.

Whilst ‘Gnaw On The Iron Pawâ€™ treads ground between Patton-style noise punk, ‘Norwegian Honeyâ€™ give nods towards Mad Caddies era-‘Rock The Plankâ€™ with itâ€™s swashbuckling stomp and vigorous energy. After several more harmony-filled barrages of vibrant and raucous rock, they finish all too soon with the elegant trumpet flourish and arguably the strongest track of the night in the form of ‘A Letter To Russiaâ€™ (a beautiful and tragic tale of Samantha Smith and Secretary Andropov). My only gripe is there should have been more, as The Display Team are a band I cofuld quite happily watch all night. The most entertaining live band in UK? Quite possibly. I strongly urge record label minions to seek out The Display Team and experience their passionate, whirlwind assault. An absolutely cracking start to my gig-going year.