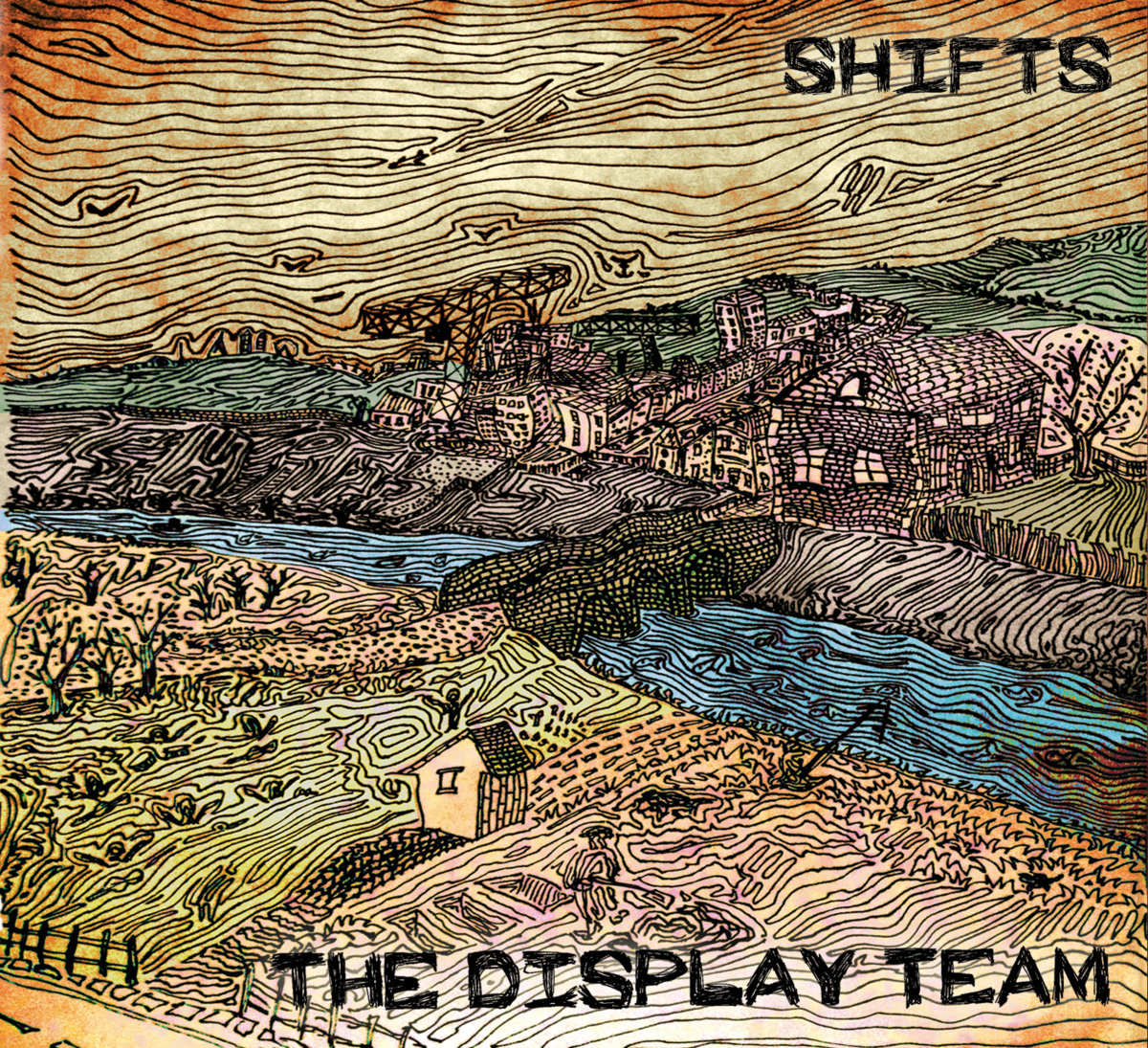 Band: The Display Team
Album: Shifts
Release date: 20 April 2016
Label: Opposing Forces Records/Kickstarter
Sounds like: Rocket From The Crypt Versus Cardiacs Vs Down I Go. IN SPACE.

First point. I’m convinced that the cover of Shifts is a zoomed out version of the cover of their first album, Drones.

Nerdy board game analogy. The Display Team are akin to throwing hundreds of D20s in the air and hoping they land on something resembling an outcome that’s favourable. Chances are it’s going to be an absolute cluster-fuck of madness, screaming, board-flipping, sheet-tearing, pencil snapping, face-clawing chaos. That’s probably only a smidgen really of what The Display Team sound like. This sextet of macabre carnival characters are driven by wild, hectic, frenzied energy and it’s fiery and exhilarating from start to finish. Shifts is their second record (it’s been 7 years since their first, Drones) and proof that the band isn’t dead. Just listen to any of the 10 tracks on offer – they’re practically clawing, gouging, scrambling over each other to be heard first, such is the speed and the intensity.

As the jerking prog-punk slam down of opener A Summer of Subservience hits – that sudden thrill rush, that injection of joy reaches your brain like a heroin addict experiencing a particularly glorious high. Lead vocalist and drummer Chuckles The Clown has never sounded so large ham in his vocal delivery, whilst the off-kilter shudder of meandering, punkish guitar lines collide with the rampant horn blasts of celebration. Mercy Nurse sails weirdly into the winds of metallic-ska and gets almost foot-on-the-monitors, big rock action, whilst the Lord of the Flies-referencing of the creeping jazz-rock Corpus Of Lies is a warped and melting Salvador Dali-painting of extremes, blasting past with that typical fizzling and relentless stamina.

There’s a brief moment to get your breath back on The Indecision Prism – beware though, you only have 55 seconds, until it morphs into the smooth-jazz beat-meets-sea shanty, as the crunching guitars start to bleed through into the stonking and resilient brass section. Chuckles The Clown opts for an almost rambling stream of consciousness, whilst the other voices add their weight, creating this almost glam-rock blast of Bang Camaro-style elation (not to mention the big-band carnival ending).

The comically aggressive punch of Epitaph bolts with breakneck speed; the mix of overlapping vocal wails, wild blasts of frantic brass and the out of control time changes will make your head spin as well as the cutting, “fuck the man” anti-capitalist lyrical content. At over 6 minutes in length, it’s a mammoth of a track; how The Display Team keep up this kind of pace I’ll never know. Bet you’ve never heard a song with an a cappella section singing about a trip do a DIY store? The Display Team have written one. I Am House, is…well, about becoming a house I guess. “break my jaw to fit the door in/slide some wires round through my veins” – we all have ambitions in life, becoming a Doctor or a Fireman, but becoming a house – sure, why not? Lyrically and musically, this might be the darkest track on Shifts – the screams of “HOUSE! I AM HOUSE!” at the end, coupled with the raucous Mr Bungle jazz-fusion of noise, plus the eerie string section, not to mention the odd-ball lounge-jazz intro. It’s a prog-punk masterpiece of black-comedy nightmare fuel; and I keep thinking of that Jam sketch where the bloke decides to have his funeral before he dies for some reason. In fact, this whole track, could be a Jam sketch.

The jaunty ska-pop-blast of Foreign Affairs feels oddly apt in this post-Brexit world; the lyrics “Artfully avoiding interrogation/smartly dodging offers of conversation/slipping out the back door…” brings to mind Boris Johnson distancing himself so far from the Prime Ministerial race, he was almost in another Universe. The media-damning squawk of This Is The News (“Delighted in fear-mongering…) is a baiting, satirical slab of groove-laden punk rock disdain and is delivered in such a way, every verse could be “this just in…” style headline, frantically shoved into our faces to digest and it showcases how there is method to The Display Team’s madness.

Somehow, this blend of styles works in every conceivable way. Yes, at times it sounds like Less Than Jake covering System of a Down on fire, running through a Papa Lazarou sketch, but in others, there’s moments of intricate, incredibly well-crafted melodic punk meets math rock covered in trombones. Shifts is a twitching, writhing, bonkers collection of tracks by a band who are content to be anything but predictable, but instead opt for engaging, bombastic slabs of primal musical anarchy – bravo The Display Team, bravo.