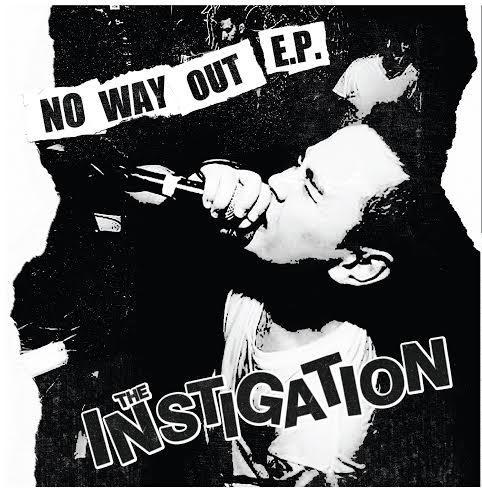 Band – The Instigation
EP – No Way Punk rockers The Instigation have no off switch. Even if you tried to calm them down (holding up photos of kittens, administering some kind of knock-out gas) you’d probably be rewarded with a beer to the face, some cackling laughter and being immediately ordered to stage-dive off a stack of amps.

Hailing from Shanghai, The Instigation’s roster is fairly spread out – their vocalist Simon Cochrane is from London, whilst drummer Tyler Bowa is from Canada and guitarists Tommy Fever and bassist Toshi are both from Japan. Although you don’t need to be really told this, as their music speaks for itself. Hearing the snotty, sneering accent of Cochrane spitting his venom over riffs that have that fuzzy, vibrant bounce of Guitar Wolf is somewhat of a delight. Opening track (cunningly titled The Instigation) sets a pace that never lets up – the rollicking, splattered drumbeats, Cochrane’s gnarled, vocal yelps and the scuzzy crust-punk speed of the guitars bring to mind Zeke playing Hi-Standard songs in double-time. Speed is a necessary key in The Instigation’s musical repartee and what they lack in subtlety they more than make up for in good, punk rock carnage.

if you like snotty, fuck-the-rules punk rock that will give you a heart attack, then this is for you..

No Way Out is a repellant, disrespectful blast of furious Black Flag punk rock and is utterly infectious as it is wickedly deranged. The guitar is a scrambled, mind-melt of jangled, scrawling chords and crunching basslines, held together by Bowa’s trash-rock drumming style and Cochrane’s distorted shouting, which is laced with snark and spitting fury. No Rules falls into the Black Flag territory again (think First Four Years, before Rollins) a breathless, sweaty and exhausting 94 seconds of hardcore, with an attitude that does state: “my life, my rules, no more bullshit!” to the max. The final track is a cover of the Reagan Youth song, Degenerated and they absolutely batter the shit out of it. The drums have reached a crescendo of cymbal-smashing ear-trauma, whilst the bass is a runaway train pummel of frenzy, completed by the distorted, caterwaul of Tommy Fever’s guitar. Utterly demented and makes the original sound like it was recorded by a drunken jazz band on Ritalin. No disrespect to the original, but this is a different take on a great song, noted for it’s fuzzy-low-fi guitar punk, whereas The Instigation tear themselves to pieces before they even reach the end.

The Instigation describe themselves as “a garage band who play hardcore songs, or a hardcore band who play garage songs.” No Way Out is a prime example of one of these things and if you like snotty, fuck-the-rules punk rock that will give you a heart attack, then this is for you.