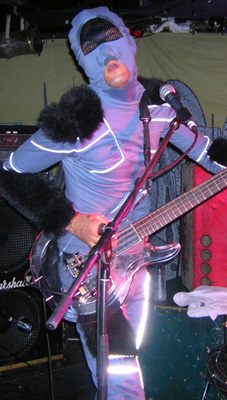 Two things surprised me about this gig.

1.) It was downgraded from the Scala to the Underworld due to poor ticket sales.
2.) The crowd were positively static.

Weird eh? Still, with support bands that made even Staind seem listenable, you can forgive the assembled haircuts (sorry, kids) for being slightly comatose. The horrific sounds of someone strangling kittens last for all of 20 minutes as Pre played through their thankfully short set. Their somewhat lacklustre bass-heavy sludge hardcore was about as entertaining as jabbing my fingers in my eyes. A messy, torturous din that I would quite like removed from my mind.

The next band, Htrk, were perhaps what The White Stripes would sound like if they spent all their time listening to drone music. Their guitarist, almost practically invisible sat somewhere on the floor, whilst a girl with long black hair absentmindedly hit a drum and wailed for a bit as the other guy tried to wrench a discernable tune from his bass. Still, it was 10 times better than anything Meg White can do. With a toss up between going to the bar and watching the rest of this musical car-wreck, I opted to exchange bullion for beer.

I must admit, I had some initial concerns about seeing The Locust live. My first worry was the noise level. Now, I like loud music, but ever since a scare I had 5 years ago at a Mighty Mighty Bosstones concert where I thought I’d lost my hearing, I always wear earplugs, regardless of the band. The Locust are known to be considerably noisy on record and I was in a panic regarding the kind of sound level they would generate. My other worry was in the form of the mosh pit. I didn’t fancy carrying my teeth home in a bag or waking up the next day with panda eyes. As it turned out, I shouldn’t have felt this anxious. Like the very insects they aim to mimic, the San Diego four piece took to the stage, looking more like deranged exterminators than an actual band. You have to hand it to them, The Locust have got this music thing pretty much sorted. They’ve essentially created a new sound that’s such a massive headfuck of nonsensical aura, it makes all other forms of music seem…well…redundant really. Such is the complexity of their music, they manage to squeeze 100 ideas into one 40 second song, more than most bands can manage in an entire career (I’m looking at you, Simple Plan.)

Banter with the crowd is obviously not on the cards tonight. The Locust are one serious bunch. The only words muttered throughout the entire 40 minutes of their set come at the end where bassist/vocalist Justin Pearson mumbles (“this is our last song, thank you”) before everyone’s ears are treated to another raping. Each song is played with such professionalism, such dexterity, such painstaking effort; they’re perhaps one of the tightest bands I have ever seen. No screw ups, no pauses, no smiles, it’s just bang, bang, mother-fucking bang. Tracks such as the wonderfully titled “We Have Reached An Official Verdict: No One Gives A Shit” deviate from the sludge-like synth squelch of the ‘Plague Soundscapes‘ era racket, but still stands up well as a wonderful example of hardcore punk put through the blender. ‘Recyclable Bodies in Human Shape‘ explodes like a puss filled spot; Gabe Serbian’s drumming is a full on battering ram of frenzied beats. I don’t think I’ve seen a better drummer in my entire life. ‘Live From The Russian Compound‘ (perhaps the band’s best known song) is slightly mangled and lost in the airwaves, however what resembles ‘Teenage Mustache‘ with it’s heavily distorted vocal/synth driven attack makes up for this. The crowning highlight appears in the form of the ‘Safety Second: Body Last‘ Ep, which the band play in full. Essenitally a 10 minute track, split into different sections, it showcases the band’s talent at breaking down and generally twisting their already contorted sound, into something even more sickening and evil.

Joey Karam’s synthesiser starts making the kind of noise you would associate with a Christopher Lee horror movie, for gods sake. It’s unsettling but extremely comical.

Too bad the assembled crowd fail to feel anything. Several kids attempt to mosh, but it’s all rather half-hearted and frankly, slightly embarassing. No one seems to be interested or even into the music; making me think they’re either hypnotised, dead inside or simply to astonished at what they’re witnessing.

As the final blast of grind-splattered punk hits the fan, The Locust depart the stage and everyone seems to wake from their apparent trance. To stunned to say anything, they shuffle towards the exit, many wondering just what the hell happened.