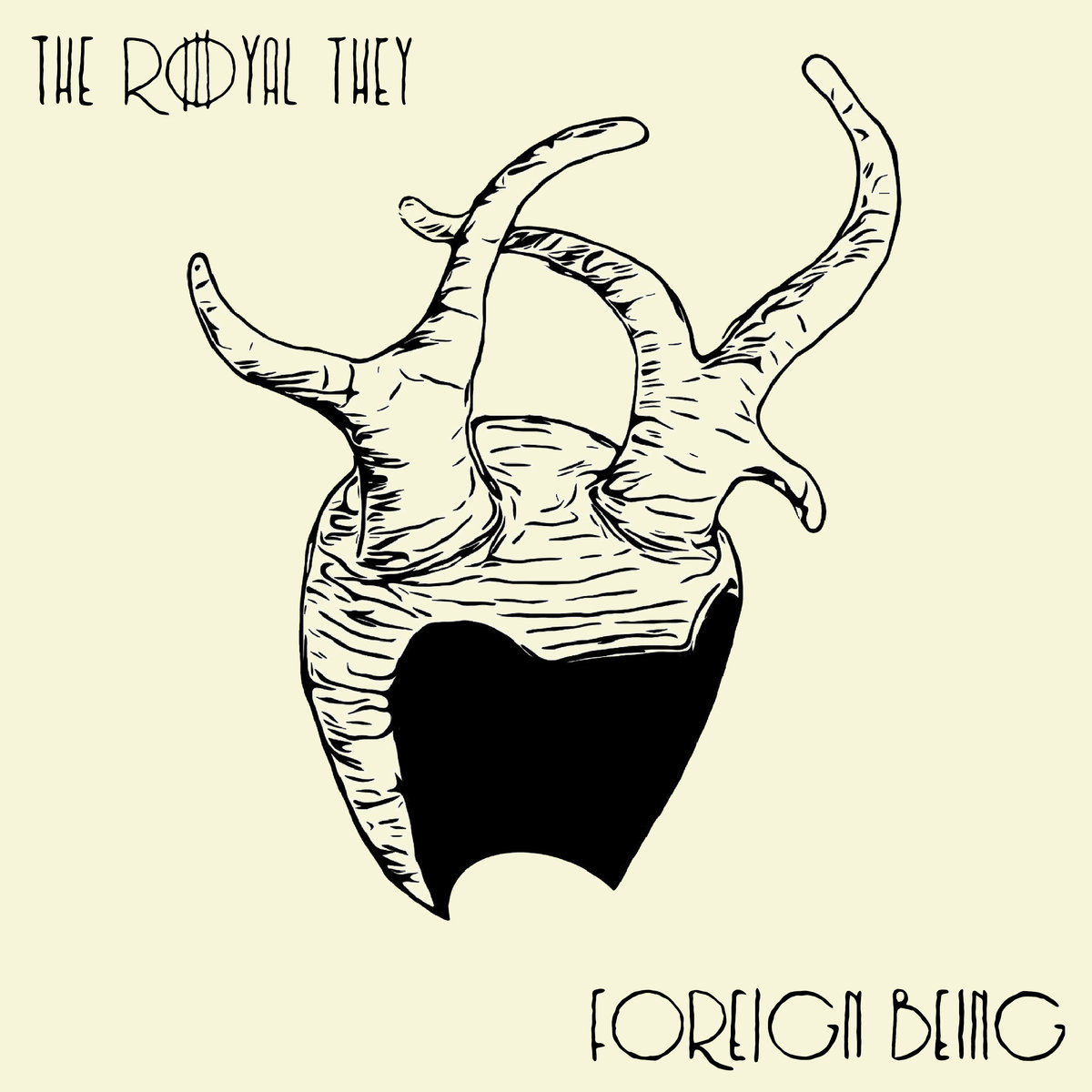 Band: The Royal They
Album: Foreign Being
Label: King Pizza Records
Release date: Out Now
Sounds like: Be Your Own Pet cutting you open with their guitar strings.

The stark contrast between the explosive snarl of album opener C.N.T. and the closing pop-punk blast of Weekender is one of the many, many great things about Foreign Being, the second album by New York trio, The Royal They. In fact, this album twists and turns itself inside out, reshaping constantly, but it is anchored by one common goal – to hit you hard and make you take notice. At first, it felt solely driven by anger – sure, there’s rage in this – boy, is their rage. The guitars howl and fizzle with acidic intent; but there’s also a hell of a lot of heart in this and that heart is pumping raw, bloody emotion from every ventricle.

Take C.N.T. for example (what’s missing? Just “U”) a rabid, powerful, brackish snap of furious noise; a rallying cry for those who have ever felt alone or lost in light of certain events in the entertainment industry. It points fingers and calls out all those with their “perverted breach” and talks of their “sick deceit” and is capped off with the huge “I know you’ll try to fuck the world/But you will not fuck me” scream from vocalist/guitarist Michelle Hutt. Powerful, emotional, burning rage spat with such passion and such vitriol and one of the best album openers I’ve heard in a long while.

Addiction and loss pepper the buzz-saw raw rock of Sludgefucker (excellent song title alert) as talk of twitching eyes, misunderstood anger and referencing moments of pure bliss (but being unsure why) are punched into your ears, whilst the dual guitars scrape and contort through a muddy slide of clawing turmoil. It’s also excellent and a brilliantly constructed rapid-fire piece of fiery riot-punk. This is met with the sledgehammer drums and booming riffs of Pandemic, which belch and hack a hoarse rasp of detuned, Torche-lite noise, held together with shuddering and bruising intent. Absolute credit to the guitars on this track, which chime with trepidation and stalwart misery and expand The Royal They’s discordant and blemish-erupting sound even wider.

The pedal isn’t always slammed firmly to the floor though – there are moments of reflection, especially on the cool-sounding indie-jam of Veritas, which builds into a crunching hard rock number, with an ever-so Smashing Pumpkins-vibe to proceedings and showcases the delicate beauty of Michelle’s vocals as opposed to her earlier snarls of cutting rage. Needler follows a similar path, as though you’re being stalked by the taunt guitar lines, the “I want you to know…” vocal croons and the churning, discordant riffs which lurch, belch and batter the airwaves, only to suddenly revert back to that eerie, menacing tone. Don’t be fooled by the sing-song voice Michelle has on the scything Say Less – while it might all sound all rainbows and smiles in the delivery, the noisy, ramshackle Be Your Own Pet-riffs and teeth-rattling percussion are devilishly corrupting.

It’s when we reach the end of the album everything starts to crackle with three chords and permanent joy. I cannot get out of my head how much Weekender sounds like a 90’s TV show theme. There’s something so “sunshine happy good times!” about the melody on this. “Yeah, I’m where I wanna be right now/Yeah, there’s nothing else to figure out” states Michelle, her lyrics bouncing brilliantly on this pogo-tastic pop-rock banger of an album closer, which absolutely shreds with infectious and confident zest and ultimate enthusiasm – superb.

More people need to hear this band. The frothing rage and high-five fun times in The Royal They is utterly captivating right from the word go. Foreign Being is a jagged, snarling, heckling, vitriolic blast of cathartic, boiling and positive punk. Join their racket now, you need this in your life and your ears.

Grab a slice of Foreign Being by The Royal They from King Pizza Records here or download directly from their bandcamp. Treat yourself.

The Royal They
King Pizza Records