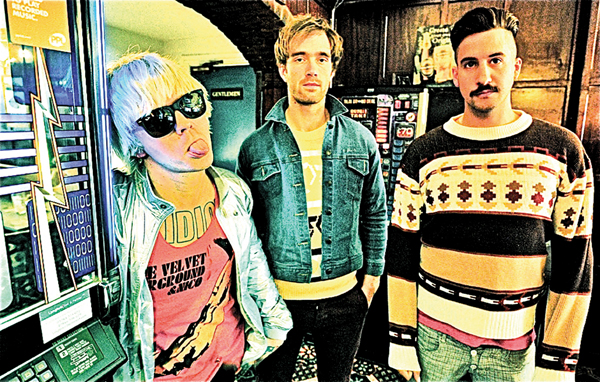 I remember Kill KenadaÂ and their video for Massachusetts Murder Medallions – the one where they’re playing in a filthy looking squat and can barely stand up for more than a second because they’re throwing themselves into walls/drumkits/the floor. Having been unable to work out if the band have actually split or are just on some weird hiatus; vocalist, bassist and man with loads of hair Tim Smithen (now under the moniker Timothy Vincent Cassini, maybe because it makes him sound like a character from Grand Theft Auto: Vice City) has decided to form a new band called The Semper Teens.

Somebody is four tracks of pop-influenced garage punk, that doesn’t sound a million miles away from Cassini’s previous band, albeit it’s a lot more direct and less erratic compared to Kill Kenada and their bonkers time signatures. Opening track Somebody, has a bass-driven surf punk vibe that you can imagine soundtracking a surfing wipeout video montage. It’s snotty, brackish and brings to mind early Ramones in delivery and also The Heat Tape for it’s rough, punk rock attitude.

Somebody should be blasted on a hot summerâ€™s day whilst downing several ice-cold beers and high-fiving your friends..

Happy to Believe is a brilliant slab of summery pop, that straddles between punk and grunge in equal measures, with a killer chorus, backing vocal harmonies and sounds like it was recorded in the early 90s. That gritty, fuzz-rock production, background ‘whoos‘ , tight rhythmic drumming and rattling guitars all make Happy to Believe the best track on offer here.

Never Right is a lot more stripped back and feels almost solemn in delivery; Cassini’s vocals are less yelped, but feel more questioning and laced with scorn backed by a minimalist pop-rock scrawl of desperation. Closing track Modern Love is also a slow burner, somber, yet hopeful vocals are met by shambolic drum beats, grungy-bass chords and optimistically tuneful guitars, giving this EP the feeling it should be blasted on a hot summer’s day whilst downing several ice-cold beers and high-fiving your friends because really, that’s what we want isn’t it? Simple, no-nonsense fuzzy-pop rock that we can enjoy and dance to and The Semper Teens have got it nailed. Fans of the Pixies, Obits and and stripped-down garage rock would do well to investigate Somebody – listen to it below.