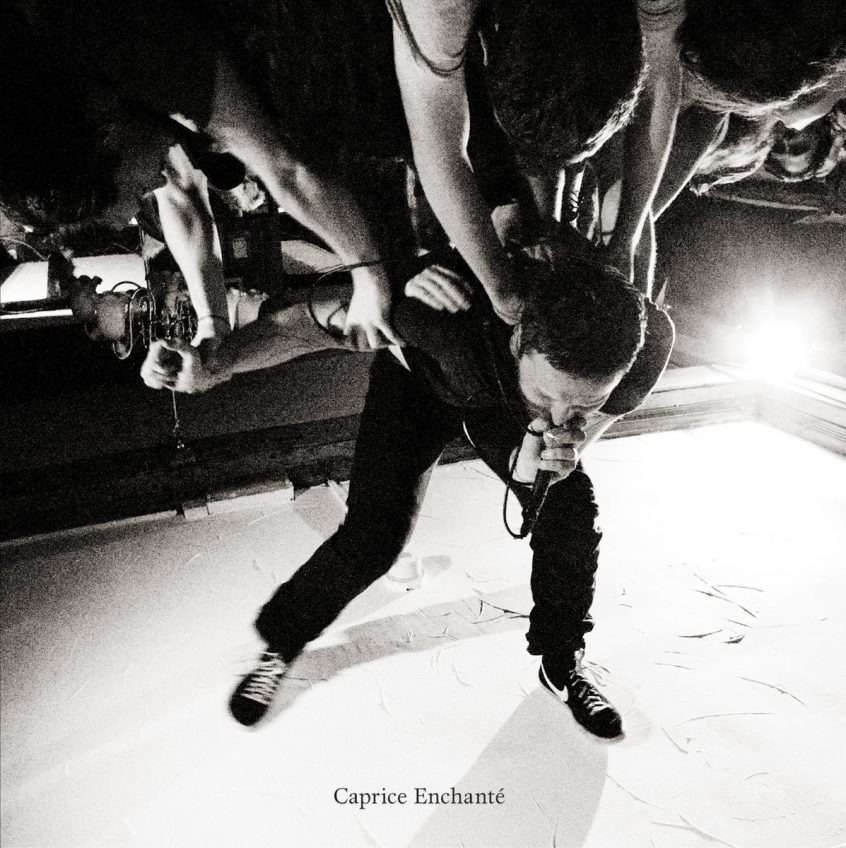 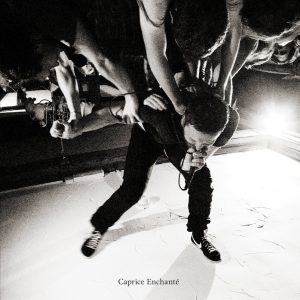 “There’s a light on me… and it blazes through the night.”

The cover of The St. Pierre Snake Invasion‘s second album, Caprice Enchanté features an inverted photo of vocalist Damien Sayell held aloft, pressed into the ceiling, screaming his head off. If any cover truly captures the content within a record, then this is it.

It’s been a while since I’ve heard an album that absolutely boils with so many conflicting emotions. The band state on their bandcamp page that it’s born from a reflection on ego, self importance, triumph, defeat and pride, meaning there are moments of great relentless joy, coupled with savage bloodletting, anger and elements of fragile hope. From first impressions though, absolutely everything on Caprice Enchanté sounds angry. From vocalist Damien Sayell’s ever-changing voice box (which is an incredible instrument) to the grinding guitars and trashing drum patterns; it barely gives you time to breathe, stampeding like a herd of braying buffalo, each with its own agenda.

This album immediately grabs you in a headlock and rams you into a wall from the get go with the bruising snarl of The Safety Word Is Oklahoma. That sneering, disgusted tone of Sayell’s is a recurring theme on Caprice Enchanté and it makes itself welcome in the first millisecond. The word unhinged spring to mind, especially as it seems to be retelling a particular disturbing kidnapping through the madness of Wonka and being gagged and bound on a merry-go-round in what I assume is a form of hell. I previously stated that if Remystery was anything to go by, then Caprice Enchanté would break some faces. In fact, it melts them right off down to the fucking bone. Just hearing Remystery again in the context of the album and it still sends a weird shiver down my spine and causes sweat to pour down my face. It’s a seething, aggressive shriek of deviant aggro-punk rock fire, held together by these slovenly, crushing riffs and Sayell’s hushed vocal whispers and vein-popping roars of bile.

The government-baiting swipe of the lurching Braindead sums up the horrors of the current political climate and is the audio-equivalent of the most poisonous moments of every episode of The Thick Of It forced into your ears.  The opening line of “You could smell that wretched stench for miles and miles and miles/through their hair and on their breath in varied crooked smile…” encompasses this horror perfectly, alongside the creeping warning on the chorus of “there’s someone in your garden and they’ve come for your kids” which is spat with equal moments of fear, warning, disgust and repulsion.

It’s impossible to start each paragraph with “the stand out track…” because, it could be any of the 13 on offer here. Take Carroll A. Deering for example, a volatile, guitar-swinging wave of destruction that mixes gnashing, mouth-frothing speed with the Llanelli Male Voice Choir that appears out of fucking nowhere, only to launch back into one of the dirtiest, heaviest, moustache-tweaking riffs you’ll hear all year and brings to mind the chaotic change of tempo and style of Josh Scogin’s The Chariot. It destroys everything, absolutely nerve-shaking and teeth-rattling to the core. Props to the Angels With Filthy Souls reference and the nod to Nicholas Lyndhurst as well (probably not, but we can dream!)

Good luck getting Casanovacaine out of your ears, it’s the kind of track that burrows its way in, sets up home and refuses to leave. That chorus of “anything could happen though you know it won’t” is the kind of slacker-anthem slogan you’ll hear screamed back from any of TSPSI gigs and it’s furiously fast, destructive and intense. Really, really hope The Idiot’s Guide To Music is a tribute to Bebop’s mate. There’s an almost shoegaze-esque haze to the guitars and the rolling melody on this, and it feels oddly warm and comforting, especially through the chorus gang-vocal chant of “all they want is ‘Rock steady‘”. Much like The Bronx, there’s a feeling that this is an album crafted to be belted out in a live environment, that encourages crowd participation, that is for the fans to grasp on to, to feel part of, to absorb, cherish, love and vent their frustrations, feelings and emotions through.

To reiterate The Chariot worship (Your from One Wing especially) the gospel-sounding It Gave A Lonely Light is a wonderful, 47 second interlude that drips with raw emotion and radiates a comforting warmth. The moodwhiplash kicks in though with  the following track, Omens, perhaps the darkest-sounding track on offer. Sayell’s vocals are a hollow, lost-tone when he chants the track’s title, and the layered intone of “fresh meat/old rope…” is laced with trepidation. It’s a nasty track, filled with venting, guttural screams, huge, crushing guitars, waves of scrawling, chopped-up feedback, tribal drum beats, crackling static and this eerie sense of dread and foreboding lurking in the shadows.

The journey reaches an end on the soaring and melodic I Am The Lonely Tourist, which feels like finally reaching that end point and just wanting to return to normality. Whether that’s the aim, I’m unsure, but it’s carried by some expert melodica from Sayell, and reaches huge, foot-on-monitors, ala Harvey Milk‘s The End in the cleansing, noisy and scathing coda.

You’re easily looking at a potential album of the year in the form of Caprice Enchanté. At very least it should be rearing its head in most, if not all, end of year lists. The St. Pierre Snake Invasion have crafted something truly magnificent – a passionate, volatile, staggeringly inventive and chaotic masterpiece of raging emotions and triumph.

Purchase/stream/kick your house to bits with Caprice Enchanté by The St. Pierre Snake Invasion right fucking now. Available on vinyl splattered by Pierre Brassu and Dick E. Mozart or download – treat yourself.