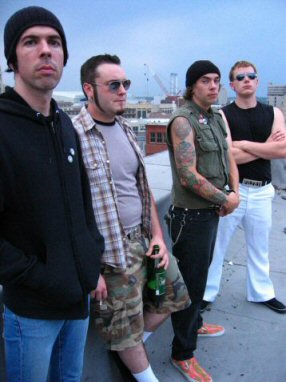 Oh no! A band that has a ska/skacore elements to their music! Flee! Run! Save yourselves before you start actually having a good time(!) God forbid you should be distracted from being the miserable, cyncial indie tossbag that you strive to be 99% of the time! (This anti-anti-ska rant was brought to you by the number 14 and the letter ‘S’)

The Suicide Machines were a punk rock band that existed for an impressive 15 years, from 1991 to 2006 where they officially broke up, mid-tour whilst promoting their 6th album, ‘War Profiteering is Killing Us All.‘ Ironic much? Well, perhaps not. In fact, war profiteering had jack all to do with the band’s implosion. Disputes between band members wanting to take time out led to the group deciding not to carry on (mid tour) and The Suicide Machines were no more.

If you’re still reading this, you’ll probably want to know some more information on the band’s sound. They were known for their fast, aggressive punk rock sound, skacore leanings and controverial political messages (particularly on their last 2 albums.) Some would perhaps state that the band didn’t really bring anything new to the genre and I’d be inclined to agree; however what they did bring to the table was well accomplished, fast-paced, insistent punk rock that was deeply rooted in the skate as well as the political rock scene.

Like many bands, they evolved over the course of their 6 albums, going from a predomniant skate-punk/skacore-thrash on ‘Destruction By Definition‘ and ‘Battle Hymns‘ (which showed an even more aggressive side to the band; one which would appear later on their last album.)

Their 3rd album, a self-titled effort; was aimed towards the pop-punk loving market and contained an impressive cover of ‘I Never Promised You A Rose Garden.’ ‘Steal This Record‘ followed this, showcasing the band’s heavier side, mixed with the pop-sensibilities of the self-titled effort. It also featured the band covering the R.E.M. track ‘It’s the End of the World as We Know It (And I Feel Fine)’ –

(Keep It Fast fact: last time I DJed, I played this song at the start of my set and the soundman commended me on such an excellent choice of song, saying the production was wonderful and wanted to know who the cover was by. I felt proud.)

Their fifth album ‘A Match and Some Gasoline‘ saw a return to the skate punk/hardcore sound (and a somewhat love for the hated font that is, Comic Sans MS) and the beginning of their anti-Bush regime beliefs – ‘Your Silence‘ in particular, made a statement about how not voting, means you never have a voice and no real say – in effect, you as a person are dead to the political system and to your country and that saying ‘politics doesn’t concern me’ you are already sentencing yourself to death.

Their last album, ‘War Profiteering is Killing Us All’ is perhaps their most antagonistic record and strongly opposed to the Bush administration.

Vocalist Jason Navarro and drummer Ryan Vandeberghe are both part of Left In Ruin.

Guitarist Dan Lukacinsky currently plays in Japanese band, The One Thought Moment (who don’t sound a million miles away from The Suicide Machines!) and also, Bayonetting The Wounded.