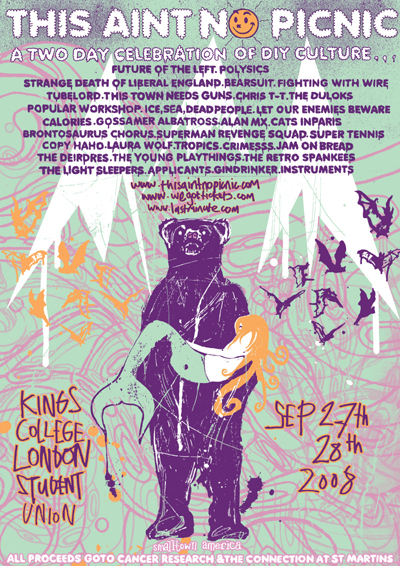 This is by no means a complete run down of both days, merely just a recollection of several of the bands I saw play over the weekend and my rubbish excuse for going home early on Sunday. Woe.

(Additional – due to my camera still being broken, the few pictures I managed to take turned out to be less than impressive. It seems that whilst the screen is broke, the ability to take a decent picture when you’re about 10cm away from someone is also reduced. I think about 2 pictures of This Town Needs Guns came out, which I may put up.)

Their on stage talk falls on deaf ears, i.e. no one really gives a shit, so thank god then for the music. 4 or 5 Magicians blast through a hectic version of American alt-rock with such gusto and eagerness, itâ€™s hard not to warm to them and attempt to shout along to songs youâ€™ve never heard. A set highlight was the feedback strewn ‘Ideal Manâ€™ and the delightfully melodic Weezer-lite, ‘Iâ€™m In The Band.â€™ Excellent stuff.

And So I Watch You From A Far

Irish-instrumental 4 piece who replaced Fighting With Wire, and a worthy one at that. Obvious comparisons to Oxes aside, ASIWYFAF decimate all before them with their gigantic riffs, which are heavy on crushing barrages of sonic destruction without a hint of pretension. Theyâ€™re joined by a bearded man named Ben for one track, who proceeds to splice jolts of spoken-word sound bites over the burrowing waves of glistening resonance.

It must be twee-time because Bearsuit make an appearance, dressed in superhero capes and blitz through what feels like 20 songs packed full of screaming, handclaps, shrieking keyboards and more screaming. Thank fuck I like them – superb set, although the banter between the mouse-like guitarist and the rest of the band was slightly cringeworthy.

Probably one of the weirdest bands Iâ€™ve ever heard. A confusing, collision of manic keyboard loops, high-pitched Radiohead vocals and erratic drumming. It shouldnâ€™t work, but strangely I found myself enjoying this carnival mash-up of bizarre sounds. Great t-shirts as well.

The Deirdres swarmed the stage like piranhas around a doomed swimmer. It’s too early for twee and I’m left feeling confused and slightly bemused by the shambolic racket they create – which at times, breaks through my barrier of disgust. Plus points for having someone that looks like an even nerdier version of Gareth Keenan on the drums.

Despite the lack of older songs that I know, Lewis Gordon and his Gossamer Albatross posse put on a fine performance upstairs, even with only one half of the new rhythm section they’d acquired (“our bassist is stuck on a train.”) Their rich heartfelt pop-meets-folk-meets-The Mountain Goats sound is nothing short of brilliance â€â€œ a band that deserves main stage status pronto.

A discordant, scrappy, barrage of Liars-if-they-were-more-punk-rock sounds in about 20 minutes.Ã‚Â  The guitarist spent half that time hitting the strings with his bare hands, rather than plucking them, whilst trading off quick-fire sound bites with his four-string counterpart. Like a faster, more pissed off version of Kill Kenada.

Apparently youâ€™re more likely to find rocking-horse shit than find this band on google. Of the five minutes I saw, Instruments were pretty damn good; taking the ever-popular math rock template and churning it with some nice pop-fragments, before turning everything up to 11 in hope of blowing a speaker/eardrum/someoneâ€™s head. Awesome.

Perhaps not the perfect hangover cure, but Let Our Enemies Beware are noisy as fuck. The triple-guitar attack of spiky, hate-fuelled post-punk is something that leaves me salivating for more.

Iâ€™m guessing the main stage has some sort of electrical current running though it, because Popular Workshop are all over the place. The bassist doesnâ€™t stop moving; throwing himself everywhere (falling off at least twice â€â€œ Iâ€™m surprised he had time to play his instrument.) The drummer continues to beat out a torrent of noise, whilst the guitarist chugs out waves of grungy-punk rock to an astonished looking audience. Amazing scenes.

Ehhhâ€Â¦.a musical version of a Colin Hunt-type, all wacky costumes, screeching synthesisers and no real tunes to speak of. Probably quite good for driving people insane but thatâ€™s about it.

The sweatbox stage is the perfect place to experience the delicate strumming of the quick-fast spoken word/acoustic-pop of Superman Revenge Squad, whose delightfully amusing songs about angry dogs, Billy Corgan and not being able to talk to girls bring a smile to my face. My only chagrin is my failure to obtain one of his superb handmade CD-Rs. Next time.

Even though tappy-Kinsella 4 piece This Town Needs Guns look exhausted, their scattered, jangly pop still sounds warm and inviting. The guitar-work alone deserves a whole paragraph of praise, ranging from complex to ‘how-the-fuck-does-he-play-like-that?â€™ New tracks from their debut ‘Animals,â€™ slot into a familiar template of soft vocals, backed by mathy hooks a treat. If a band thatâ€™s suffering extreme fatigue can play a set as good as this, imagine what theyâ€™re like at full strength. This Town Needs Sleep more like!

Actually incredible sounding â€â€œ agitated, brash-sounding punk rock, that deviates into the post-punk scrawl of These Arms Are Snakes, whilst still retaining its own sense of originality. Watching the 3 guitar-wielding maniacs thrashing their instruments with delight and the drummer steadfastly beats out slick rhythms in an attempt to keep them all in check is one of the highlights of the festival.

First time seeing these guys, which is strange considering their touring schedule. They donâ€™t disappoint; with yet another bassist quite content to contort and spasm his body in all manner of ways and still manage to play. The vocals range from a high-pitched Johnny Whitney yelp, to screaming indignation over waves of tight, stop-start punk. Definitely worth staying for.

Future of the Left (Headliners)

To round off the Saturday, Future of the Left play a terrific set, heavily weighted towards the side of making as much noise as possible, interjected with moderate doses of their cutting wit that always makes for a good show. They played nearly all of ‘Curses!‘ (No ‘Kept By Bees‘ – “that moment has gone” says Falco to one disgruntled punter) plus several new tracks and one that Kelso claims to not know how to play – “Andy asked me if I knew it and I said yes, but really I didn’t. I just made all that shit up!” before finishing with the 1-2 punch of the anthemic ‘adeadenemyalwayssmellsgood‘ and a 15 minute closer of adrenalin-fuelled, ferocious punk rock that had to be seen to be believed. Kelso spent the remaining set time pushing the crowd around like weebles, whilst Falco decided to make a tower out of Egglestone’s drumkit, which the stickman continued to play, right up to the point their dreadlocked roadie fireman-lifts him from the stool and carries him off the stage. One of the best things I’ve seen in a long, long time.

To conclude – even though I missed Polysics due to my immense tiredness, the weekend was nothing short of a huge success – Smalltown America should be thrilled with what they’ve achieved; the promotion of so many up-and-coming bands, a chance to see some old favourites and of course, all proceeds going to nominated charities. A label that truly works hard and is the epitome of the DIY aspect of rock music. Here’s to next year!

By a very tired, but happy, Ross Macdonald.