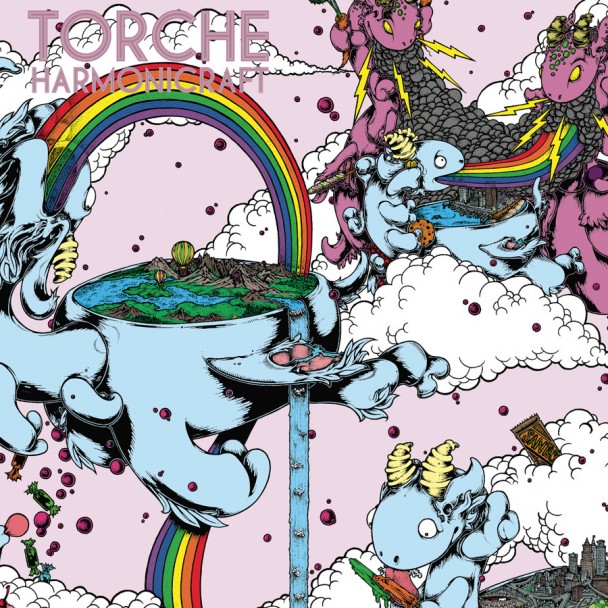 The artwork for Torche‘s ‘Harmonicraft’ is nothing short of incredible. Cute-looking pony/horse/monsters vomiting rainbows! Entire worlds trapped within some of these equine creatures, like some bizarre Terry Pratchett acid-dream! Pink demons with yellow eyes belching out black clouds and lightning! A space shuttle with a unicorn horn grafted on the front riding on a rainbow! Sweets raining from the clouds! Itâ€™s a mesmerising deranged skyscape of bubblegum and psychedelica. Artwork of the year, hands down.

â€˜Harmonicraftâ€™ is wonderfully optimistic. This is I suppose in opposition to other records that fit in the metal category. For one thing, you can actually read Torcheâ€™s logo without squinting. Not since Kvelertakâ€™s self-titled effort have I heard an album that brims with such vibrant technicolour â€“ such positivity, hopefulness and sugary goodness. Itâ€™s also heavy, like seriously heavy in places (hello, â€˜Looking Onâ€™) and unstable (pleased to meet you, â€˜Walk It Offâ€™ and â€˜Sky Trailsâ€™).

After reading the track-by-track run down by bassist Jonathan Nunez, I canâ€™t stop mumbling the lyrics to â€˜I Want Candyâ€™ over the driving opener that is â€˜Letting Goâ€™. It sets the pace for the album perfectly â€“ vocalist Steve Brooks has a cheery inflection in his gruff, echoing delivery, whilst the rumbling, pop-rock bounce of rolling drums and wailing guitars compliments the unintentional re-imaging of a sugary classic.

Why is â€˜Kickingâ€™ so damn summery? Itâ€™s like a giant burning ball of pink (yes, Iâ€™m going to mention the album art as much as possible) fire blasting out slick rays of hope and warmth. Itâ€™s the sudden change from bouncing, pop-rock chords to this crushing rush of hammering beats and when the guitars begin to spiral out of control, like a kaleidoscope of stoner brilliance, you know youâ€™re onto a winner.

â€˜Walk It Offâ€™ twists and contorts like a unicorn vomiting rainbows on a waltzer. When the guitars arenâ€™t howling in some deranged Queens of the Stone Age-stoner bawl, theyâ€™re scything complicated prog-stamps of chaotic beauty. It still sounds unashamedly pop-punk on the chorus â€“ the friendly, warmth of the relentlessly cheerful hooks compliment the cataclysmic breakdown of spiralling guitar dementia and totally fucking badass drumming. A breathless, exhilarating headfuck of yielding noise, with only one problem â€“ ends far too quickly.

â€˜Sky Trailsâ€™ is the partner in crime of craziness â€“ sounding like a cross between a better-produced Parts & Labor and Mastodon gone punk rock. A rollicking beast, with large ham vocals (â€œMASS HYSTERIIIIIAAAAAA!â€ bellows Brooks) complimented by colour-splattered riff after riff stacked on top of one another. Like Adebisi Shank, Torche are pushing space-rock into new and terrifying heights in around 70 seconds of blistering pandemonium. If you’re not doing topless air-drumming to this, have a fucking word, yeah?

The instrumental barrage that is the title track builds and evolves with such grace and surging beauty. Thereâ€™s a touch of 65daysofstatic about its sinister construction and it weighs heavy with trepidation and swelling menace. The muted electronic drumbeats and echoing cymbal clashes to the droning synths, wash through this 3 minute oddball experimentation and itâ€™s quite a shock when it cuts off so suddenly without warning, but oddly hilarious as though theyâ€™d planned something longer but the tape ran out. One of my favourite tracks on this album, and the most diverse.

That blues riff on â€˜Reverse Invertedâ€™ = hot damn, thatâ€™s sexy. You know the one, itâ€™s right at the beginning, bitches. Like Fu Manchu, but slower, dirtier with more howl and the 1970s shoehorned in, drenched in drugs and rays of neon light. The last two minutes are where the real joy kicks in and by joy I mean the â€˜bitâ€™. If you donâ€™t know what the â€˜bitâ€™ is, then shame on you. The â€˜bitâ€™ on this explodes around 2.32 â€“ you should now be smiling, crying or air-guitaring at the heavenly rock anthem of that â€˜bitâ€™.

‘In Pieces‘ is a fantastic tribute to the Melvins – thumping out a raucous stomp of low-end, sludge metal and some truly ridiculous flamboyant drumming. ‘Snakes Are Charmed‘ is packed with an overload of joy. The guitars paint thisÂ psychedelicÂ explosion of poppy-math rock, whilst Brooks’ vocals are satisfyingly positive and uplifting. As is ‘Roaming‘ which has Torche embracing and pushing the ‘thunder-pop’ sound they seem to have created to the very limit.

The album’s coda in the form of ‘Looking On‘ stands on it’s own at the ‘Harmonicraft‘ party. There are no rainbows here – what exists is gloom and doom. It’s an expansive, dramatic piece that feels the need to alienate all the pop-elements that have come before it and instead shifting the focus to a stark, menacing scrape of wailing guitars and crushed chords.

There’s a lot of ecstasy and joy to derive from ‘Harmonicraft‘. It’s a bright and uplifting record for the most part, overdosed with melody and the kind of riffs that will lock themselves away in your mind. Like ‘Gangs‘ and the first Kvelertak record, ‘Harmonicraft‘ makes me feel fantastic, from the barrage of guitar shredding, to the delicious pop-hooks. Torche have created an incandescent explosion of light through their sludge-metal-stoner whirlpool of sound and I doff my cap to them.

Not to write the rest of the year off just yet, but something pretty damn epic is going to have to come out to beat this one…