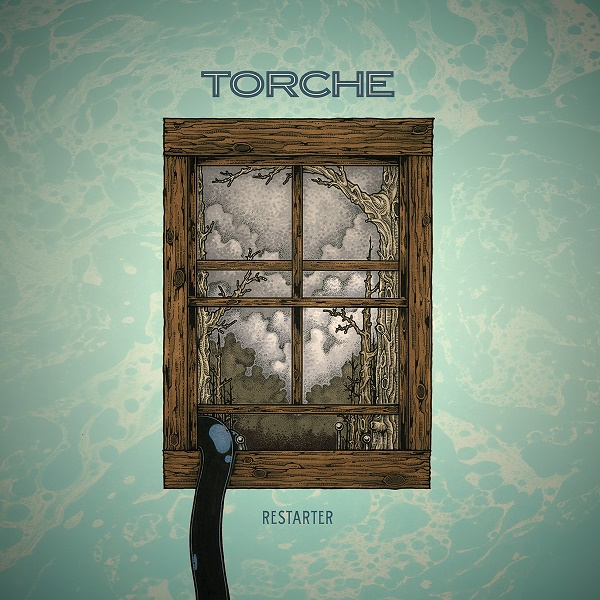 Bring on the boom. Torche are back. Repeat. Torche. Are. Back. Things were busy outside of the Florida-sludge camp last year – vocalist and guitarist Steve Brooks was working on the new Floor album, Oblation and guitarist Andrew Elstner was creating relentless awesomeness with Tilts on their second album, Cuatro Hombres. Restarter is Torche’s fourth album and the second to feature Elstner after 2012’s bubblegum-doom-pop that was the excellent Harmonicraft – an album that divided opinion in the Torche fanbase, from those who liked the new sunshine-stoner rock to those who missed the full weight of glorious, crushing silt that made up their debut. (Personally, I wouldn’t trust anyone who didn’t find Harmonicraft an absolute blast).

What of Restarter then? Well, it’s heavy – monstrously heavy, which is never a bad thing. It’s as if Torche have decided they want to crush the listener; compacting their body beneath a press constructed entirely out of hammering riffage. The brilliantly titled Annihilation Affair does a superb job of blocking you into a corner  straight from the off – the opening salvo is an unrelenting bombardment of guitars being fed through a huge industrial grinder; splintering fret-boards, broken necks, snapping strings all spurting out the other side. The see-saw guitar dynamics create a wall of punishing sound that Brooks and Elstner’s echoing vocals bash against with ominous urgency. The last minute and a half breaks down as the aforementioned grinder finally chews through the six strings, ending in a crescendo of howling, sludge-covered feedback.

The likes of Bishop In Arms however, resets (or restarts?) everything back to the beginning by being the second most ‘pop’ track on offer here. Mind you, it’s still suitably gnarled – sounding like Husker Du on steroids, this is a muscular blast of upbeat, frenzied delight packed into just over 2 minutes. Topped off by Rick Smith’s tight, concentrated drumbeats which, are a rumbling march to war and Jonathan Nuñez’s grinding bass stabs, this is gloriously thunderous. Things head back into sludge-town with the hulking lurch of Minions, an unsettling and slovenly lurch of stoner-noise rock that reverberates with unholy menace as it gets progressively more and more Mastodon-like in the closing fervour of shrill guitar-theatrics and Brooks’ melancholy vocals.

What of Restarter then? Well, it’s heavy – monstrously heavy, which is never a bad thing. It’s as if Torche have decided they want to crush the listener; compacting their body beneath a press constructed entirely out of hammering riffage..

Loose Men is easily one of the best tracks Torche have committed to tape and the stand-out track on Restarter. Unashamedly rooted in the Harmonicraft territory, it bristles with choppy, happy guitar lines, delirious 80s-music-video campness and radiates wonderful fuzz-rock sunshine from its handclap-like drum patterns and razor-sharp riffs. You’ll struggle not to hit the repeat button on this again and again. Fun-metal has never sounded so good. Blasted is similarly a pop song in sludge-rock clothing, being equally melodic punk rock with that noise-fuzz sheen deeply embedded in the serrated caterwaul of majestic shredding.

Dials are cranked past 11 when it comes to Undone, a bombastic blast of  lurching, guttural stoner-noise that packs a killer crunching punch of beefed-up bass and absolutely rollicks to a sudden and breathless conclusion in all of 101 seconds of punishing power. The droning whine that opens No Servants eventually evolves into a chugging almost High On Fire bludgeon of vicious, sprawling raw-rock, whilst Believe It is a teeth-rattling hum of swirling, atmospheric drone-punk , built on multiple layers of spiralling and scrawling guitar lines, whilst Brooks’ ethereal vocals press against this robust and damaging onslaught. Speaking of onslaught, I don’t even need to go into what Barrier Hammer sounds like, because it’s name perfectly sums up the musical outpouring. By the time the 8 minute hypnosis of the title track has steamrollered past, you can see how the reunited Floor in still ingrained in Brooks’ system; refusing to leave.

I can’t help feel though that the pop-elements have been somewhat diluted on Restarter, which is what made Torche stand-out from the crowd in the first place. It’s weird, how I always want Torche to be more ‘pop’ whereas, Axis Of, who in 2013, I billed as ‘Ireland’s Torche’, I want to sound heavier and both bands have take opposite paths this year.

Is Restarter one-dimensional? Hard to say. They were never going to make Harmonicraft Part 2; (I think Harmonoslaught, Rock N Roll Mantasy, Keep Up and Leather Feather proved that…) but I can see how some people might feel a bit confused by the direction they’ve taken with Restarter. However, given time, this album is packed with 10 well constructed and dynamic songs to play at ear-destroying volumes. I’m sure Restarter will be utterly devastating in a live environment.