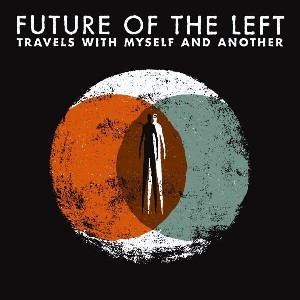 Band – Future of the Left
Album – Travels With Myself and Another
Label – 4AD
Release date – 22nd June
Sounds like – a bowel rumbling, heart-racing, rock fuck of resonance.

A personâ€™s attention span is a fragile, brittle wafer; ready to be soaked by the crushing wave of distraction and the promise of shiny objects. The need for more and more frantic, violence saturated computer games, garish, hyperactive sugar-loaded tv shows and the abundance of chinless wonders wearing bikinis and ‘singingâ€™ the same songs over and over on a building site/gym/street corner/badly-lit room featuring Justin Timberlake is increasing. Therefore, there is very little point in any new music running longer than an episode of Blackadder. As we know, the greatest albums last around half an hour:

But in general, half an hour of music is to me, a perfectly acceptable running time. No chance of unwanted track padding, just a concise selection of songs, with guaranteed quality through and through (Sum 41 are an exception to this rule).

Future of the Leftâ€™s ‘Travels With Myself and Anotherâ€™ joins the high-flying ranks of albums you can listen to in the same time it takes to cook a Sainsburyâ€™s chicken pie. At around 33 minutes in length, itâ€™s a concise, vitriolic bombardment of satirical wit, guttural riffs and songs that tackle Satan through to Manatees. I described their first album as a “well constructed, scathing and a hilariously-riotous musical packageâ€Â (in my review from almost 2 years ago!) and ‘Travels’ Takes this template, examines it carefully under a microscope for a while, scribbles some notes then decides â€œfuck thisâ€Â, trashes everything with a big hammer (on fire) and begins mutating into something even more callous and infectious to the power of 12.

Like 2007â€™s ‘Curses!â€™, ‘Travels With Myself And Anotherâ€™ features a powerful and intimidating opener. Instead of the grinding, sludge of cacophonic dread; ‘Arming Eritreaâ€™ opts for a more sinister, down-tempo build up of gentle guitar strumming and soft drumbeats, before Falcoâ€™s distinct and acerbic vocals slice through the music like a hot knife through flesh. His roar of â€œcome on Rick, Iâ€™m not a prize, Iâ€™m not a cynic or one of those guysâ€Â is a line that Iâ€™m sure will be quoted with equal gusto from die-hard fans, whilst the salvo of feral noise-rock that accompanies it is delightfully air-punch worthy. God knows how Falco made his guitar sound like a keyboard being circuit bent, but the organ-esque ring on the chorus has a distinct ivory tone that drones and rattles with wild malevolence.

Iâ€™m reliably informed by wiki, that ‘Chin Musicâ€™ is a euphemism for ‘punching someone in the jawâ€™ – making this song title apt for the lyrical content regarding hitting someone for â€œmaking them mad.â€Â This 2 minute rush of arrogant angry rock is enforced by Falcoâ€™s throat-burning screams and the bleak, yet caustic crush of the muffled squeal of Kelsonâ€™s bass and Egglestoneâ€™s concise drumming.

‘The Hope That House Builtâ€™ marches along like a division on punishment detail. The beat follows a regimented stomp, with Falco and Kelson calling for the listener to join their â€œhopeless cause, come join our lost causeâ€Â and possibly touches on a sort of reverse futility of war, by stating â€œin the end, everybody winsâ€Â, whereas war is predominantly seen as an ‘everybody losesâ€™ scenario. Well, if youâ€™re a jobless hippy waster you do. The synthesised fuzz of the wonderfully titled ‘Throwing Bricks At Trainsâ€™ follows a jaunty, pop-tinged edge, complete with a jolting, stop-start canter. The lyrics touch upon bowl movements and a one Reginald J Trottsfield and Lieutenant â€œThe Fearsome Brownâ€Â two gentleman that possibly enjoy engaging in the sport of hurling lumps of masonry at train carriages. There is a fair amount of harmony and bounce here, which gives nods towards the swagger that was last heard on ‘Wrigley Scottâ€™ from their first outing. Any thought of Future of the Left mellowing is dissipated by the next trio of venom-soaked slices of coldness. Thereâ€™s something delightfully infectious about the strolling bassline on ‘I Am Civil Serviceâ€™. The satisfying stabbing nature and the screeching shred of the guitar, coupled with the AK-47 burst-fire drumming fills my ear canals with a sense of evil joy. Even the oddly placed high-pitch of Falcoâ€™s voice on the chorus fits his rage-fuelled rant during the main verses â€œso I ate what I fucked and I fucked what I ate am I worthy?â€Â

The bottoming-out rollicking of ‘Land of My Formersâ€™ is a discordant grind of punk rock fury. The dominating, and frankly nightmarish drawl created by Kelsonâ€™s bass truly showcases the twisted and torturous nature that Future of the Leftâ€™s sound has evolved into. However, it all pales in comparison to the next track, ‘You Need Satan More Than He Needs You.â€™ The squelching rumble of the synthesiser is the first indication of something unwholesome. Itâ€™s like seeing the good part of Harvey Dent, then as he slowly turns to face you, the realisation that youâ€™re staring into the eyes of a twisted, forever grinning monster. The listener is then assured how ‘awesomeâ€™ Satan is and how perhaps you are but a mere plaything to the king of hell; his bitch as it were, whereas he could give two fucks about how important you are. This song though, is littered with lyrical gold; from the opening lines: â€œGoddamn itâ€™s gonna rain, I only brought my socks, the night might hide my shame, but shame wonâ€™t dry my ballsâ€Â right the way through to Falcoâ€™s disgusted but indifferent rant of: â€œIt doesnâ€™t look like a man, it doesnâ€™t talk like a man, but does it fuck like a man?â€Â Itâ€™s an unfeeling, callous piece of music that battles an air of despondence against a crushing wave of malevolent sarcasm.

People do terrible things â€â€œ murder for instance, pretty bad. Armed robbery â€â€œ just try and remember your PIN and you wonâ€™t need to hold the place up with a sawn-off. But it seems the worst, most heinous crime of all is using plastic cutlery. On ‘Stand By Your Manateeâ€™ Emmaâ€™s mum and dad are exposed as a right pair of plastic fork appreciating gimps in one of the most bizarre and unexpected stanzas Falco has ever written.

‘Drink Nikeâ€™ is the only track to feature from the 4 showcased on the bands live tour back in 2008, with parts of ‘Distance Jabs At The Soulâ€™ being spliced into the aforementioned ‘Manateeâ€™ song. Whilst the track doesnâ€™t ridicule the sports manufacturer as much as Iâ€™d hope, it seems to bring to mind an explosive scene from Die Hard With A Vengeance. The spluttered guitar strumming and meandering bass line and solid drum beat evolve into a scuzzy barrel roll of stuttering punk rock that sneers with corporate disgust.

The bizarre lyrics on ‘Lapsed Catholicsâ€™ seem to be that of a rambled conscience, possibly written during a mad hallucinogenic fever. Littered with references to the Shawshank Redemption, Sky news and Murdoch, the first half acts as a calming, guitar-plucked introduction that launches into a slab of punchy, hardcore-rock stating quite clearly, that â€œLapsed Catholics are the worst.â€Â Whether theyâ€™re as bad as Murdoch, I have no idea, but itâ€™s the kind of volatile absurdness Iâ€™ve come to expect from Future of the Left and itâ€™s truly masterful.

‘Travels With Myself And Anotherâ€™ is proof that the concept of difficult secondÃ‚Â album syndrome doesnâ€™t exist – Future of the Left are one of, if not, the finest and most aggressively hilarious band to emerge from the UK music scene. Pretty much a flawless selection of songs, musicianship and contemptuous lyrical sound-bites; my advice? You need this album and it needs you.
–

Future of the Left
Myspace
Label