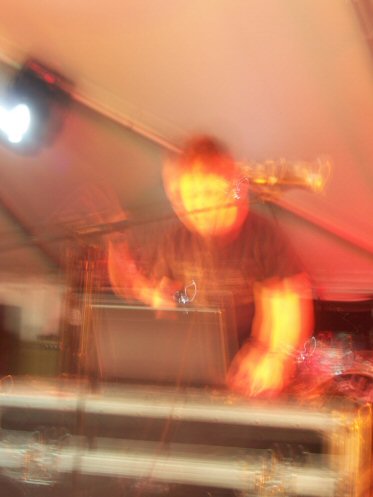 After waking up with a mouth that tasted like I’d been drinking sawdust milkshakes, I proceeded to get myself a cup of tea and a burger, then stroll into town to stretch my legs, buy some cider and have a nice relaxing pint in the local pub. A perfect start to a Sunday I feel!

After a long troop back to the campsite and a quick toilet break (I know you want to be updated on this;) I made my way to the Trailer Park tent for Napoleon IIIrd’s [7] set. Using a wide change of childlike toys, gadgets and gizmos, (as well as the conventional guitar) this Leeds based musician exhibited a quite eclectic and varied set of pop nuggets, supported by a drummer with the best facial expressions ever and an absolute master of the kit. An impressive and captivating set that was slightly let down by the somewhat warped acoustics of the tent. Great drummer, mind.

My next musical exploit appeared in the form of The Mules [7], a London based four-piece. They started off quite uninspiring and just as I was about to get up and leave, their music did a complete 180! What came next was a quirky blast of hillbilly-esque ramshackle rock-n-roll that mixed elements of country, ska and psychobilly. Those nearest me looked unimpressed; until they broke out a Talking Heads cover (I’m unsure of the song.) A slow start, but they left on a high! My only chagrin was that I didn’t dash down to the front and start dancing like a maniac.

One of my many regrets about the Saturday leg of the festival was missing Fuck Buttons, a noise-based two-piece from London. Apparently, there was a mosh pit during their performance at the Barn Stage. A mosh pit – to Fuck Buttons. That is class. I was rewarded however, by some overheard information reporting that the ear-splitting talents of Mr. Andy Hung and Mr. Benjamin John Power would be playing a 30 minute set with dance-troupe Neon Productions in the Theatre tent, so off I went!

After some poetry provided by Hammer and Tongue, Neon Productions took to the stage and Fuck Buttons [8] set up in front. What burst forth, was the sound of continents splitting, an aural explosion amalgamating into one terrific noise; followed by the destruction of a mighty planet. Mixing electronic beats with tribal drum blasts and copious amounts of heady white noise; Fuck Buttons created new music and a new language, simply stunning. I suppose you could say, I finally ‘got’ them. Whether this was the kind of music you would attribute interpretive dance to I’m unsure, but Neon Productions were admirable.

But like all things good, something bad has to crop up. Call me a pessimist, but I’m totally right on this one. After being warned of George Pringle [3] and her scattered spoken-word sixth-form poetry talked over a backing beat, I still watched a good 15 minutes of her set. I’m being quite kind in saying it was dull, as I overheard someone leaving say “watching that was like going to the doctor and being told you have cancer.” Ouch.

Obviously, Robin Gibb regarded himself as too important to turn up, so after much speculation about who the special guest would be, (a run down of guesses included the following: Slipknot, Meat Loaf, Creedence Clearwater Revival, Limp Bizkit, The Ataris, Oxes, Charles Bronson – fronted by the Charles Bronson, Fieldy, Liam Lynch, Andrew W.K., Rammstein, Exit the Wizard, and many more….) The Scha La La’s appeared and we all went back to the campsite.

Back at camp (and a few ciders later) I was made to resemble a gay-KISS werewolf. The next band up were Winnebago Deal [6] who decided that checking volume levels is for complete losers and the only way to play is to turn everything up to about 11 and destroy it. The fact is, they are a bit ‘one trick pony’ but the standard of the music they play (heavy stoner-punk rock) is so excellent; they are definite leaders in the field. I couldn’t help but feel that turning down the sound just a fraction would have made the live experience more enjoyable. Saying that, they played both “With Friends Like These” and “Reeper” before I departed for Rolo Tomassi, and before my brain and eardrums were reduced to grey sludge.

Band of the weekend award fell into the sweaty hands of Sheffield’s Rolo Tomassi [9], who were simply breathtaking. The fact that this band are still so young means that they have so much ahead of them to accomplish, it’s scary. Their debut self-titled Ep, is a thing of pure grind-pop brilliance and what they play off of it tonight shreds ears and fires arrows through new hearts of those experiencing the band for the first time. Diminutive vocalist Eva is screaming with pain one moment, before dancing like a drunken ballerina the next; whilst keyboardist James has fits trying to play his instrument, jerking around like a crazed marionette. Deadlier than a lethal injection on death row, Rolo Tomassi are pretty much unstoppable, especially in a live environment.

After this chaotic breakdown of frenzied noise, Metronomy [6] provided adequate light relief with their electro-meets-indie disco rock, even though at times their t-shirts were far more captivating than their actual music. At the end it was a toss up between watching Oxford’s nervous_testpilot [9] or sit through Idlewild trying to regain their past glory. I decided that rather than seeing Roddy Woomble and his gang plough through some dry, flaky indie, an hour of techno would be much better. I was right. With many inhibitions completely lost, nervous_testpilot took me to another world with his frantic breakcore/techno-noise attack, turning the Trailer Park tent into one massive rave. Possibly the most fun I have ever had at a festival (aside from the disco shed dancing) and the chopped apart remix of Queen’s “Don’t Stop Me Now” capped it all off.

The night ended with dancing to ‘Young Folks‘, the obligatory game of football (3 hours) and a thunderstorm, followed by a nightmare bus journey home. Great days, great days. Keep It Fast recommends Truckfest 100%.