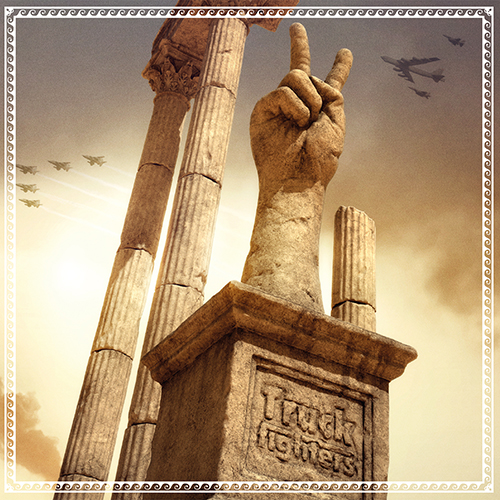 Crushing everything in their path with waves upon waves of punishing fuzz, Sweden’s Truckfighters burst back onto the scene with their fifth album, cunningly titled V. Now onto their 8th drummer, El Danno, (proper Spinal Tap shit going on here) – they’ve suffered some drastic line-up changes since their inception; hopefully now, they can remain stable for a bit! Although, stability is something that doesn’t exist in the lorry-combating world of these maniacal Swedes. In a live setting, they’re absolutely electrifying – guitarist Dango is a raging, topless ball of energy; fly-kicking his way around the stage (their Sonisphere set from 2014 was sublime) whilst vocalist Ozo, wears his bass practically scrapping the ground, hammering out thumping jams right through your skull. Gnarly.

As previously blogged about – Calm Before The Storm, the opening track to V, is a complete curve-ball – it’s staggeringly weird when considering the kind of racket they made on Gravity X and Phi. The slow, creeping build of the morose and troubled bass line, coupled with the gentle guitar harmonics and Ozo’s fragile vocal utterances exist for near 4 minutes, before the band slam into a wall of shredding, gnarled prog-fuzz meltdown. The lyrics are also perhaps some of the deepest and emotionally wrought that the band have penned (based around a murder) it’s a stark and sobering siren that showcases a different side to Truckfighters, a sense of maturity and how they’re not afraid to tackle difficult or perhaps controversial subjects. A full statement about the video can be found here for those who want to find out more.

Right, time to shift this into a different gear. I defy anyone to not be playing an imagery air-bass on the clunky ramshackle opening of Hawkshaw; then sit back and absorb the bizarre mind-melt of a music video; which is like some kind of nightmare-mix of Carmageddon, Turbo Kid and Road Rash set in the Sin City universe. Yeah, someone write that film, right fucking now and this choppy, prog-punk belch of roaring stoner-rock can soundtrack the whole thing.

Everything is drenched in bong-infused tremors on the bombastic slab of brutality that is The 1 – obviously a huge light was shined up into the sky saying “MORE CYMBALS” as stand-in-for-this-song drummer Peter Damin attacks his kit with crashing precision and frivolity. There’s a heady amount of groove on this; it’s slick and sultry in places and rips through with a neutron bomb blast of energy and huge chunky slabs of thumping bass. Commence thy headbanging – you’ll be air-punching with joy through this bombardment of shredding salvo and high-octane electrifying power. Easily one of the best tracks on V, and one of the best of their career to date.

It would seem on V, Truckfighters are constantly changing gear; trying to locate a new speed to set their punishing riff-o-rama at. Credit to them for this, man cannot live just on walls of amp-wrecking feedback (although it’s a bloody good meal). It’s this progression though, that sees these Swedes carve out some neat little tricks. Take the bowel-rumbling grumble of Gehenna for instance; its a curious, prog-metal meander that lurches and staggers about with wild delirium and slightly suffers from being too fucking loud in places (seriously, listening to it with headphones on and it becomes a sonic annihilation). On the flipside, track 5, The Contract is a teasing, bass and drum scuttle of stalking and surprising melody, that builds and builds, taunting the listener with sporadic drum rolls and finally it ensnares you with some killer hooks, dragging you inside. There’s a real southern-rock swagger to Ozo’s voice around the mid-point of this 7 minute jam-session of Clutch-worthy elephant-riding power.

The see-saw guitar on the anxious and taunt Fiend is again, melodic to the very core – ditching most of the trademark fuzz, bar some stoner-lite licks, whilst the cowbell-heavy percussion rages on and Ozo’s distorted, soulful vocals are lost in the growing, growling turbulence. Storyline concludes V in the only way it can – layers upon layers of spaced-out, sweaty, relentless jamming, with three sudden acoustic breaks that come out of nowhere, but give you a breather before onslaught continues in a full psychedelic wig-out.

V and Truckfighters might just surprise you – don’t underestimate them or this album, which is a cracking blast of consistent, raw dynamism and grit.