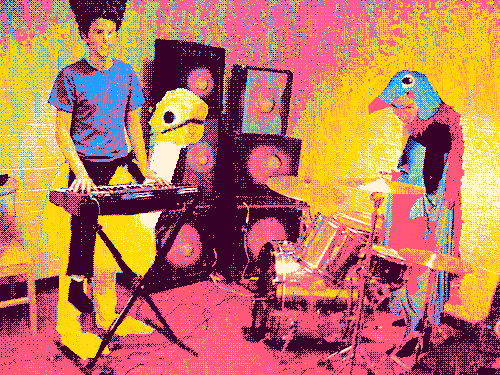 Band â€“ Tumbleweave
Album â€“ â™ªâ™«â™ªâ™«â™«â™«â™ªâ™ªâ™«â™ª
Label â€“ None
Release date â€“ out now for free download at bandcamp
Sounds like â€“ someone smashing up Road Rash/Sonic/R-Type/Space Harrier and then gluing them back together.

We get a lot of submissions through to KIF, some I donâ€™t always get to look at, or I sit listening to for a few moments and toss to one side. Wet indie for example, can go set itself on fire and run into traffic. Some gems do crop up though and also some incredibly fucking stupid bits that are so impressive, I canâ€™t help but fall a little bit in love with. Tumbleweave are just that.

First a word of warning: those who suffer from epilepsy best not visit their myspace page, because itâ€™s like being shot in the face with a disco ball, then having Barney The Dinosaur and Kirby sandwich their buttocks on each eyeball. The goggles indeed do nothing, nothing! Tumbleweave are a duo from New York, who have obviously spent far too much time listening to the Space Harrier soundtrack, whilst snorting sherbet off of pictures of Sonic the Hedgehog. Whether the world needs more guys reinterpreting the Jet Set Radio soundtrack using a cheap keyboard and half a drumkit, fuck knows, but Iâ€™d take about a billion of these over some of the earnest bedwetter fringecore I sometimes have to endure.

You know what though? I like it. For the most part, it sounds like two dudes jamming a conglomerate of noise and sounds, frantically shaping it into something that both can just about stand to listen to, before slapping it together and chucking it up on the interweb. â€˜Mystery Lynchâ€™ is a squelching, bleep filled cacophony of techno-coloured vomit. If something isnâ€™t being trodden underfoot in a hail of compressed keyboard slams and stuttering drumbeats, itâ€™s levelling up like Mario going batshit on goombas. One part sounds like a casio being dissolved in a spew of an electronic nightmare. That lasts for 58 seconds. Yeah. Itâ€™s like listening to and Attention Deficit Disorder version of Fuck Buttons.

â€˜Pornstars Built The Pyramidsâ€™ is dominated mostly by the decrepit drumming and this feeling of sometime attempting to play said kit whilst tumbling down a flight of stairs. The glitching disharmony is the nails down the blackboard of pong-style back and forth sweeps of cutting beats, backed by quick roaring waves of decaying fuzz and childish glee.

â€˜Rumbleweaveâ€™ on the other hand, buries the somewhat steady (ok, rickety) drum breaks under a block of growling fuzz and pressured key changes and patterns. First, itâ€™s like listening to someone trying to play grunge using a Gameboy; second it strives to shoehorn in an end of level boss theme through an opening 10 sizes too small, crushing their R-Type blast-beat resonance into a plummeting drop of cascading dread.

I assure you, that my primitive descriptions arenâ€™t doing this justice enough. For fans of one-man French noise-machine Duracell (who is possibly an indirect influence), Mindflayer, Wizardzz, Horse The Band and being lost in a torturous vortex of shapeshifting patterns with a buckload of SNES and SEGA soundtracks on loop. Forever.

Actually scratch all that, itâ€™s like listening to the whole of the Sonic 2 soundtrack being played in Hell.