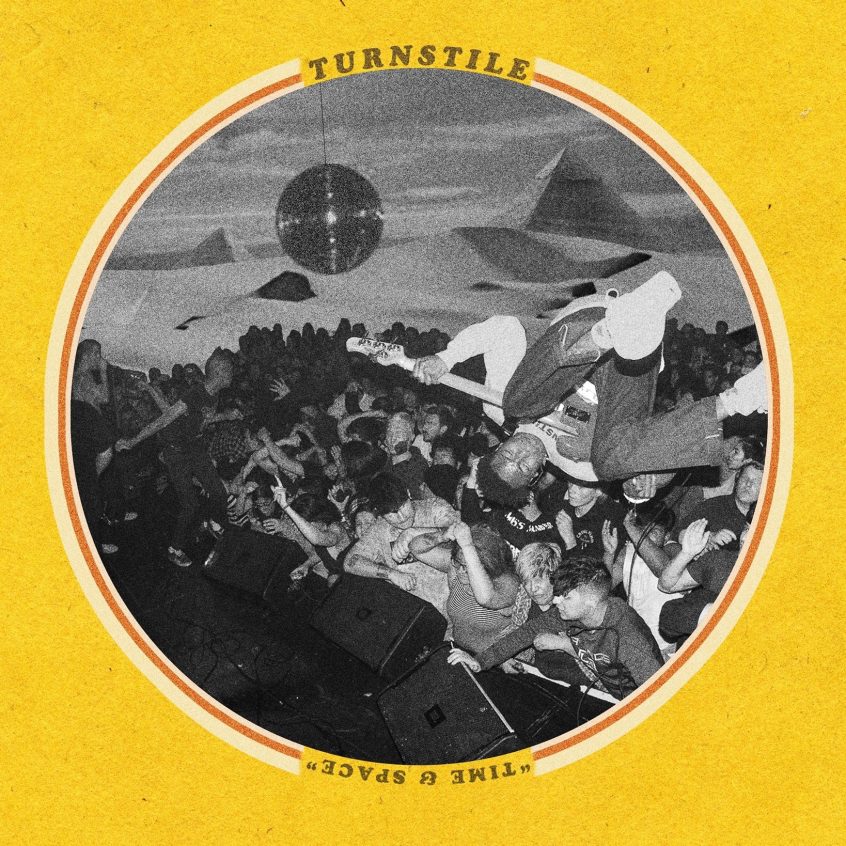 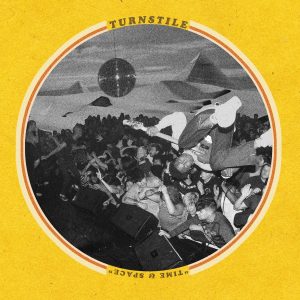 Making a name for yourself in modern hardcore is a difficult prospect, so that’s probably why Maryland’s Turnstile sound like an oldball mix of 311/Madball/Suicide Machines and bizarrely, Status Quo (more on that later) in order to carve their name into this overflowing musical landscape. Time & Space is their second album, hot on the heels of the arm-flailing, windmill-a-thon of Nonstop Feeling from 2015 and makes significant strides forward in places to be something slightly different from the norm.

There’s a distinct rap-rock feel to opening track Real Thing – the riffs and heavily accentuated bass are straight out of the Rage Against The Machine rule book of crunchy, mouth-watering guitar tones. Coupled with the melancholic backing vocal haunts alongside vocalist Brendan Yates and his unique, snapping howls this is a raucous and stubborn statement of intent.

The mic-swinging savagery of Big Smile can barely contain itself. The breathless ruin drummer Daniel Fang puts his kit through is teeth-rattling in the ferocity stakes. About 33 seconds in Turnstile appear to transform into Status Quo. Where that riff comes from, I’ll never know, but you can actually hear the guitar laughing with pure, unashamed pride – it’s a pure surf-rock, party slammer of sun-drenched fun and is aching to be another minute longer to make everything even more ridiculous. The posturing rap-hardcore stomp of Generator, is an absolute barnstomer, making the simple statement of how Yates is going it alone and moves through several stages, from the sudden shift to a more atmospheric, almost dub/shoegaze interlude that then throws you back into some chugging, melodic post-hardcore, complete with handclaps, a guitar solo and some morose and wistful vocals from Yates, who shows a lot more depth than his usual snarling bark.

On Time & Space, there’s plenty of gusto, passion, vigour that elevate this above a lot of other hardcore punk. Turnstile have crafted an album that bubbles with passion, raw feeling and life.

You know what we need more of, one note piano choruses in things! The ripping punk rock splatter of High Pressure delivers this in such a bizarre and wonderful way, you’ll be stabbing that imagery key with all your energy. The lurching roar of the song’s macho and large ham coda adds even more beef and volatile substance to Turnstile’s meaty hardcore swagger.

Moon gives the opportunity for bassist Franz Lyons to step behind the mic and show off his Michael Graves-sounding vocal chords, giving this track a mournful and sombre feel. It’s in stark contrast to the snapping bark of lead vocalist Brendan Yates and it works with Turnstile’s high-fives and stage-dives sound perfectly. The trouble with Moon is, immediately after hearing it, you want Lyons singing something else (he was also lead on Blue By You from their debut) his voice adds a different dynamic (not to say Yates isn’t doing a great job) but more variation in the vocal stakes is something Turnstile have overlooked on Time & Space and this track is one of their best works committed to tape.

Never drive your car to Come Back For More – there’s a chance you’ll be banned for life, such is the speed on this – see also the aggressive gait of the bro-core flamboyance of the noisy, Helmet-esque Can’t Get Away filled with some extra handclaps and squealing metallic guitar licks to confuse and surprise you at every turn. That’s what Time & Space does though – the hardcore-by-numbers feels so at home, but soon begins to flake, chipped apart by these erratic snippets that cut and chop away; similar to how The Chariot made their final album, One Wing so vital and interesting. I mean, Diplo – yes, that Diplo adds his producing skills to one track on this, the scrawling slam-pit rock bastard that is Right To Be; and why not because that’s not weird? The overly-synthesized vocals on the anthemic chorus, give it an unstable electro-rock feel, but the gang vocal chants of “THEY WANT TO TAKE! MY RIGHT TO BE!” are pure hardcore unity. It’s jarring, eccentric and…well, it works, I guess?

On Time & Space, there’s plenty of gusto, passion, vigour and little touches that elevate this above a lot of other hardcore punk, (notably, the superb production from Will Yip) meaning that Turnstile have crafted an album that boils and bubbles with passion, raw feeling and the adrenaline-pounding thump of life. For fans of modern hardcore, such as Touche Amore, Terrible Love, Show Me The Body and Trapped Under Ice – Turnstile are definitely pushing boundaries it feels, but perhaps need to lean a bit harder in certain places to completely break through to the other side. Whatever the case, Time & Space is bloody brilliant fun and one of my highlights of 2018.