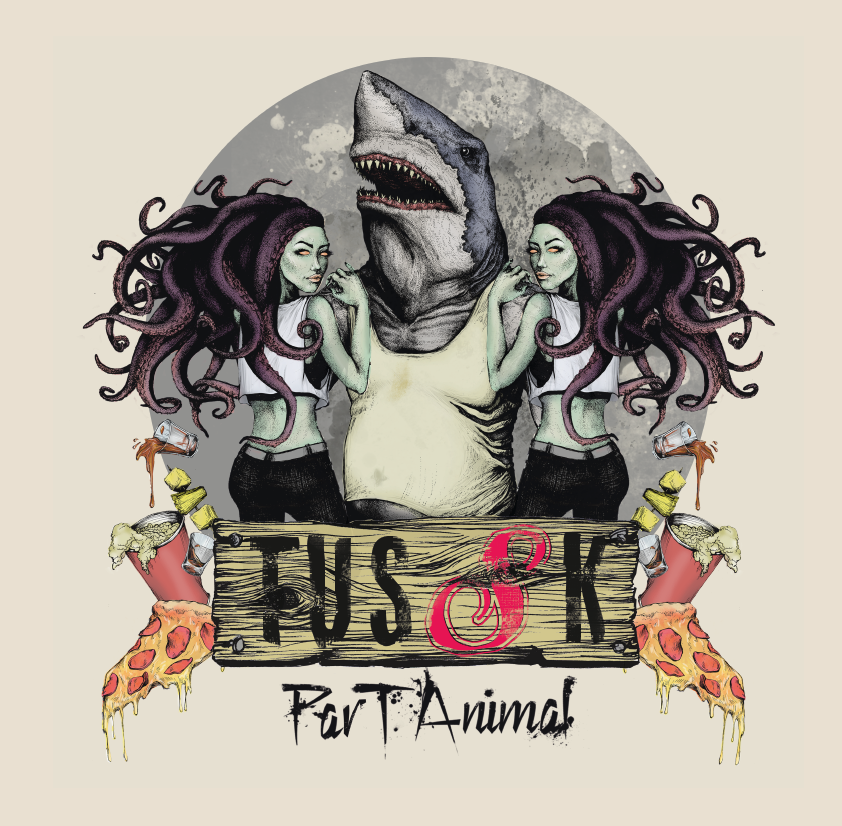 Good people, you’re in for a treat come April 11. Staffordshire’s Tussk, release their new EP, Part T Animal and it’s going to kick your arse. Founded back in 2010 (thanks Facebook), this five-piece of beards, tattoos and beer-hair bridge that gap between swaggering, southern rock, throaty, guttural hardcore all packed beneath a wall of meaty riffs and thundering drumbeats.

I’m surprised that I haven’t heard of Tussk before. Taking their name from an aerosol can and adding another ‘S’; this crew of motley individuals remind me a more of a punk rock Maylene and the Sons of Disaster, mixed with Hertfordshire’s Arms and the Man and of course, Neil Fallon’s Clutch.

Tussk bridge that gap between swaggering, southern rock, throaty and guttural hardcore all packed beneath a wall of meaty riffs and thundering drumbeats..

First track, Jazz Hammer sounds like Keith Buckley’s Every Time I Die at their scrappiest – raw, bleeding hip-shaking fury – vocalist Sean Beck croons, screams and seethes beneath the lurching, southern-rock guitar squeals, whilst the pummelling drums beat a deadly tribal rhythm of chaos. Next track, the brilliantly titled Double Drag Queen, has the foot-stamping rush of Clutch, circa Pure Rock Fury – complete with an infectiously melodic chorus, offset by the guttural, almost Mastodon-bellowing past the three minute-mark. The time change is a nice touch, bouncing back onto the rails of rampant, boastful, dirty-blues rock – you can taste the cigarettes and whisky on that grime-covered, slovenly riff.

Remember how savage, and barbaric Kvelertak sounded the first time you heard them? This feels uncannily similar – the mash-up of heavy metal, strutting rock ‘n roll and scything punk is utterly glorious; a chest-beating stage-diving hammer-blow of sweaty destruction.

You can pre-order Par T Animal from their rather impressive merchandise page and a rather spiffing Varsity jacket if you wish – fancy!