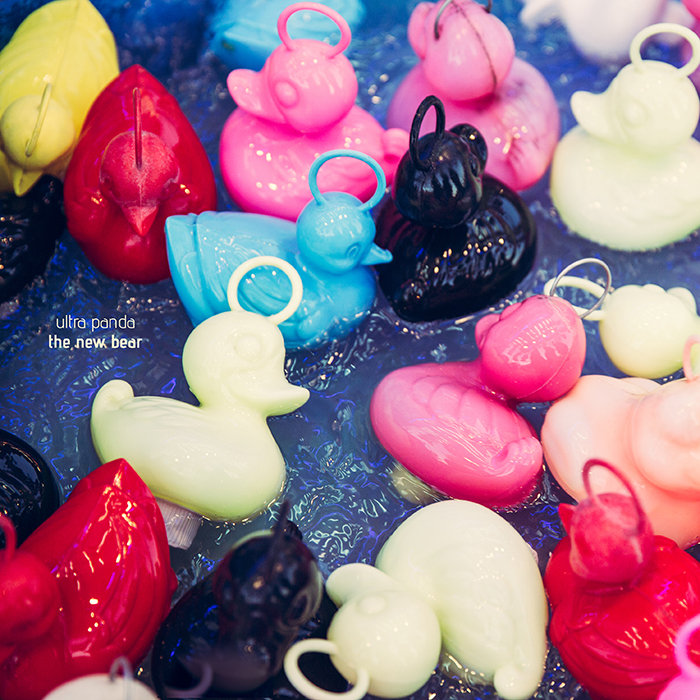 Still remaining in relative obscurity; France’s Ultra Panda still haven’t broken out of the underground. In fact, I’m betting they’re even too obscure for the underground; they’re hidden in the Upside Down. This group, comprising of three dudes, combine drums + bass + keys + voice to create their dizzy and turbulent sound. Two years ago I formed some words into an order of sorts to talk about their album, Satan, Salsa – which was an erratic dance-punk racket of wild rhythmic energy that barely kept still (and incidentally, one you should definitely check out).

Quite by accident, I stumbled upon their bandcamp again to find they’d quietly recorded an EP back in March, called The New Bear – a powerful and potent blast of 4 tracks in 15 minutes. Opening track, Hunter, begins with rolling drumbeats, a heavy synth-lead, backed by the grumbling bass. It has that fuzz-rock strut of Death From Above 1979 and the big hip-shaking chorus of Daryl Palumbo’s many, many dance-rock projects (*looks at Head Automatica*) sandwiched inside this keyboard-led throwdown. The next track, New Bear, is a somewhat more funk-led affair; you’ll want to dance to this, there’s no doubt – it’s a thrusting, limb-jerking slab of post-punk energy and technical riffage that mixes between moments of roaring heaviness to monitor-smashing, electro-freak-outs.

Dark Knight is a 2 minutes and 10 seconds blast of high-octane, frenzied bass-driven punk rock. This is microphone-swinging destruction, backed by the sashaying electronics, huge, growling bass attack and rapid fire vocal yelps this is a driving, rhythmic frenzy of recklessness and it’s fucking brilliant. In contrast, the weirdness is supplied in droves on MTGMA; a gloomy, almost Gothic-sounding track that drags itself forward through multi-layered vocal effects (seriously creepy) alongside some squealing strings (supplied by Quatuor 440). There’s an almost Greg Puciato-vibe to the vocals as well (reaching The Black Queen-levels of falsetto) which sit nicely with the orchestral chimes and post-hardcore build. Dream-like and drug-addled, MTGMA is perplexing, ending in a flourish of fractured strings, screeches and ghostly blips.

There’s no excuse not to get involved in this really – Ultra Panda are a strange, exciting and fulfilling rush of ecstatic delight.  Download the EP now. Alternatively, The New Bear is also available through Chanmax Records on CD.