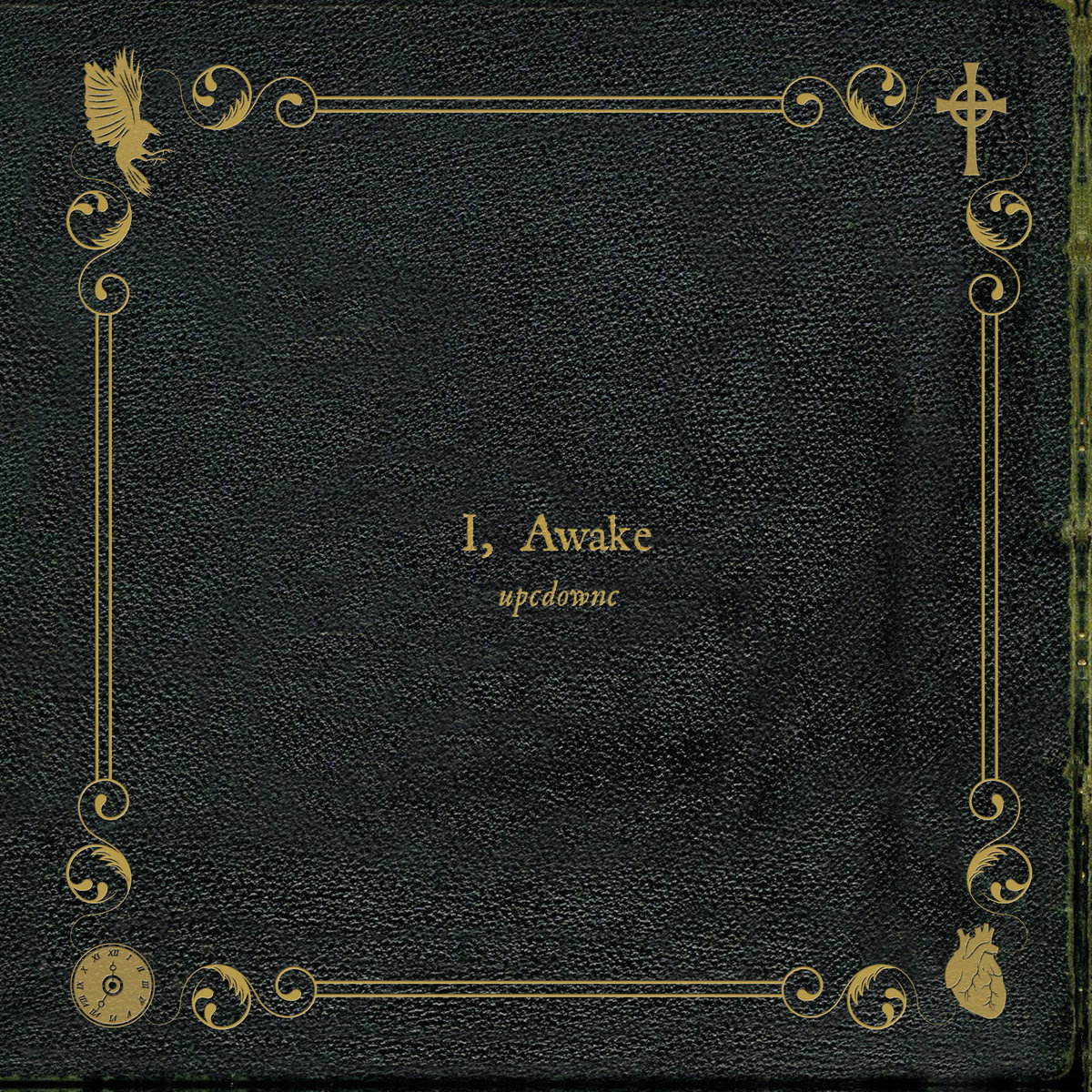 Band: UpCDownC
Album: I, Awake
Label: Self released
Release date: Out Now
Sounds like: The sound of the portal opening at the end of Evil Dead 2. Night terrors.

“Are you the strong one?”

Split into 6 parts, I, Awake, the new album from instrumental-post-whatever-noise dirtbags UpCDownC, is essentially not being able to sleep at night; it’s sticking your feet out the end of the bed and wondering if a clawed hand is about to grab hold. Sweet dreams.

You can hear the steady and slightly distorted snores and the sullen and heavy breathing. Soon, the Carpenter-esque synths creep in, the breathing intensifies, becoming more hollow and spaced out. The swell of the keys soon makes way for the rolling percussion and heavily down-tuned guitars, which hum and froth with this grinding gurgle. It staggers with jerking fits and starts – this rabid, maniac in a straight jacket, lurching their way towards you and it is bone-crushingly heavy. The riffs have become that haggard breathing we heard at the start; the throat has finally been cleared, making way for this grime-covered, silt-splattered, scythe of clawed-noise that belches forth. The moody-synth lines swirl and shimmer over this stark and grudge-filled cacophony and it’s a flailing, night-terror scream of wanting to escape. Will I awake?

Eye burst open, body covered in sweat. There’s a noise, it’s a sawing noise and it’s horrific. I don’t want to know what that is, but like a car wreck, you can’t help but take a peak. It continues, that relentless, looping sound of rusted, metallic teeth. I hope it’s not bone, dear god I hope it’s not bone. The guitars sound almost peaceful now, if it wasn’t for the Disasterpiece ambient noise creeping in under the door you could almost be in a form of serenity. The sawing has finally stopped and the guitars continue to shimmer and glisten, the aural equivalent of sunlight bursting through the window. We cannot always have nice things though. The ticking of the clock almost feels like a heartbeat as the frantic scrawl of rusted guitars, grinding bass and distorted drums hits with punishing force. Soon we are…

An eerie, wavering screech sharply cuts with the cries of possibly seagulls cuts through the mix. Is this the sound of your train coming to a sudden halt? Do you jump on board? Too late, you’re bundled aboard by the sound of a drum set, and several guitars colliding with you in a mash-up of twisted, battering scribble. We start to slow down, let’s all take a breather and assess the situation. Awake, yes – but with no real direction, lost almost. The solemn bass twang is again the rhythmic sound of a heart slowly adjusting its owner to the surroundings. Someone is following at a distance though; akin to Richard Vreeland‘s nightmarish score, this build of sullen and despondent pace grows and grows, festering like a pulsating, ugly boil before exploding in a hail of noxious pus. The hands reach as you fight them off, launching yourself away from the terror that is slowly unfolding through this heady wave of rasping fuzz-noise-chaos.

That ragged breathing is inside your own head. It’s you and for a brief moment you are away from the horror. All you can hear is some sinister giggling and a kaleidoscopic wail, morphing into the sound of a heart monitor…

It’s nice now. I think everything will be okay, the birds are singing, nature appears vibrant in colour. The guitars once again sound like a friend, they begin to shimmer and glow bright. The rising barrier of sound starts to envelop, to keep safe – an intricate and tight math-rock knot of twisted sound that keeps a tight and hopefully safe hold.

It’s fake though. It wasn’t safe at all, the guitars sound like hell; they roar and spit fire and the riffs are ugly, crunching slabs of dirt and silt raining down, burying, engulfing, choking. This dream will never be over, it’s reshaping into some nightmarish vision. Howling, torturous feedback oozes forth, splitting apart akin to John Carpenter’s The Thing. I know I’m human, but what is this? The ringing of the bell doesn’t stop, I must be awake now, right? This nightmare has to finally be over.

Has anyone got a stake? Or garlic? Oh shi- crushed, broken, fangs sink in as the creeping, horrific score settles to a dirge of bilious post-noise-meltdown. It’s now you sleep…forever.

Stream/purchase/have nightmares for weeks I, Awake by UpCDownC from their bandcamp below: