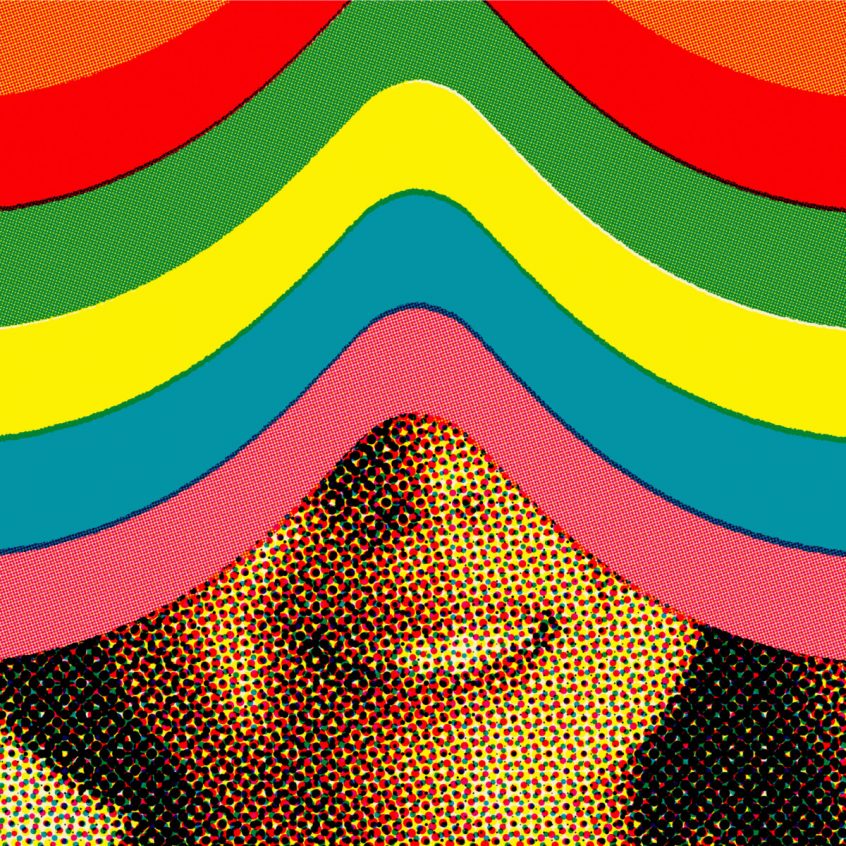 I’m not surprised that the *checks notes* fifth album from USA Nails is fucking nuts. They’ve progressed significantly from the Swami-esque punk of their debut Sonic Moist, through the heavy-oddball of No Pleasure, to the alienating Shame Spiral to the kraut-rock thump of Life Cinema, so it’s no surprise that Character Stop is USA Nails at their most expansive, aggressive and seething with rabid hostility.

The pounding thump of Revolution Worker opens Character Stop and right from the off I’m hooked. Lyrically, it’s the despondence of being stuck in a job with no way out and slowly stagnating, but with the added anxiety of fearing you’ll be sacked. The chant of “I worry, I worry, I worry I could go” which is overlapped by the robotic sadness of “I want to last longer, but I fear that I won’t” paints this picture of both abject misery of drudgery and constant panic, all held together with this ugly, noxious guitar slide, booming percussion, sludgy, bitterness and the driest humour imaginable.

I Don’t Own Anything gets in and out in around 80 seconds and USA Nails don’t waste a single moment – a rushing barrage of rambling noise-punk, backed by a delightful video of the band enjoying a range of ice-creams in a way that will make you never enjoy ice-creams again. Things continue to get more agitated on the indignant title track, ugly, post-punk guitars crash together, creating this fetid thunder of dislocated energy, whilst frontman Steve Hodson’s distorted yowl is buried under John Dwyer-levels of screeching feedback and chewing noise.

The sarcastic gloom of the deeply hilarious and self-deprecating How Was Your Weekend? Is summed up by all of the lyrics, especially the monotone chant of:

The chorus of “hello how was your weekend? Yeah it was okay, yeah it was alright” apes the absolute mundane nature of having to answer said question, certainly in response to those who clearly don’t give a fuck, backdropped by this shifting, doom-laden mire of echoing claustrophobia.

One of the big highlights is the shouting indignation of No Pleasure (also the name of their second album), with it’s swirling, Jehu-esque guitar attack, pummeling rhythm section, gang-vocal chants and the bolshie closing line: “Orwell was right, Warhol was right and I am right” delivered by Hodson with absolute zero fucks and all bile.

There’s a definite feeling the second half of Character Stop begins to show its true colours, as a slow reveal of the nightmarish entity that resides within. Take Preference For Cold, for example, a chilling, disgruntled slam of ugly, twisted bass-heavy savagery, bringing to mind the implacable noise of a Chris Spencer project. Easily one of the heaviest and dense tracks USA Nails have put to tape and one of their very best. I absolutely love what follows next in the form of Temporary Home, the torturous squeal of the guitars, the unchanging, monotone of the vocals describing sleeping on mattresses, and the oddly, joyous swagger, that’s coated in this toxic feedback.

Wallington closes Character Stop in the strangest way possible – instead of a raging wall of chaotic sound, you’re treated to a dread-filled creep of squealing, hollow-sounding guitars, whispered vocals, that switch between channels in a super-fucking creepy way. Lyrics such as “scratch out my eyes” and the repeated phrase of “I can’t pretend that I don’t know what I am doing” will seep into your consciousness whether you like it or not.

Five albums fresh and USA Nails continue with this ridiculous consistency and quality with their material – this is them at their most sardonic, their driest, their absolute pinnacle of making the kind of sounds you never expected, but so desperately needed. A challenging, captivating journey through a distorted and darkened looking glass of a mid-30s life.

You can purchase/stream/lose grip on reality to Character Stop by USA Nails, the family fun time band from London below.